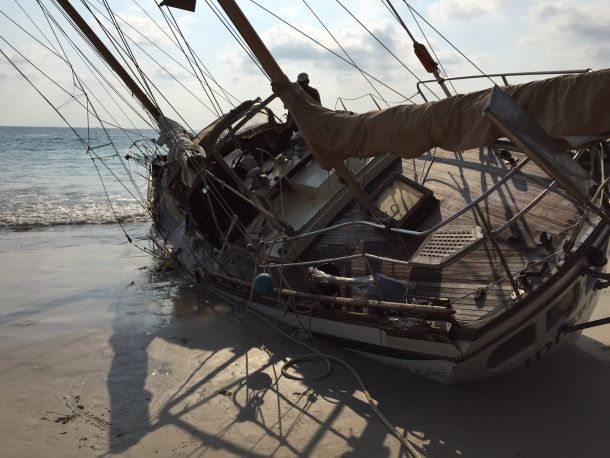 Below are some more images of the next stage in trying to refloat Innisfail off Kata Beach, Phuket.

Contributor on the ground, Martin Woolnough, reports in that an erroneous article was published in the Phuket Gazette and the link is included below providing more images. Woolnough notes that Mark Horwood reported in the story is not in charge of the salvage. He is advising and also providing people and his personal time free of charge. A Thai company, Chalong Boat Services, run by a Thai man called Manop is responsible for the salvage.

In the images included in the gallery below the boat can be seen to now be taking on water significantly through repeated damage caused by the tidal movement and from the slings used by the cranes earlier in the week attempting to turn the boat to sea. This includes damage to the mizzen mast and rigging.

In other shots can be seen the flotation devices readied for the next attempt.

We shall keep mysailing posted.