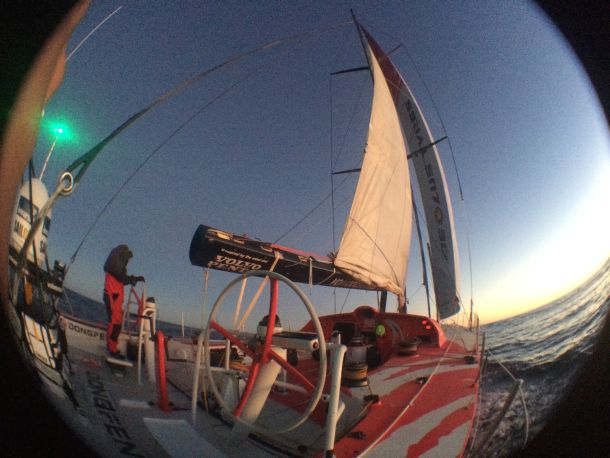 ITAJAI, Brazil, April 9 – Two days after Leg 5 of the Volvo Ocean Race was completed with Team SCA’s arrival, Dongfeng Race Team were in a desperate battle of their own on Thursday to transport their stricken boat to Itajaí for the fitting of a new mast.

The Chinese team (Charles Caudrelier/FRA) were forced to retire from the event’s toughest leg on April 1 after their mast fractured in the Southern Ocean, 200 nautical miles (nm) from Cape Horn. They found refuge in Ushuaia, Argentina, and a team of shore crew members plus Chinese sailors, Wolf (Yang Jiru) and Black (Liu Xue), are now sailing Dongfeng under motor and sail to Itajaí.

The entire project is geared around having a fully fixed-up boat ready for the Leg 6 departure for Newport, Rhode Island, on April 19. But what if they don’t achieve that? “If we don’t make it? It will be the end of our project as we know it,” said Team Director, Bruno Dubois (BEL).

The best-case arrival time for the boat in Itajaí, according to a team statement issued on Thursday, is Monday, April 13. The crew is currently 1,000nm from their destination in the south-east of Brazil.

Meanwhile, a separate journey is underway with the mast being flown from Dubai, via Amsterdam, to São Paulo, Brazil. From there, it will be driven to Itajaí once it has cleared customs. The arrival time for the mast – with a ‘best case’ scenario, say the team – is also Monday.

Dongfeng Race Team’s statement continued: “However, that will just be the beginning of our race against time. Once we have the boat and the mast, there is the work that normally takes a week to do in half that time – to prepare the boat itself after the tough leg from Auckland, and to prepare, set up and tune the new mast and rigging.”

It continues: “Now calculate the odds of everything running smoothly. As it stands, we have no idea if the truckers will be willing to drive over the weekend. So best case scenario, the rig and the boat both arrive in Itajaí on Monday as planned. Otherwise, the rig arrives two days later and we struggle to make the Team Vestas Wind Itajaí In-Port Race (Saturday, April 18).”

The clock continues to tick, but shore crew member, Henry Woodhouse, who is currently helping sail the boat through the south Atlantic to Itajaí, remains bullish. “Look out Brazil, here we come,” he wrote in a blog from the boat on Wednesday evening. “We may be late arriving, but we will be on that start line for Leg 6 ready to return with a vengeance.”