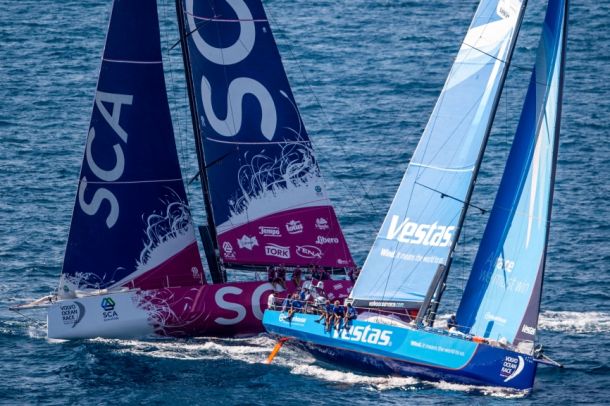 ALICANTE, Spain, September 2 – Team SCA and Team Vestas Wind, rivals in the Volvo Ocean Race 2014-15, go head-to-head once more in a series of pro-am races at the popular Genoa Boat Show from September 30 to October 5.

The six pro-am races will give the race’s Italian fans the first chance to see Volvo Ocean Race boats on home waters and provide an intriguing challenge for the crews of Team Vestas Wind and Team SCA which will be named at a later date.

The teams will be matched in two daily pro-am, in-port races on September 30, October 1 and 2 before they join a Genoa Boat Show fleet race on Saturday, October 3.

Team Vestas Wind skipper Chris Nicholson, whose Danish-backed challengers bounced back from near disaster in the second leg last November when the boat was grounded on a reef in the Indian Ocean, was very much looking forward to taking on Team SCA’s all-women crew again.

“The last time we were in Genoa, we were on our way to Persico Marine to repair our Volvo Ocean 65, so it’s very special to be able to be back in Italy racing our boat,” said Nicholson. “The Vestas Wind is in great condition and the team still has much more to give, as fans saw when we returned ahead of Leg 8 of the Volvo Ocean Race in Lisbon. I’m proud to represent Vestas at the Genoa Boat Show and look forward to competing against Team SCA once more.”

After the race finished in Gothenburg on June 27, the blue boat sailed via its home port of Copenhagen to Race HQ in Alicante, Spain, for routine maintenance. It will depart for Genoa the weekend before the Genoa Boat Show starts on September 30.

They will face stiff competition in Genoa from Team SCA who finished third overall in the In-Port Race Series of the Volvo Ocean Race and then beat event rivals Dongfeng Race Team in the Artemis Challenge during Cowes Week last month. They also impressed during the Fastnet Race, held during the traditional sailing festival on the Isle of Wight.

Anton Albertoni, President of the Show’s organizing body, I Saloni Nautici, is delighted to welcome the two crews to Genoa. “The Volvo Ocean Race brings the pinnacle of offshore racing to the Genoa Boat Show,” he said. “For the show's visitors, though, this is not an invitation to dare but to meet those men and women who have made the sea their passion, their lifestyle, their daily pleasure.

“Those who face such challenges have the ocean at heart and having them in Genoa represents a true celebration of the sea. That's why we are very happy to welcome the women from Team SCA and the men from Team Vestas Wind.

“Moreover, the Volvo Ocean 65s have been built and fitted with some of the best Italian marine technology and the Genoa Boat Show is all about Made in Italy.”

Team SCA squad member, Carolijn Brouwer added: “It was great to have the team back together again for the Fastnet Race, and we were happy with our performance. We look forward to, once again, locking horns with Team Vestas Wind, and meeting many of our Italian supporters at the Genoa Boat Show.”