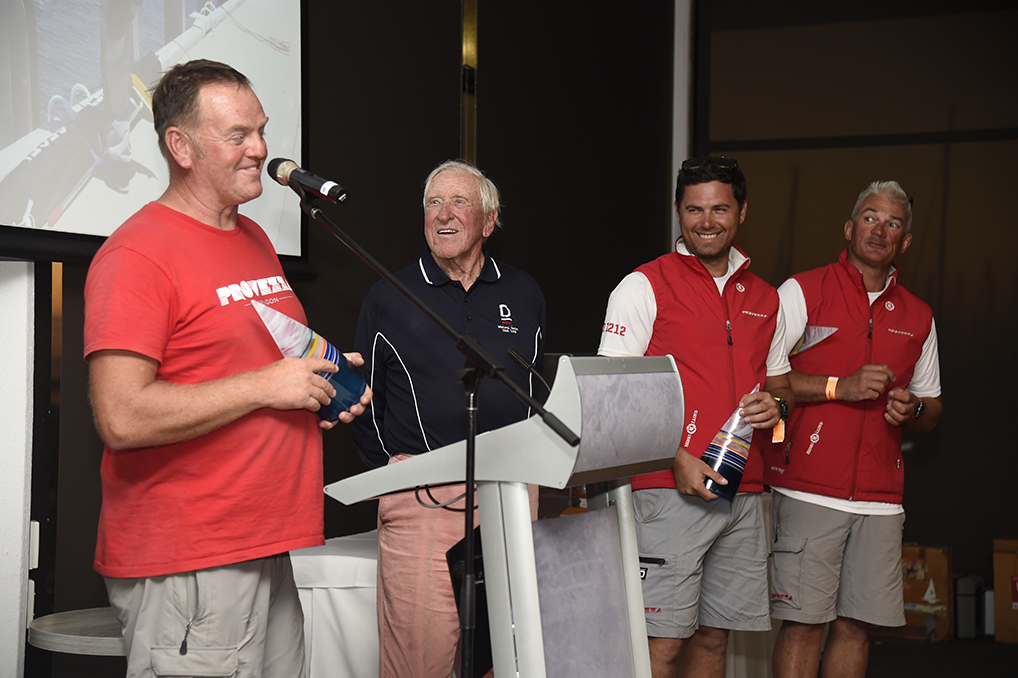 It was quite a hard slog for the Turkish flagged team with the current world champion crew of Andy Beadsworth, Ali Tezdiker and Simon Fry to grind out victory to win their first Prince Philip Cup in Fremantle, Western Australia.

They went into the final day of racing with a slender two point margin over local ace Willy Packer and his team of Scoundrels, Julian Harding and Jock Packer who represent the host club Royal Freshwater Bay Yacht Club.

After what could have been a major drama for the organisers, the start/committee boat had taken on a lot of water and was very stern heavy as it sat waiting for competitors to arrive. The skipper Peter Hay decided it was best to return ashore and swap all the equipment from boat to boat than to stay and risk further problems afloat. Host venue Fremantle Sailing Club did a great job of organising a lift out and replacement vessel to get the show back on the road again. Incredibly with the work of dozens of highly experienced volunteers, the first start was only delayed by 30 minutes.

Once set up race 7 started at 1235hrs in a weather phenomenon that only occurs in Fremantle about 1-2 times a month. That is clouds and semi-overcast skies. There was even a few light drops of rain to cool competitors down. The winds however were a lot lighter than for the last few days, never really blowing more than 14 – 15 knots.

At the start, Andy Beadsworth tried to steer Provezza into a tight space at the committee boat and ended up mounting Willy Packers, Scoundrel, copping a penalty for his troubles. As the seas were so much flatter with a much smaller chop, the rest of the fleet chose different sides of the course upwind.

At the windward mark a sight we were not used to sprung before our eyes. The Dutch spinnaker of Olinghi with Charlotte and Juliette ten Worlde, Pedro Andrade and Janka Holan popped out ahead of multiple Prince Philip Cup winner, Nick Rogers and his crew, Leogh Behrens and Simon Burrows from Tasmania. Third round was Fever with Klaus Diederichs at the helm joined by Jamie lea and Diego Negri.

These three boats got away from the rest of the fleet on the long run back to the leeward gate. The Dutch team rounded 36 seconds in front as they headed back upwind for the second time. Fever remained in second but Annapurna skippered by Anatoly Loginov and crew Vadim Statsenko and Alexander Shalagin got past Nick Rogers in Karabos lX.

Olinghi cruised through the finish line hugging and whooping for their first race win of the series. Fever finished second and Annapurna third. Both leaders of the regatta, Provezza were down in 8th followed by the Scoundrels in 9th.

At this time the Turkish flagged team were ahead by 4 points from the Western Australians with the Russian team of Annapurna quietly closing the gap.

Andy Beadsworth and his highly professional Provezza team set out to keep a close hold over Willy Packer but did not sail their best races of the series.

The final race start was clear at the second time of asking and the breeze just turned up a notch for a while. The sun also made a brief appearance as the afternoon wore on. It was back to normal with the majority of the fleet concentrating on the left/inshore side of the beat. Around the top this time was the same two boats as in the earlier race. This time it was Klaus Diederichs in Fever representing GBR ahead of the Dutch girls sailing Olinghi with Pedro in the middle of the boat. Third round was local RFBYC boat, French Connection steered by Ron Packer and crewed by Americas Cup winning crew John Longley and Matt Maxted.

At the bottom gate NED411 in the Dutch colours squeezed inside Fever to round inside. Meanwhile Simon Prosser, Mark Glew and Stephen Wray from host club RFBYC had sailed an excellent downwind leg to round in third just ahead of Grant Gordon’s Louise Racing.

As course 1 had been shown at the start of the final race, the second run was followed by another 1nm upwind leg to the finish. At the bottom gate second time around it was again very close at the front of the fleet. With what seemed like really good boat speed in the slightly lighter conditions. Charlotte ten Worlde steered Olinghi to another bullet much to the delight of the watching spectator boats. She crossed the finish line just a boat length ahead of Klaus Diederichs and his British team. Third to finish was Anatoly Loginov’s Annapurna. Back in an uncharacteristic 8th was the eventual Australasian title winners, Provezza. Willy Packers, Scoundrels were back in 10th.

And so Andy Beadsworth, Ali Tezdiker and Simon Fry won the Prince Philip Cup for the first time showing overall dominance over the rest of the fleet. Willy Packer, Julian Harding and Jock Packer just held on to second overall and are also winners of the Corinthian trophy. Only one point behind was Annapurna sailed by Anatoly Loginov, Vadim Statsenko and Alexander Shalagin.  With a run of consistent results local WA sailing legend Peter Gilmour and his Yanmar Racing Team of Yasuhiro Yaji and Sam Gilmour representing Japan came fourth overall and a long way back in fifth was Grant Gordon sailing Louise Racing with crew Ruairidh Scott, Sophie Weguelin and James Williamson.

The trophy presentation was made that much more special by the sight of Dragon legend Gordon ‘wingnut’ Ingate regalling his long history of sailing the class and how he won his first Prince Philip Cup before most people in the room were born!

At the young age of 92 years, Gordon handed out the trophies with a personal touch as the room remained silent lapping up every word he said. A special moment indeed to bring what has been an outstanding event to a close.

The fleet now enjoy a days break and re-coup before the start of the 2019 Dragon World Championships that take place with racing every day from Friday 4 – Weds 9 January.

“We just had a little sub plot really, we just needed to make sure we had a handle on Willy. Unfortunately we made a mistake in the first race at the start and that was not in the plan, to be doing turns just off the start. But we ground it back, we are going fast, we are good in the conditions, there are lots of positives to take, but it is still frustrating to not be in the top few. But we had a job to do today and we did the job.”

“We nearly lost second place, it wasn’t very bright. We put up a flat jib today and went very, very slowly and Willy who should know the local conditions thought it would be smoother out there, but it was not! That was harsh.”

“Apart from that we just seemed to get on the wrong side of the shifts. But really the Dutch girls sailed so well, I have never seen sailing like that, to get two wins was just smoking hot. So well done to Pedro and the girls.”

“Also well done to Provezza they out sailed us, they are such a professional team but we will be out to fight another day at the Worlds.”

Charlotte and Juliette ten Wolde and Janka Holan – Olinghi on their amazing turn of speed today to score two bullets:

“We looked for some really good wind shifts and the winds were a bit lighter and after New Year's Eve we had to kind of recover so we had a very good sleepy day were we all took enough beauty sleep so we could perform again.”

“I guess our speed is just a secret.”