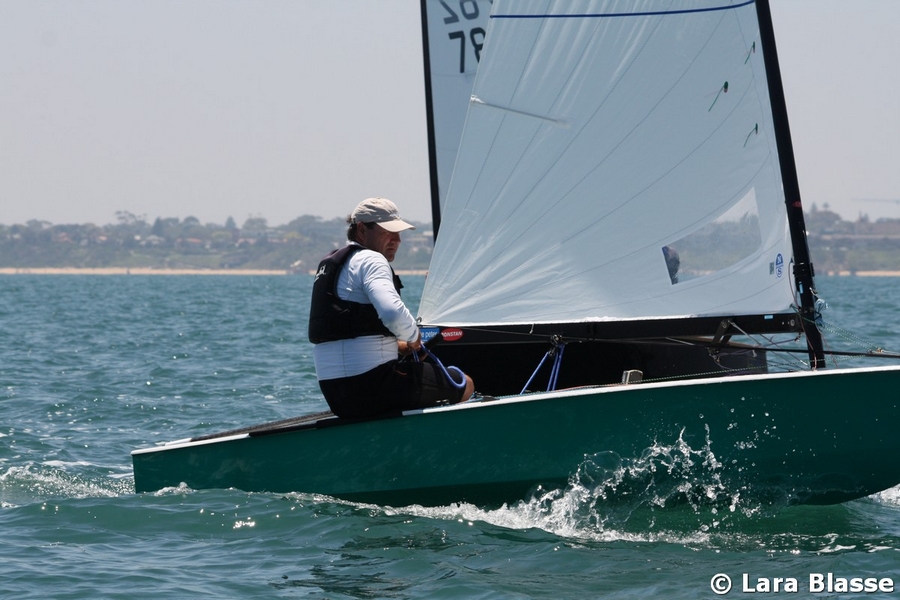 The final day was another day for the lightweights. An earlier start and the beginnings of a sea breeze was enough for the Race Officer to send the fleet out in 2 to 4 knots for the scheduled midday start. Two races were scheduled with a cut off time of 15.00.

Race 9 belonged to three Kiwi expats, who seem to have an affinity for light winds. But it took several false starts and a 45-minute postponement to get the race away in a very light south-westerly breeze. It eventually started cleanly under Black Flag and the fleet split and pressed upwind in 6 to 8 knots. Initially the right looked great, then the middle and finally the left.

At the top mark it was a very different leading group with Peter Robinson, AUS 774, leading Kelvin Holdt, AUS 708, Grant Wakefield, AUS 776, David Ketteridge, AUS 725, Shane Smith, AUS 33 and Elizabeth Williams, AUS 759. Only Tim Davies, AUS 779, from the 'heavy weights' was with the group. Regatta leader Roger Blasse, AUS 749, was buried very deep. It turned into a great light weather tactical race in a very slowly building breeze. Wakefield passed Robinson down the run to round the last mark in front and lead up to the finish. Holdt also snuck in front of Robinson to get second with Ketteridge in fourth.

Wakefield said, “After my third place in the invitation race, I knew I had good boat speed in the 5-8 knot range and so did my best to find a clear lane off the start and just worked on letting the boat have good speed and working the lifts to find myself in third behind Kelvin and Peter at the top mark. From there I got past Kelvin on the first reach and held that to the bottom mark and then followed Peter to the top. We’re were all still very close but I managed to sail through Peter on the square run to round the last mark in the lead. From there I just had to keep the cover and avoid the wind shadow from the fleet approaching the bottom mark.”

“I’m very happy to have my first nationals heat win and to move up to 10th overall.”

With Roger Blasse back in 13th and Jackson in 8th, they had both done enough to secure first and second, though they both eventually discarded this race. However with Brent Williams in 10th, the points for third had suddenly closed up.

The sea breeze was continuing to build and at 14.25 the Race Officer was keen to go into sequence, immediately raising the Black Flag and the fleet got away cleanly at 2.30 with half an hour to spare before the cut off. Jackson and Davies fought for the pin, but it was Davies showing great speed out to the left in the 10 to 12 knot southerly. Davies rounded first, with Brent Williams close behind in second. Both were racing for third place over all, so were keen to keep close together. Roger Blasse had a good first beat and was in the mix along with Grand Masters leader Bruce Ashton and Robinson.

The second beat was again very tactical on the shifting and settling breeze and it appeared certain the conditions experienced yesterday were not going to be repeated. In the end Davies held on to win from a very close battle between Blasse and Williams, Williams getting the honours. Blasse crossed third, followed by Robinson and Holdt with fellow under 80 kg class members Gary McLennan, AUS 678 in sixth, and Shane Smith, AUS 33 in seventh.

Davies commented, “Really pleased to finish the regatta on a high note, with a win. Today I had to balance the chance of catching Brent with the risk of a bad race, which could allow the guys behind me to catch up. The BFD earlier in the regatta meant I couldn’t make any mistakes.”

“I felt that I did as well as could given the circumstances. Brent sailed really well to stay in touch. It was a great contest. Now the focus is the Worlds in a few weeks time. It’s going to be lots of fun.”

Jackson finished the week with two eighth places. “Very tough day for me and a hard way to end a ten race series with my two worst results. I actually thought I sailed quite well but it was such a perfect light wind day, the under 80 kg sailors were just fast. They are all great sailors from the front to the back, so when they get their conditions, it is a great leveller.”

“Roger was dominant. Over ten races he won seven. I thought my regatta management was good, but Roger was just better. But I was happy to finish in front of Brent and Tim as they are really tough to beat.”

“I loved yesterday, not so much today. My gear is good and locked in, VYS Delfs, C-Tech mast and Turtle sails.”

While the OK Dinghy nationals have ended, Black Rock YC has a few days respite before hosting the Ronstan Australian Finn Nationals next week, an event in which Jackson is also competing.

“I start the Finn Nationals on Tuesday. I am looking to take a few races off the top guys… just kidding. Finn sailing is fun for me. No expectations.”

For the OK Dinghy fleet, next stop is the World Championship in Auckland, New Zealand, which has attracted an entry of more than 110 boats. Around 20 Australian boats are now being packed in containers to send across the Tasman for the start of the championship in early February.