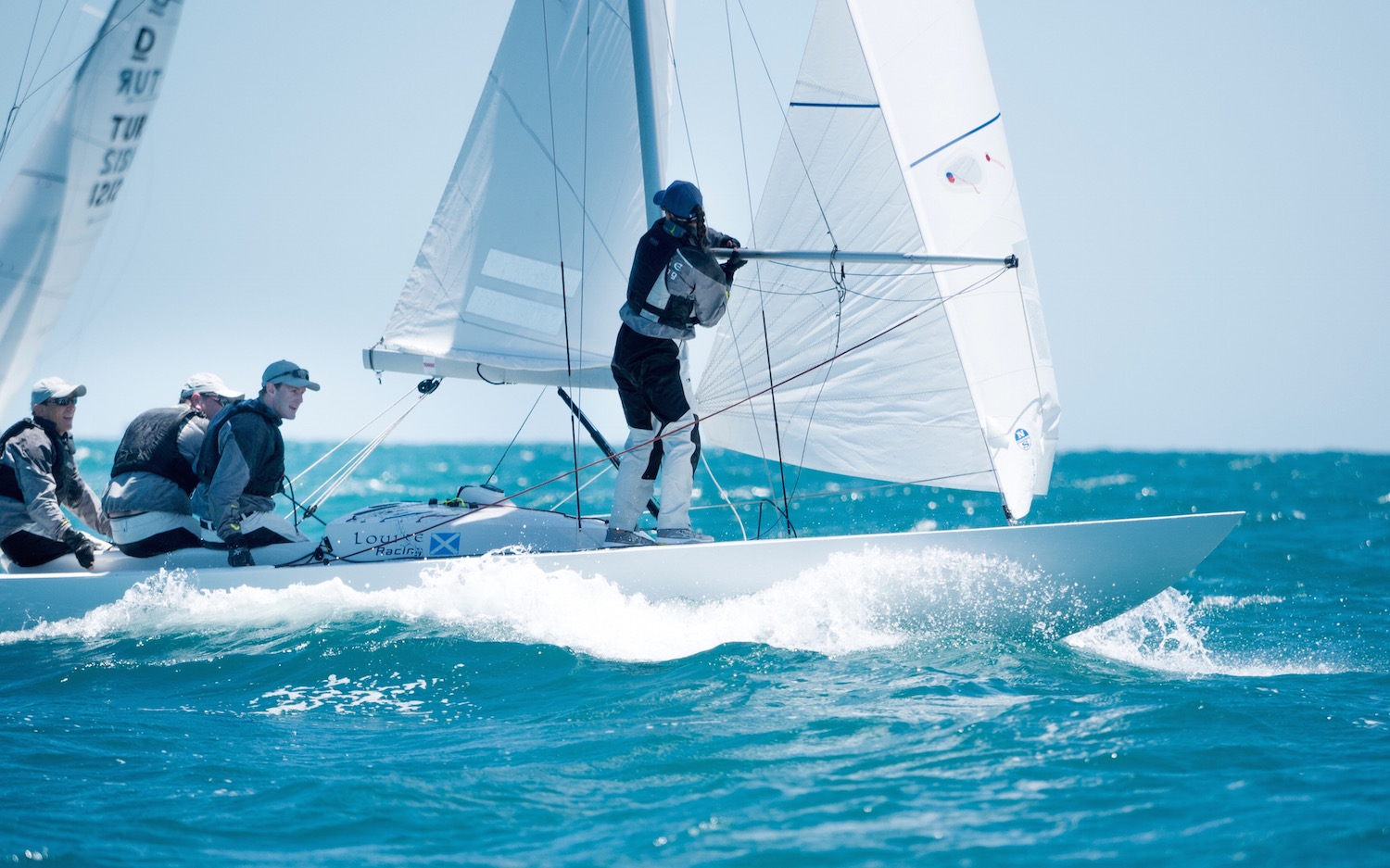 Grant Gordon and his team of Ruairidh Scott, Sophie Weguelin and James Williamson showed the rest of the Dragon fleet the way to go on day one of the 2019 Dragon World Championship, held on the aquamarine waters off Fremantle in Western Australia.

Only one race was scheduled for day one to ease the fleet into the start of six days of racing in the choppy waters off Fremantle. An early start time of 09.35 hours was set due to the forecast of strong south- westerly breezes that regularly build to a full ‘Fremantle Doctor’ during the summer season in Fremantle.

After a short delay, the first race of the Championship got going at 10.25 hours in a light and shifty breeze bouncing around between 180-220 degrees. Right on the start gun, the wind pressure wobbled between 8-12 knots.

After one false start, the fleet was split separated across the whole course upwind. Both the current world champions, Andy Beadsworth/Ali Tezdiker/Simon Fry on Provezza (TUR) and Willy Packer’s Scoundrel got bogged down tacking in fickle winds at the committee boat end, but Grant Gordon’s, Louise Racing team broke free, heading offshore on the rights hand side of the race track, timing his tacks perfectly to snatch an early lead.

At the first windward mark Louise Racing rounded clear of two Dragons representing Russia; Dmitry Samokhin skippering Rocknrolla and Anatoly Loginov sailing Annapurna. The lead pack picked up a bend in the breeze to the right and an increase in pressure to around 10-12 knots and so gybed early to soak down ahead of the bulk of the fleet.

Gordon’s Louise Racing had a 30 second lead at the bottom gate followed by a cluster of boats all wanting one side of the gate. Dmitry Samokhin parked up with a kite tangle allowing Provezza and Peter Gilmour’s Yanmar Racing team from Japan to slip inside. Mid-fleet was full of many Corinthian teams fighting their own personal club battles.

The second upwind leg was shorter as per the sailing instructions but the fleet was again equally spread across the course. As the breeze gradually increased to 15-16 knots Gordon’s blue kite popped up around the final mark rounding with a clear lead. Provezza, skippered by Beadsworth, had clawed back to second place from Anatoly Loginov’s Annapurna in third.

Gordon just had to keep a close cover on the mass of coloured spinnakers to take his first win of the 2019 World Championship by 43 seconds. Beadsworth crossed second, and a very close fight for third resulted in Peter Gilmour’s Yanmar Racing Team pipping Anatoly Loginov’s Annapurna, which sailed the last leg with a ripped spinnaker. Anatoly did well not to lose more places.

Ruairidh Scott commented on his teams comfortable race win today: “We were pretty confident that the breeze would come from the right at some point, so we started near the committee boat and were keen to get right as soon as we could. We got a tack in pretty early; we were going pretty quick and balanced it a bit from there.”

“The rest of the race was fairly simple from there, we gybed and laid down on port on the run and then we defended the right up the second beat and as the breeze started to fill in it was relatively straight forward from then on.”

Another GBR registered team, Klaus Diederichs, sailing Fever with Jamie Lea and Olympic sailor Diego Negri, finished fifth, while Pieter Heerema with crew Lars Hendriksen/George Leonchuck were sixth in their first race sailing off Fremantle. Pieter was one of the last boats to arrive and launch after missing the Prince Philip Cup.

Rocknrolla had to recruit a replacement local sailor in big Jasper Harding to fill the big sailing boots of Alexey Bushuev (The Bear) who himself had to withdraw from competition at late notice.

Willy Packer and his crew of Julian Harding/Jock Packer finished about a second behind Rocknrolla over the line, causing Julian to give out a large grunt of annoyance as his son beat him over the line. Willy Packer’s Scoundrel was the first Corinthian team in race one of the series.

Other Dragons recording good performances include host yacht club (Royal Freshwater Bay Yacht Club) member Ron Packer with John Longley and Matt Maxted. After a poor start, Packer recovered to finish 10th on the water ahead of a big bunch of Dragons engaged in close combat.

Another good performance on day one was Stephen Locke sailing Taranui with Reubin Rosolin and Patrick Vos. The young Western Australian team suffered a broken tiller racing in the PPC and had a replacement carved by local boat builder, Mauro Vischi, made out of American White Oak. The work of art was clearly an enhancement.

Also enjoying a first day were the Belgians, Xavier and Anne Vanneste and Karl Odent, who were getting used to sailing off Fremantle.

Anne describes her first experience of racing off Fremantle: “We were expecting a lot of wind since everybody has warned us this week. When we got out on the race course it was not too windy actually but it did indeed build up quite quickly.

“The race course is nice, its beautiful waters, very clear and we saw a dolphin. We were the first boat out and we had the company of a dolphin so that was very beautiful. We ended up 20th in the race and we are very happy with that.”

Sailors were ashore by midday before the predicted ‘Fremantle Doctor’ had a chance to build.

Racing resumes on day two of the championship with two races and an earliest start time of 1005hrs. Again the breeze is due to be lighter in the morning building later in the day.