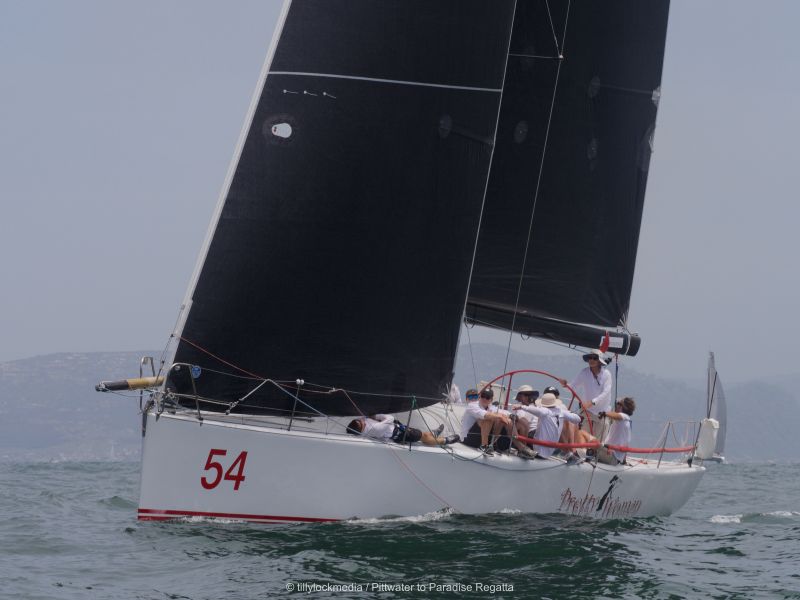 Richard Hudson’s Farr 45, Pretty Woman, continues to lead the monohull fleet north in the Pittwater to Paradise Race, however “Highly Sprung” is sticking to Pretty Woman like “bees to a honey pot” and has a handy lead on IRC overall.

It’s been no rest for the wicked. Pretty Woman crewmembers’ Liam Bennett, James Farquharson and Michael Lockley all just finished in the Sydney Hobart and flew straight back to compete in the Pittwater to Paradise. And the race has turned into a real endurance battle.

“I’m getting sick of tacking all the time” said an exhausted Liam Bennett. “Even when off watch, we are constantly having to change bunks each time to the windward side.”

Bennett was referring to the strategic course the fleet is sailing, which is seeing nearly all the boats hugging the coast line to stay out of the south-going current.

A little further back from the battle at the front, Ocean Gem and Wildflower 2 seem to be having a great battle of their own, with both boats having their own match race up the coast. Both crews are doing their best to keep these cruiser racers up to speed and out of the adverse current, and are within shouting distance of each other at times.

Rushour, the lone horse left in the multihull division, is continuing to power away from the fleet as even though in their own words they “have throttled back a bit”, due to their other multihull competitors retiring. Rushour, however is still hungry to be the first boat across the line.

Enigma has made a bold move and has gone east out to sea, and is the furthest offshore of the fleet. Time will tell if this bold manoeuvre pays off, however, in the meantime Enigma has a few miles to try and get back.

Meanwhile back on land is the Mad Jack  crew, who are already planning their 2020 race. We caught up with owner Greg Black earlier today: “As we wish the remainder of fleet in the Pittwater to Paradise Regatta the best for the race north, we wanted to provide an update on our injured bowman.

“Louis ended up with a broken ankle and is now back in Brisbane with a cast on his ankle. Good to see he is still wearing the MJ shirt and with a smile on his face.

“We were fortunate to have an incredible crew for the race who all worked together through a difficult time. Thank you, team!! An extra call out to our navigator (and fortunately for us a trauma surgeon) Professor Michael Muller, who had his hands full and did an incredible job on a 35ft yacht belting into a lumpy sea.

“Lastly, thank you again to Craig, Tommy and the entire team from The Royal Prince Alfred Yacht Club – RPAYC, who were exceptional. We’ll be back,” an upbeat Greg commented.

At this stage the race leaders are are expected to cross the finish line midday tomorrow (Saturday 5th January). We encourage spectators to join the Southport Yacht Club and take your boat just off the seaway and welcome the crews as they arrive at Southport .

Following the 370nm category 2 ocean race is the Southport Yacht Club’s spectacular summer offshore sailing regatta, the Bartercard Sail Paradise series. Four days of racing will be staged on the beautiful ocean waters off the Gold Coast’s golden beaches from Sunday 6 to Wednesday 9 January 2019. Both events have been combined to create an offshore series for competitors and the ultimate winner of the ‘Pittwater to Paradise Regatta’.