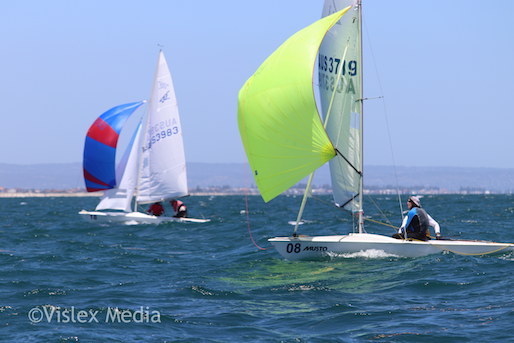 Race 3 was a windward / leeward course of two laps with a course bearing of 200 degrees and the distance of 1 nautical mile.  Weather conditions were ideal for F15 racing, the wind was warm at 10 to 12 knots with a moderate swell.

All Flying Fifteens got a clear start, no recalls.  As the race progressed the fleet gradually spread out. First to round the lee mark was the ‘Glamour Buoys’ (Greg Leaversuch and Peter Barblett from the Royal Freshwater Bay YC), followed by ‘Firefly’ (Philippa Packer and Dean Mcaullay, also from (RFBYC) and ‘Tuffan Up’ (David Yu and Chris Nelson from RFBYC).  The wind gradually dropped during the race causing the fleet to further separate.  First, second and third places remained the same until the finish.

The course for Race 4 was a loop, triangle, loop.  The wind had gone around to 210 degrees and dropped to about 9 knots.  A number of competitors were a little too eager get a good start and a general call resulted but all fifteens were better behaved for the second start.

‘Fforeigner' (Simon and Aileen Lucas PRSC) had to withdraw after breaking a spreader.  The first boats to round the first lee mark were ‘Ineffable’ (Nick and Enfys Jerwood from South of Perth YC, Tuffan Up (David Yu and Chris Nelson RFBYC) and Ark (David Tabb and Dave Bennett).

These boats maintained their positions the second time around the lee mark but the breeze increased to about 13 knots causing a few position changes.  On the podium for Race 4 was ‘Ineffable’ (Nick and Enfys Jerwood, (SOPYC) first, Tuffan Up (David Yu and Chris Nelson, RFBYC) second and Firefly (Philippa Packer and Dean Mcaullay, RFBYC) third.

Ineffable (Nick and Enfys Jerwood, SOPYC) currently lead the series ahead of Tuffan Up (David Yu and Chris Nelson, RFBYC).

The regatta runs from 31st December to 5th January and race results can be found here: