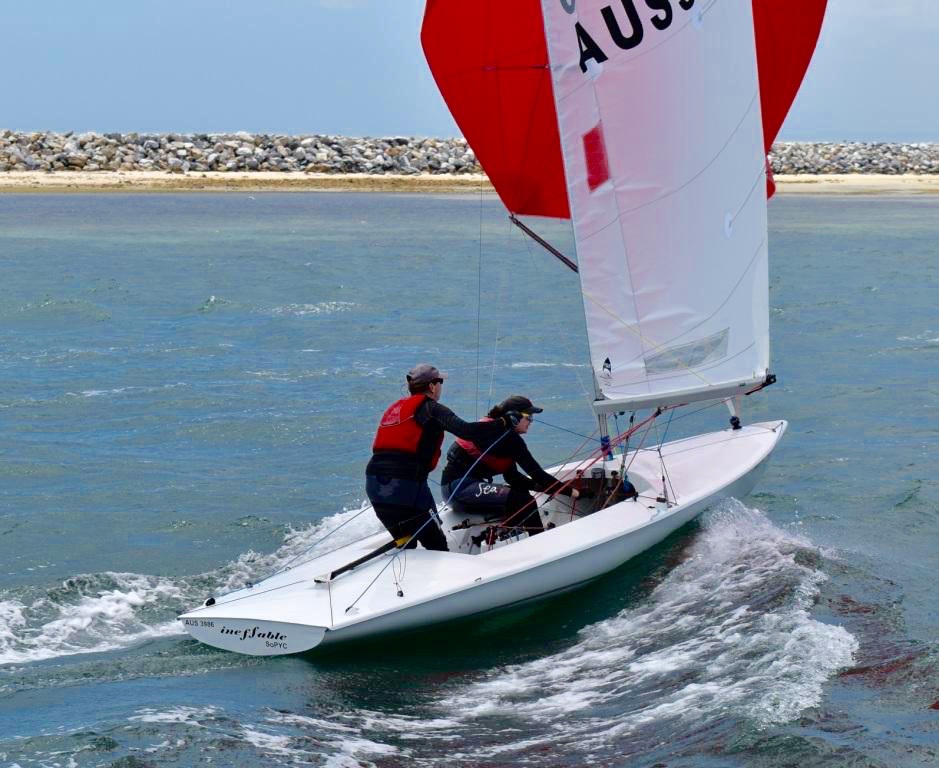 The Flying 15 Nationals are now underway at the Royal South Australian Yacht Squadron.  28 boats are competing in the championships with boats from Western Australia, South Australia, Victoria and Queensland.

Weather predictions for Gulf St Vincent were for warm weather with a SE breeze building from 10 kts to a breezy 20 kts by late afternoon.

The racing was close with the fleet remaining fairly close for the entire race, with the exception of the late starter.  ‘Aussie Falcon’ Dale Collings and Wayne Fallows (MSC/DBYC) was the only retirement for the race, with a broken stay.  The results for Race 1 saw ‘Where the Bloody Hell Are You’ skippered by Craig Rainey and crewed by Ian Rainey (GLYC) finish first.  She came in ahead of ‘Ineffable’ Nick and Enfys Jerwood, (SoPYC) by 12 seconds and finishing third was ‘Tuffan Up’ David Yu and Chris Nelson, (RFBYC), 15 seconds behind the winner.

Race 2 started in slightly stronger breeze and increasing chop.  The same course was set as for race 1.  The start was good except for two boats over the line, “Fflashpoint” Peter Rooke, (SoPYC) and “She Who Must Be Obeyed” John Hassen, (SoPYC).

As the wind strength and wave height increased, the fleet started to spread out and the racing was not as close as the first race.  The first three boats to finish were ‘Ark’ David Tabb and Dave Bennett, ‘Ineffable’ Nick and Enfys Jerwood, (SOPYC) and Surprize by Giveraus skippered Stephen Fries, (SYC).  Just missing a podium finish by 3 seconds was ‘The Flying Flamingo’ Lewis Davies and John Radnell (DBYC).

Nick Jerwood and crew Enfys Jerwood currently lead the regatta. Nick has won two Australian Championships and two World Championships (and is the current world runner-up).  The regatta runs from 31st December to 5th January and race results can be found here …