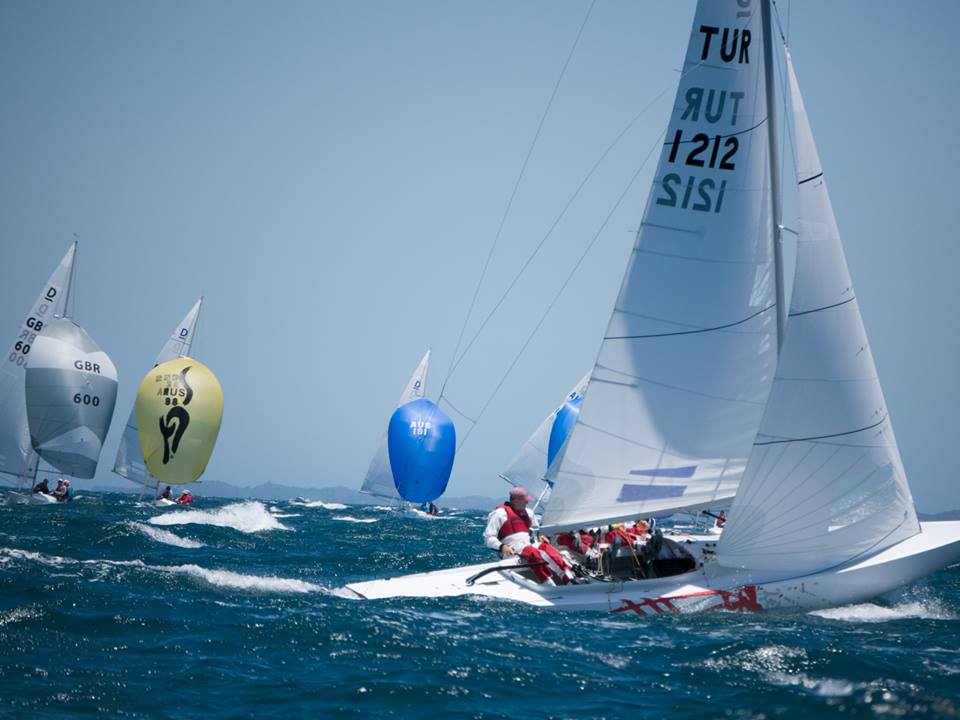 For the third day in a row Western Australia delivered the finest sailing conditions money can’t buy. Bright blue skies, good solid breezes and some great surfing waves. Although racing was brought forward again to an earlier start time of midday, this time the infamous ‘Fremantle Doctor’ teased competitors with a glimpse of the strong sea breezes that can blow at this time of year.

Two more races brought the total to six with one more day and two more races to go so the regatta is reaching the business end of proceedings. Despite being the first competitor to check in with the start boat, local Royal Freshwater Bay YC competitor Simon Prosser and his crew onboard Linnea suffered a breakage and had to return ashore to effect repairs. Simon had been sailing a great regatta sitting in 7th overall before day 3. As the only race drop comes into effect after five races were sailed, this DNC would be Simon’s discard.

Race 5 of the series got going in a building SW breeze gusting between 16 – 18 knots and a building seaway. Two local boats carried each other OCS, both returning but effectively placing themselves out of contention after returning. The remainder of the fleet punched upwind arriving at the top mark after around 28 minutes of sailing.

The ever familiar sight of the bright white spinnaker of current world champions Provezza representing Turkey, turned in the lead followed by Willy Packer and his team Julian Harding and Willy’s son Jock. Third to round was Provezza’s training partners, Yanmar Racing with Peter Gilmour at the helm and his son Sam up front with Yasuhiro Yaji in the middle. Fourth to round were the Dutch sisters Charlotte and Juliette ten Wolde, sailing with Pedro Andrade and Janka Holan with their spinnaker colours in the red, white and blue of the Dutch national flag. They are easily recognisable with their 2019 Dragon Worlds issue bright orange caps completing the Dutch theme.

The 30 boat fleet were well split with big separation from one side of the course to the other. At the gates Provezza opened up a few boat lengths over the rest but Willy Packer, Peter Gilmour and Charlotte ten Wolde all arrived turning in unison. These four boats opened up a bit of space over the next batch. As the breeze edged up a notch the first retirements started to limp past the committee boat to shore.

This time Andy Beadsworth’s world class crew of Ali Tezdiker and Simon ‘stir’ Fry decided to cover the fleet atoning for his error the day before when he gave away a couple of places. Despite a good effort, local ace Willy Packer could not reel in the Provezza crew, settling for yet another 2nd place. Peter Gimour and the Yanmar Racing team finished a consistent 3rd and Grant Gordon and his Louise Racing team a continually familiar face in 4th. RUS27, Annapurna slotted in a solid 5th and the Dutch Olinghi team a very credible 7th.

By the time race two of the day and race 6 of the series got going the ‘Fremantle Doctor’ was out doing his early rounds and the seabreeze was a solid 20 knots with gusts around 22 – 23 knots. Race 6 started at 1355hrs using the  preferred standard windward/leeward race track about a couple of miles off the Fremantle foreshore.

The fleet were well spread across the starting line with no breaks. The usual pattern of punching out on starboard tack to the slightly flatter water before laying over onto port tack for the long treck out to sea again seemed to carry favour with the bulk of the fleet. No change in the rounding order either, it seemed like ‘Groundhog Day’ with Provezza rounding in front of the Scoundrels but this time it was Anatoly Loginov and his Russian team of Vadim Statsenko and Alexander Shalagin who followed in third.

Downwind and the retirements started to be called in over the radio, Perth sailor Steven Locke limped home with a broken tiller, another local sailor John Anderson nursed his boat home with a broken stay. The Dutch women sadly pulled off the course and RFBYC’s Ray and Karen Chatfield with Peter Massee in the middle, suffered a collision causing a number of breakages and a long sail home under bare poles.

Meanwhile the Turkish Provezza team were turning on the afterburners to open up a lead of some 40 seconds over Willy Packers Scoundrels. The battle for third was a bit closer with Grant Gordon’s Louise Racing trading places with Anatoly Loginov’s Annapurna and Peter Gilmour’s Japanese flagged YRed.

On the last lap Provezza really did do a bit of a horizon job on the fleet surfing away to their second win of the day and their 4th win of the championship. Willy Packer finished a fast second but disaster struck shortly after the finish line when a loud crack was heard from the base of his mast. The Scoundrels had sailed so well in the regatta to date but would have to spend the layday re-rigging and tuning a new mast.

Third to cross the line in a big surge of Dragons was Louise Racing steered by Grand Gordon from Scotland, almost overlapped by the Gilmour clan in Yanmar Racing, themselves only half a boat length ahead of Fever sailed by Klaus Diederichs, Jamie Lea and Diego Negri representing GBR.

An exhausted fleet of Dragons surfed home to shore with the knowledge that they have a well earned lay day to rejuvenate, repair and rebuild themselves ready for the last day of racing on Wednesday 2nd January.

After 6 races of the 8 race series, Provezza Racing lead with 7 points, only 2 ahead of Scoundrel. These two boats have a bit of breathing space over Annapurna on 18 points and Yanmar Racing on 20 points. Even with the only discard coming in to play most of the fleet have at least one bad result or DNF to protect on the last day of racing.

The final day of racing is scheduled with a 1200 noon start time.

Today we did seem to find another gear but most importantly we didn’t mess it up, the two third’s we have had this week were when we were leading the races and managed to mess them up so it was nice today to execute the plan.

I think we have got some good pace, we got good starts, we didn’t make too many mistakes, we did have a man overboard in the first race of the day but thankfully he didn’t let go!

The boat is going very well, we like it, we have put some effort into this boat, it’s a new boat, we have only sailed it 3 or 4 times before we came out here plus a bit of training. Nothing seems to be breaking so it’s going well.

We are fortunate to have had some nice sailing out here, we came to practice about 3 weeks ago with Provezza and this is payback for that. We are still learning in our first year of sailing the Dragon. I am very happy with the results so far.

We like strong winds, Peter Gilmour likes strong winds he is sailing in his home town. The Dragon class are very confident sailors but we are still learning some tricks of the trade.