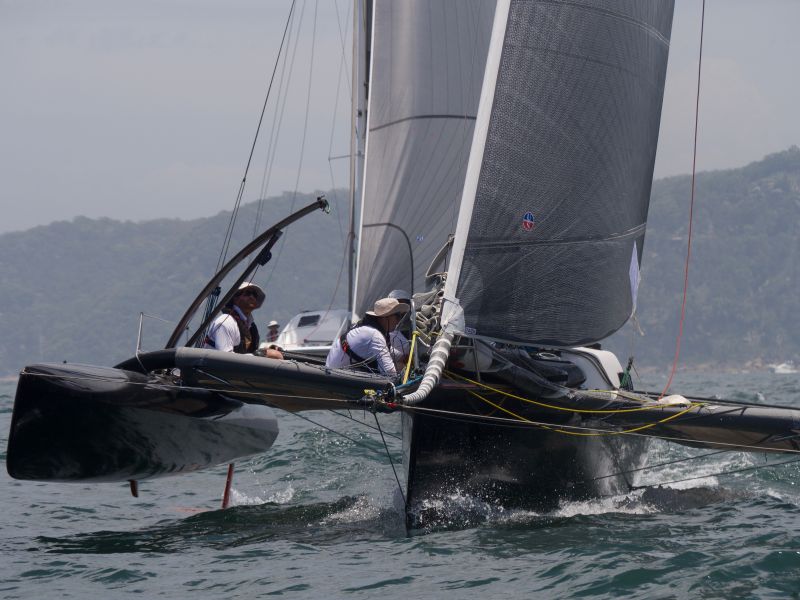 With a spectator fleet of in excess of 60 boats, the 2019 Pittwater to Paradise Regatta got away in a light NNE Breeze from 100-120 at approximately 7 knots.

The official weather briefing presented by a representative from the Bureau of meteorology anticipated NNE Breeze of 15-25 knots over the next 24-48hrs.

In the monohull fleet, Richards Hudson’s Farr 45 Pretty Women made it clear they had a plan to start at the pin which they had to fight for with Marcus Grimes and his crew onboard Insomnia, the Judel & Vorlijk 42.

With the multihulls starting 5 minutes behind the monohulls, it didn’t take Shaun Carroll’s Lombard Tri Morticia more than a few minutes to establish its dominance. Soon after passing Pretty Woman (monohull leader), Morticia was the first boat to get on to port tack and head east, chasing more favourable winds.

“After a clean start for both fleets the competitors have already encountered their first transition of the race with a S SE’erly starting to settle into the North, I am sure the navigators are already being heavily utilised,” commented Race Director, Nick Elliott.

Both events have been combined to create an offshore series for competitors and the ultimate winner of the Pittwater to Paradise Regatta.