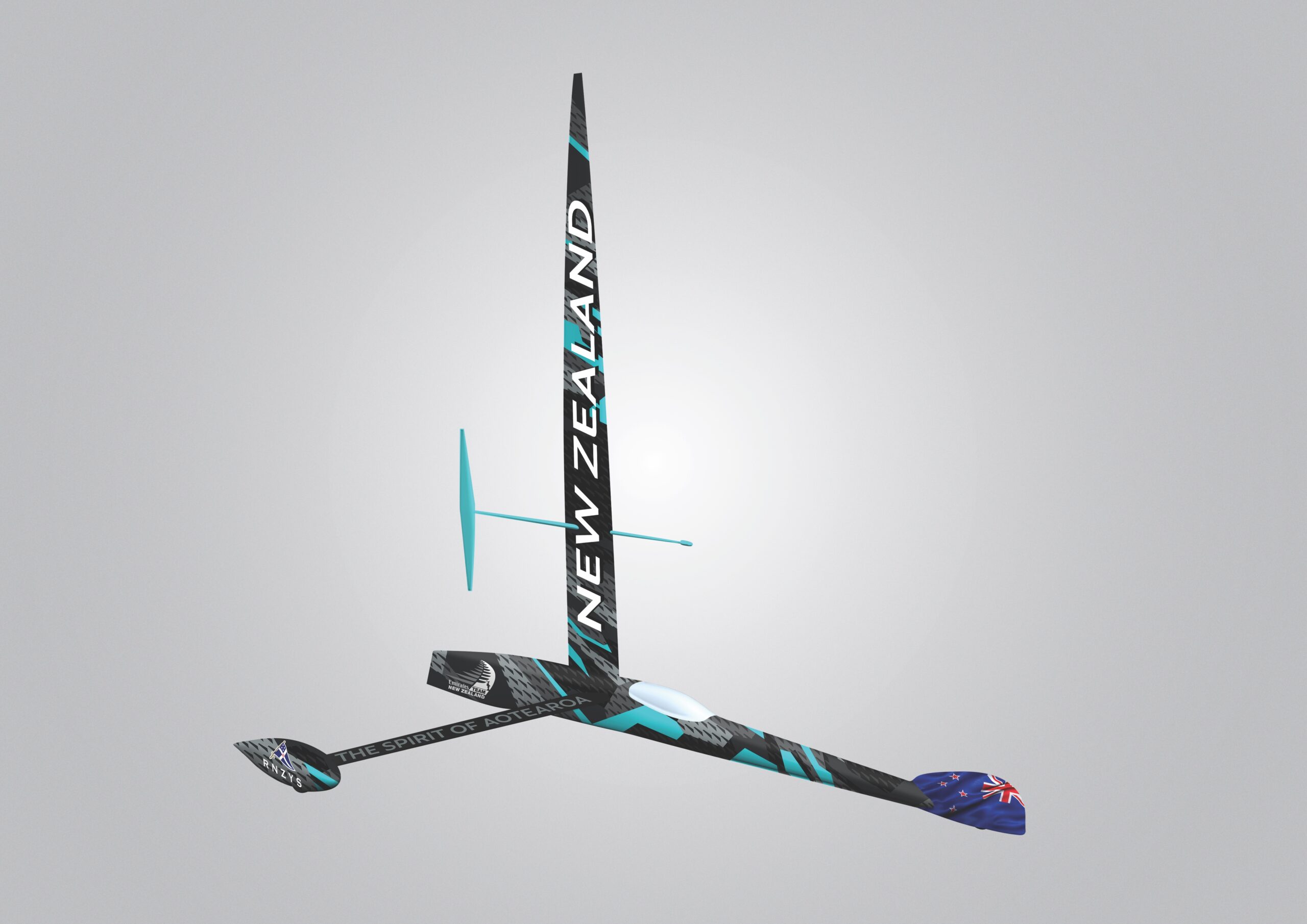 For a 10-year-old boy growing up in Bendigo Australia, his childhood dream was to go faster than anyone else had done, powered by the wind.

Speed has always been at the centre of Glenn Ashby’s existence, on yachts, motorbikes- or land yachts. The quest for speed has won him three America’s Cups, an Olympic Silver Medal and 17 World Championships in 4 different classes of boat.

All the while, he has utilised the window of opportunity that existed with the usual lull in AC activities during the transition from the 36th to the 37th America’s Cup.

ETNZ has always commissioned external contracts to keep the design team sharp and engaged during these periods. So, when the independently funded project to attempt to beat the Wind Powered Land Speed World Record emerged, it was not hard to find willing designers, engineers and shore crew to put their talents to the test from being fastest on the water of the AC to being fastest on land ever.

The speed record attempt has been a common point of discussion for a number of years between Ashby and ETNZ CEO Grant Dalton, who himself has had a long-held interest in such a record shot.

“The wind powered land speed record is something I have always been interested in, so when bringing a design challenge like this into ETNZ, I knew it would be beneficial on a number of fronts to keep the technicians and the innovators of the organisation engaged during a down time with new, complex technical issues to solve with a cool project.” said Dalton

Ashby has been like a cat on a hot tin roof on the end of dozens of Zoom calls back to the Emirates Team New Zealand base unable to re-enter New Zealand for the past 10 months.

“I have never spent so much time on the computer as I have this past year,” Ashby explained.

“Basically, from the point that Dalts said ‘let’s look at it’, after the finish of AC36, we have been all go. First job was a two-week in-depth feasibility study to ensure enough of a global understanding that this was something that could be done in a positive way for ETNZ and would not impact the team and its America’s Cup objectives financially or resource wise.”

Since then, Guillaume Verdier, Romaric Neyhousser, Benjamin Muyul, Jeremy Palmer, Romain Gard, Tim Meldrum, Sean Regan, Adrian Robb, Jarrod Hammond and Dave French have been working through the new design and engineering challenges entirely focused towards beating the existing record of 202.9km/h (126.1m/h) which was set in 2009 by Richard Jenkins in Greenbird.

Ashby paid tribute to Jenkins whose record he is trying to conquer. “In doing our research and digging deeper and deeper into the intricacies of the design challenges, it became very apparent that Richard really did an incredible job with his world record design,” he said.

“As a team, we explored some pretty creative and innovative conceptual ideas in the quest for more speed however, in the end our design and performance principles evolved into a concept reasonably similar in basic layout to the existing record holder, which really emphasised to us what a huge challenge this will be.”

Without a silver bullet in terms of a revolutionary design, and very much like what is predicted in the 37th America’s Cup with the next generation of AC75’s, the gains will come down to the small improvements and refinements that add up to overall advancements and success.

“Like the America’s Cup we just need to be doing it better across the board by utilising our experience, skills and tools gained as a team to date,” Ashby explained.

“And like sailing, there are always the weather gods, so we are doing everything we can to be ready when the right conditions are presented at the location.”

Emirates Team New Zealand Principal, Matteo de Nora, who is a significant supporter of the world record attempt, is clear on why now is the right time for the challenge.

“We are seeing some very close collaborations now, where the design is crossing into Formula 1 territory, with Ineos Britannia and Mercedes and Alinghi and Red Bull Racing for a start.

“This isn’t a coincidence and is focused on the top line speeds and lessons that can be learned the faster you can go. So, this project will be beneficial in continuing to evolve and learn so much more in the aerodynamic realm which was a significant factor in AC36.” said de Nora.

From a design and engineering perspective, Guillaume Verdier explained, “This project is a really compelling one for all of us involved. There are a lot of similarities to what we do with fast sail boats in terms of the aerodynamics and structural forces, construction methods, materials etc, so we are well placed in many respects.

“Without doubt, though, no boat we ever design will go anywhere near as fast as we need our land yacht to go. So, with the increase in speed comes increased complexities, but we are sure these are complexities that we can learn from so we can make our next AC75 go faster.”

The obvious element of uncertainty and point of difference for all the Emirates Team New Zealand designers is tyre technology and the dynamic forces associated with tyres on the ground, as opposed to hydrodynamic forces on foils in the water.

“This is the big unknown for us,” explained ETNZ Mechanical Engineer Tim Meldrum.

“Tyres on a flat salt surface going at over 200km/h is a whole lot different to foils in the water at over 50 knots.

“The rules stipulate we must run on a flat natural surface. The best ones we know of where it can be windy are dry salt lakes. With the tyres being the only point of contact to the salt it is a pretty important factor in finding the sweet spot in maintaining sufficient grip- with the least amount of rolling resistance.”

Our craft, when compared to a speed record motorised car, has a lot of differences. Firstly our ‘motor’ – a wing in our case – really delivers a small thrust force compared to a racing combustion engine. So, anything working against that thrust – wheel rolling resistance and aerodynamic drag has been a high priority to reduce if we want to hit high speeds.

“Secondly, our wing creates a lot of side load over the main back wheels, so we need to provide grip to keep it tracking straight.

“A downforce aerodynamic wing like those used in F1 to assist cornering grip would rob us of too much speed, so we opted to add variable ballast weight to allow us to tune our grip level.

“Extra weight mainly affects our acceleration time but does not compromise aerodynamic drag. The trade-off is we can go faster but we end up using more runway to get to our top speed. Luckily our racetrack is 8km across.”

Another contradictory problem to the norm in the America’s Cup is around weight. In the AC75’s, the less weight in the boat, the easier it will be to fly and faster it will be. With a land yacht, weight is a positive in certain respects.

Construction Manager, Sean Regan, explains: “In land speed, weight will be our friend if used in the right location. So, we can refine our construction techniques that account for additional weight in certain aspects and not be so focused on weight savings.

“On the outrigger pod we are actively adding weight or ballast to counter the wind force on the wing sail, without which, the craft would just tip over. Not something we want for Glenn approaching such high speeds.”

But like a scale measuring gold, the weight still needs to be precise. Too little the outboard tyre will come off the ground losing contact, too much it will add unnecessary resistance and lose valuable clicks of speed.

It is these sorts of design problems that will have to be overcome in the typically condensed lead up to a shot at the World Record in July, or early August, which Ashby and the team are working towards attempting on one of Australia’s vast salt lakes with Lake Gairdner in South Australia or Lake Lefroy in Western Australia as potential locations.

Any world record needs to be stringently verified and will require officials from the North America Land Speed Association to measure and record the run with a specific set of rules that must be adhered to in order to qualify for the World Record.

For now, the craft is already under construction at the Emirates Team New Zealand build facility on Auckland’s North Shore. “The build is scheduled for completion in late March, for assembly and commissioning and preliminary testing in Auckland subsequent to that.” Regan said.

“The plan is to then pack the craft and equipment into containers and ship it all to South Western Australian and truck to the record attempt location where a small team will be based from July onwards for testing and then ultimately a shot at the World Record speed run.

“Obviously the objective is to design a craft that becomes the fastest wind powered land yacht ever.” Ashby said.

“And no one would have ever been that fast in a wind powered craft on or off the water. So that’s a pretty bloody exciting thing to try to become.”