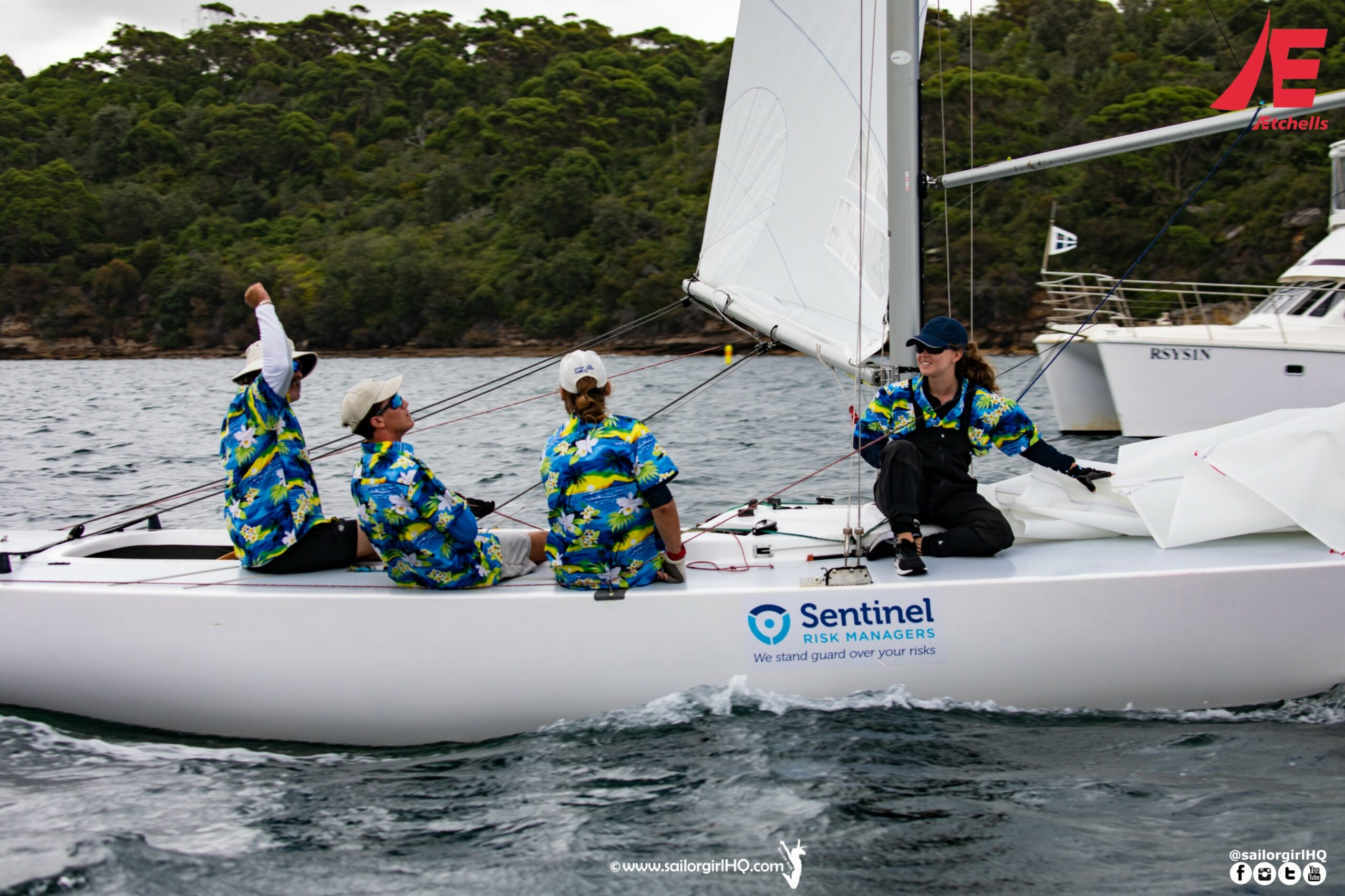 Day two of the Etchells NSW Championship was exceptionally variable and shifty on Sydney Harbour with breeze starting at 210 degrees, and moving at times all the way to 240, then later in the day right around to 90 degrees with no more than 8 knots of pressure apart from one passing raining cloud.

Despite the incredibly challenging conditions, the Royal Sydney Yacht Squadron Race Committee, headed by Race Officer Rob Ridley, managed to get in the full program of three races, taking the championship total to six.

Regardless of the ups and downs in pressure, First Tracks, skippered by Peter Merrington with Ian McKillop and David Gilmour on board, remains at the top of the leaderboard ahead of Dawn Raid, crewed by Matt Whitnall, Rob Bishop and Adrian Dunphy.

After a brilliant 10, 1, 2 in the tricky conditions, and claiming ‘boat of the day’, Yandoo XX, skippered by Nev Wittey, moved up to third overall. The Olympian, a big fan of training up young sailors, had three Royal Sydney Yacht Squadron youth squad members, Kyra Early, Zac West and Jameson Prescott on his crew.

Fourth overall is Doug McGain’s Ciao with his crew of Michael O’Brien and Mark Dagworthy. Fifth overall is Flirtation, skippered by Matt Crawford with brother Rob Crawford and Karl Bromfield, after they won the final race today.

Race 4 got underway with a start line set just off Steele Point at Vaucluse.

First around the top mark was Tango, skippered by Chris Hampton. He had a great start at the pin end of the line and continued to play that side right alongside Shark Island to stay out of the outgoing opposing current. There was quite a margin back to Corinthian entry Dawn Raid in second and Wobbegong 2, skippered by Roger Perrett with Paul Gudmunson and Grant Crowle.

The team on Tango held their lead around the bottom mark, however, were caught up the second work by Dawn Raid, which tacked onto starboard from port at the top mark. After a bit of shouting, Dawn Raid team did penalty turns, and finished third. Flying High 2, skippered by Jean-Claude Strong, with Seve Jarvin and Sam Newton was second.

Race 5 was set at 200 degrees and started in a similar position to the prior race off Steele Point. The best starters were Yandoo XX and Tango, so it was not surprising to see them first and second respectively at the top mark. Third was 2107 Racing, skippered by Dave Taylor, with Mark Griffith and Michael Hayward.

By the bottom mark, First Tracks continued to show her downwind prowess and moved into third. The first two continued to battle it out, but Wittey’s match racing history came to the fore. Even an incredibly shifty course, including a rain cloud, could not stop him and he was never headed.

At the final top mark, the finish was moved to an axis of 165 (so 345 degrees for the sailors’ downwind bearing) with the left hand shift that had filled in on the second work. The order of the top five around the marks did not change from the bottom mark and Yandoo XX went on to win the race.

2107 Racing moved up from third to second on the final run, again showing their downwind strength, which moved Tango back to third.

Race 6 was set at 140 degrees following the significant shift to the left in Race 5. The pin end was favoured at the start, in fact, Adam Magpie crossed the fleet in the early stages of the race. There were three individual recalls.

The fleet split early on the long approach to the top mark, which included Shark Island in the centre of the course, with Flirtation rounding just ahead of Yandoo XX.

The lead changed thrice between Yandoo XX and Flirtation on the downwind leg as conditions became more unstable.

Following the first two boats there was significant movement in the fleet, particularly for First Tracks and Viken, skippered by Colin Ryan with Marc Ryan and Marcus Burke rounding in third and fourth, having been 12th and 15th respectively at the top.

In order to ensure that all of the competitors finished inside the ninety minute time limit, the course was shortened to finish at the second top mark.

Flirtation held on to its lead to take the win narrowly over Yandoo XX.

“Well the kids are blown away [moving into third overall],” he said. “They are so happy and I’ve got to say, they’ve improved rapidly. They’re having a good time too.”

“They are learning,” said Wittey, who is also coach of the RSYS Youth Program. “I’m trying to make sure they do every aspect of everything that we all do at events. And I’m pleased, as they’re rising to the challenges.

“I think there is still a bit of Star Wars going on out there. They are sometimes not quite sure what is going on. But I am really pleased with them.

“Two of my crew are on P Plates, none has raced Etchells before,” Wittey said of his youth team when asked about their ages.

“This would have to be the best thing going on in Australia right now, without a doubt. I mean look at the fleet, it’s fantastic, and my team are starting to learn that even though they are sailing a big heavy Etchells, rather than a Laser or whatever they’re used to, we still have to move our bodies and we have to do it now… They are active in trying to understand what they need to do on the boat.”

There is one day remaining tomorrow with a potential for two races (maximum eight) to be sailed at the Etchells NSW Championship supported by Sentinel Risk Managers, Sail Racing and North Sails.

Media partner, Hill PDA, is also supporting live coverage of the event, to follow, head to: http://Etchells Australia on Facebook