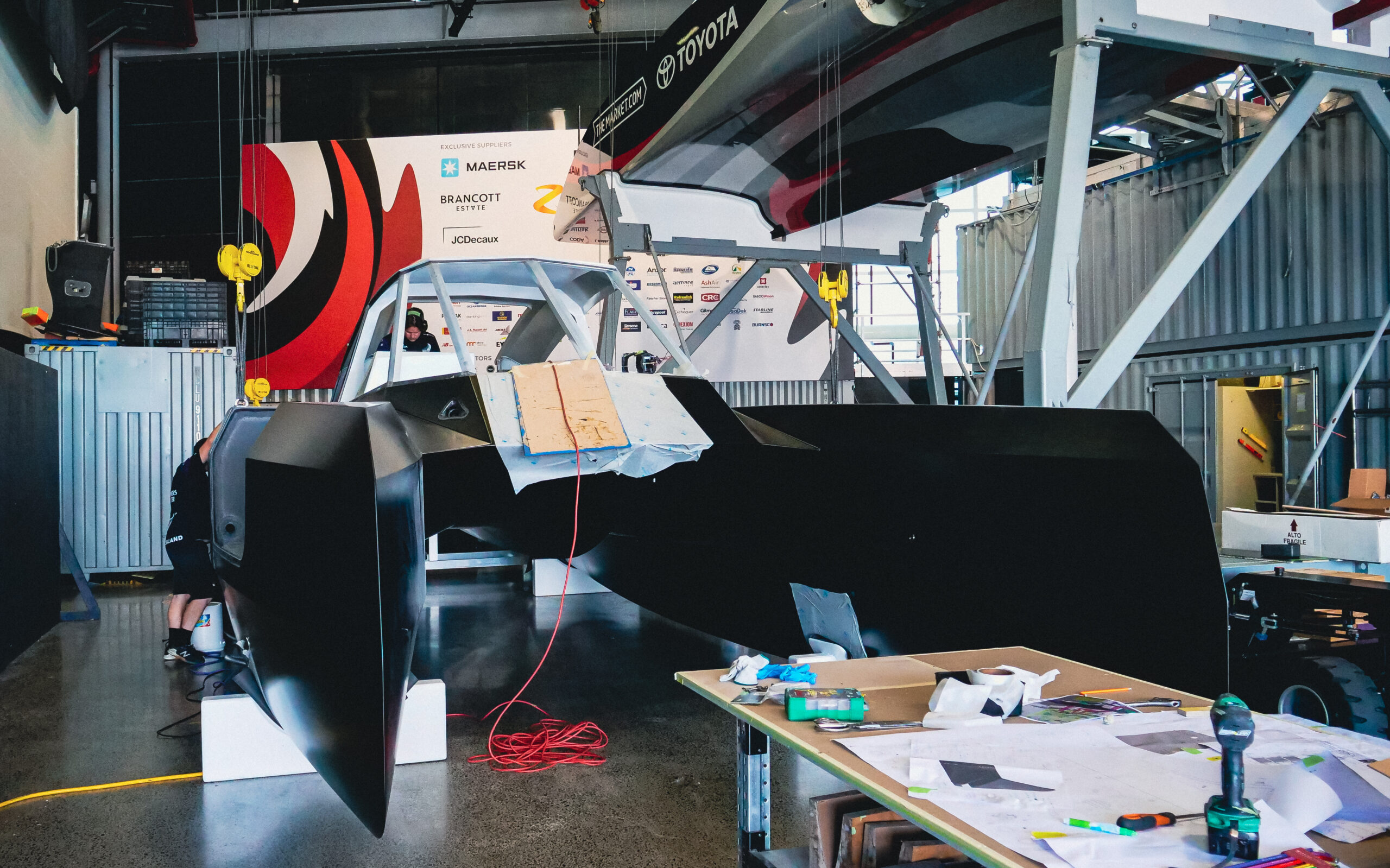 Emirates Team New Zealand’s prototype hydrogen foiling chase boat is in the final stages of a complex fit out prior to its launch in March.

The construction of the boat was started in August 2021 at the team’s North Shore build facility, the appendage construction is in its final stages and the Hydrogen Fuel Cell Powertrain installation is underway at the team’s base in Auckland’s Viaduct Harbour.

The ETNZ Hydrogen project powered by Toyota has been an important one for Emirates Team New Zealand who, as Defender of the America’s Cup, have committed to driving hydrogen innovation in the marine industry through working with clean technologies.

“The Hydrogen project has been a completely new challenge across the board for the designers, builders and engineers,” Head of Design, Dan Bernasconi said.

“These types of projects are extremely beneficial to keep the guys pushing the boundaries, continually learning and approaching problems with different perspectives, which all help to keep raising the bar in our design approach to the 37th America’s Cup, which is also progressing in parallel.”

The prototype foiling boat is 10 metres in length, and approximately 5200kg displacement, the cruising speed will be 30-35 knots with a top speed of around 50 knots and will carry 6 crew members with a range of between 150-180km generating approximately 440kW peak power via a 400V DC system powered by the Hydrogen Fuel Cell.

“A project like this is not a straightforward one, and we have had to pull together a wide range of suppliers and components for this prototype boat, parts of which look like something out of Back to the Future,” Project Manager, Geoff Senior explained.

“Toyota New Zealand and the Toyota Motor Corporation Japan have been a significant part of the project in supplying the 2 x 80kW pre-production Toyota Hydrogen Fuel Cells. Global Bus Ventures have supplied the Hydrogen Powertrain system design and integration and Gurit have been a valuable partner with the composite materials and engineering.”

The four hydrogen storage tanks on board from Hexagon Purus will store 33kgs of hydrogen gas at 350bar while the propulsion is via a Mercury bottom end propellor which is embedded within the foils. The design of the foil wings by the ETNZ design team was largely based on AC75 technology and the Autopilot which will be used to control the ride height is ETNZ proprietary technology that will be implemented in the new AC40 boats in production.

Michael Rasmussen, ETNZ Mechatronics Engineer said, “It is a learning curve for everyone involved, but it always is when we are driving technology into new territory. But with that comes really focused engagement from everyone involved to produce something we hope will reach the objectives we set out to achieve in driving a clean change in the global marine industry from down here in New Zealand.

“It will be an exciting yet stressful time once we are ready to get it out onto the water and put it to the test, which seems to be the way with every boat Emirates Team New Zealand creates.”

The prototype boat is expected to launch early next month and will be put through a thorough sea trial to work through all the complex systems involved to get the boat up and flying.

An integral supporter to project is ETNZ Sustainability Ambassador and former Chair of Directors, Sir Stephen Tindall, who along with helping to fund the project, also believes that strategically clean hydrogen will be a very important part of New Zealand’s green sustainability in future.

“Green hydrogen comes from renewable energy like wind, solar and hydro and once the hydrogen is used in the boat, the only by-product is water.” Tindall said.

“I believe our ambitious move into hydrogen boats by Emirates Team New Zealand will set the scene for motor driven craft as we did in starting the marine foiling revolution. I am looking forward to seeing millions of hydrogen driven vehicles and boats over the next 20 years.”