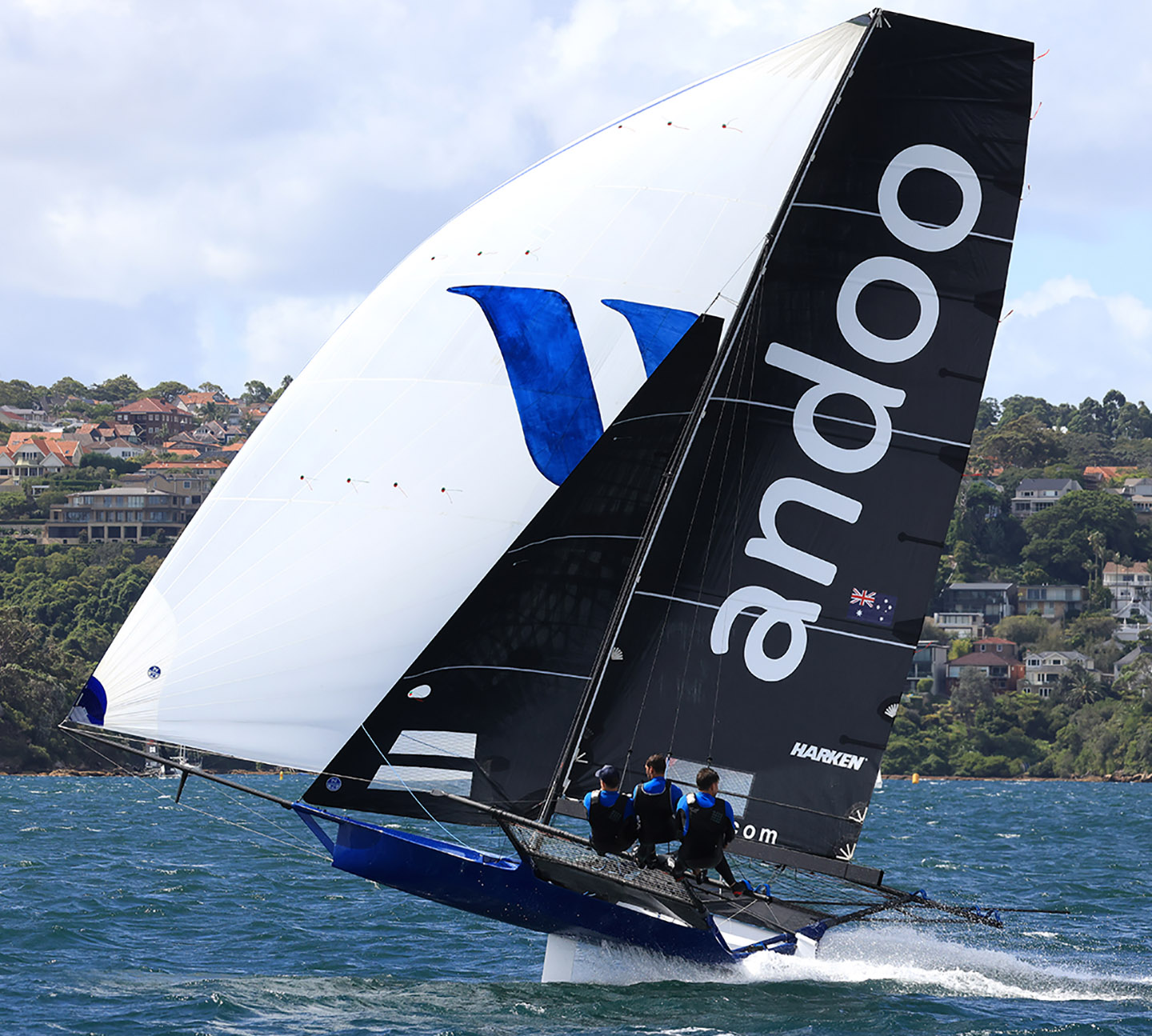 The Andoo team of Seve Jarvin, Matt Stenta and Sam Newton gave an outstanding display in the 12-23 knot south/south-easterly breeze to score a convincing victory in Race 1 of the 100th Australian 18ft Skiff Championship on Sydney Harbour on Saturday.

Andoo grabbed the lead at the first windward mark and, but for a brief capsize late on the next spinnaker run, led all the way to defeat the Smeg team of Michael Coxon, Ricky Bridge and Zac Barnabas by 48s.

The defending champion Tech2 team of Jack Macartney, Charlie Wyatt and Lewis Brake was well back in the fleet after a disappointing first leg and hard to battle hard to come back and finish a further 39s behind Smeg, in third place.

Jarvin’s decision to go to the eastern side of Shark Island after the start proved to be decisive as Andoo took the lead from Shaw and Partners Financial Services (Steve Thomas) and Finport Finance at the Rose Bay mark.

Smeg’s team elected to go to the western side and were back in fourth place, ahead of Rag & Famish Hotel, Lazarus Capital Partners (Marcus Ashley-Jones), Queensland’s C-Tech (Dave Hayter) and Birkenhead Point Marina (Tim Westwood).

When Andoo had her costly ‘swim’ as the crew dropped the spinnaker, Smeg took full advantage to take a narrow lead from Finport Finance and Shaw and Partners at the bottom mark. Andoo was back in fourth place, 19s behind the leader.

Andoo and Smeg were both showing the form expected from such talented crews and only 10s separated the pair following the next windward leg across to Clark Island where Andoo had recaptured the lead, by just 10s from Smeg and Shaw and Partners, which was just a few boat lengths back.

The two-sail reach from Clark Island to Chowder Bay saw little change in the positions at the head of the fleet but a costly error at the rounding mark saw Shaw and Partners lose at least two or three placings to trail Rag & Famish Hotel and Tech2 as the fleet set off for the work into Rose Bay.

Smeg made a small gain at Rose Bay while the Shaw and Partners team had recovered from the problem at Chowder Bay to be back in third place just ahead of The Rag, Finport Finance and Tech2.

On the loop across the harbour from Rose Bay to Taylors Bay and back, the Andoo team were unstoppable and doubled the lead to 45s as spinnakers were set for the final spinnaker run down to the final rounding mark off Robertsons Point.

The race provided exciting, high speed spinnaker action and has set the scene for what promises to be a closely-fought championship.

With two races to be sailed on Sydney Harbour tomorrow and two more on Monday, in conditions predicted to be not unlike those of today, the teams will have to battle both the elements and the stamina needed to keep their skiffs in the battle for victory.

Spectators can follow the racing on board the club’s spectator ferry on Sundays February 6 and 13, however due to the COVID-19 policy, numbers are limited. Booking online through the club’s website is essential at: http://www.18footers.com.au/18-footers-sailing/spectator-ferry/

There is NO spectator ferry on Monday, February 7

For those unable to make it out onto the water, the club’s Sail Media live-as-it-happens broadcast team will be on Sydney Harbour each day to capture all the action. Live streaming is available at: www.18footers.com by clicking on the ’18 Footers TV’ link.