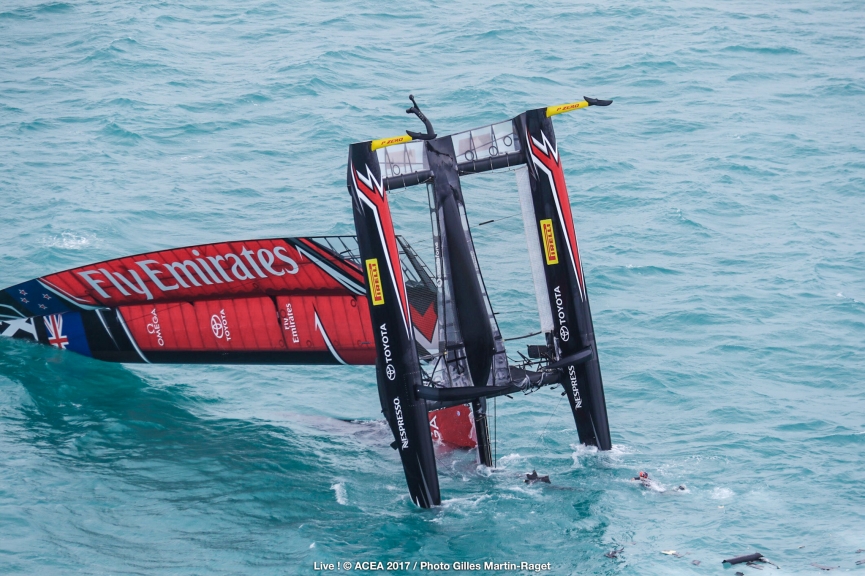 The French challenger informed a journalist from the New Zealand Herald that the answers to his questions would be provided at the beginning of the present week (Monday, July 10th or Tuesday, July 11st.). Despite our reply, an article was published without giving us the occasion of sharing our part of the story.

– Team New-Zealand capsized in Bermuda on June 6th during the semifinals opposing them to the candidate in contention.

–  Following that event, the French challenger, who was by that time eliminated, has been contacted to help Team New-Zealand.

Our answer to Team New Zealand was as follows:

The official request was made by Kevin Shoebridge not Grant Dalton, as stated in the article, our answer was negative.

1)   We were still sailing after being eliminated to pursue our training and fulfill sponsoring opportunities for the 36th America’s cup. Therefore, having no spare parts on site, this would have compromised our plans.

2)   By agreement with our sponsor, who owns our material and our boat, we did not want to favor Team New Zealand over Land Rover BAR in the semifinals. Team New Zealand expressed their opposition to the other team’s vision for a certain stability towards AC36. Team France being 100% commercially funded and  without private investors, this strategy was vital in order to protect the potential future of the team.

For your information Team France never requested any financial compensation.

Finally, regarding the allegations of interference from defender Oracle Team USA, we wish to clarify that it is of course false and unfounded. We are disappointed that such information has been released without checking with the concerned teams first.

Our team continues to work on the future and is looking forward to reading the 36th Americas Cup Protocol.