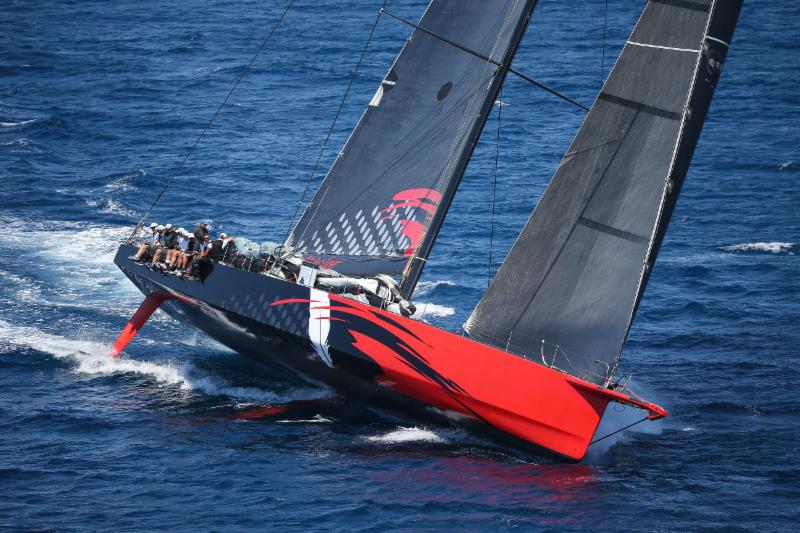 Comanche was off to a fast start on Thursday and is closing in now on the race record - photo Sharon Green/Ultimate Sailing.

HONOLULU, HI – One week after the first wave of starters and four days after the last wave, the bulk of the 55 entries in this year's 49th edition of the Transpac are at about their halfway points to the finish at Diamond Head in Honolulu. On the 2225-mile course less than a dozen are still to reach the half-way points in their projected tracks in the race.

Unlike the last two editions of this classic biennial ocean race, the weather has been favorable for a “normal” passage to Hawaii, with the boats heading southwest after passing the West End of Catalina Island, then arching towards the west and now north of west as they get into the easterly tradewinds near the southern latitudes of the Hawaiian archipelago. The fleet's southerly arch away from the rhumb line has been intentional to stay away from the light winds in the Pacific High, but in the next few days some may extend west rather then south to cut down the distance if they're confident there is enough wind pressure to justify this move.

The conditions of relatively steady 10-20 knot winds with few holes has been perfect for the fleet leaders, who have been speeding along at over 20 knots of boat speed and are quickly consuming the remaining miles left to Diamond Head. At 0900 Hawaii Time today the three leading multihulls – H.L. Enloe's ORMA 60 Mighty Merloe, Lloyd Thornburg's MOD 70 Phaedo and Giovanni Soldini's MOD 70 Maserati – have been locked in battle, with Merloe in the lead ahead of Phaedo by 57 miles with only 168 miles to go on their final approach to Oahu.

At current speeds, Merloe's finish time tonight will not only break the multihull race record set in 1997 by Bruno Peyron's Commodore Explorer of 5 days 9 hours 18 min and 26 sec, but possibly smash it by more than a day. The other two MOD 70's also likely to beat the previous mark by coming in only a few hours later.

This report came from Will Suto on board Might Merloe just hours before she was within sight of the islands, and probably the last report before she finishes tonight:

“I can't stop thinking about how lucky we are to be out here doing what we're doing. The ocean and sky are beautiful. Last night the sun set on our bow and the moon rose on our stern. The colors at dusk out here are unlike any other place I've been.

“We're still dealing with marine debris. Today I had to crawl out onto the sterns of both the starboard and port amas and dangle off the very back to clear chunks of polypropylene fishing net from in between the top of the rudders and the hull. We had to keep going at full speed to keep the hull out of the water. If we had touched down the force of the water would have dragged me off. I was tied to the boat three different ways, but it was still a nice moment of clarity.

“Another highlight of the day was being able to strip out of my drysuit for a brief period. All onboard are doing well. It is a truly fine crew that Enloe has assembled this time. Fast, calm, and all with the good humor requisite to live stacked like sardines inside a carbon fiber tube. On that note, it is a good thing this boat is so fast, because the interior is getting a bit fetid. The racing out here is fierce. Keep an eye on the Yellowbrick tracker. The finish will be a nail biter.”

On a conference call held today with the media, Comanche skipper Ken Read had some interesting Q & A with the group:

– What if any effect has floating debris had for you on this race? No affect so far for us. A few close calls. Sad but true that modern sailing has to deal with floating debris more and more these days. in a way is a game of Russian roulette offshore especially with these modern boats that go so fast you don't have time to avoid and the multiple appendages that increase the chances of damage.

– Was the decision to leave the boards a good one, i.e., has this been positive for performance in this race? Our mode for the boat has been unreal this race. We really set up light with no boards and mimimum sails and crew. A rough guess is about 5 percent faster than our normal polars. Certainly hoped for but not expected to be this good. We would have used the board for about 3 hours effectively for the race so that became a no brainer for us and a huge weight and windage gain. We only have one downwind sail for example. Shows the amazing range of the sails and durability which we turned into a huge weight savings by not bringing redundancy with the downwind sails.

– With only 15 guys, how easy is it to gybe, i.e., how long does it take compared to when full-crewed? No different. We can fill all the handles which is why we didn't go more on crew reduction. Just takes waking everyone up a bit more often but certainly worth the hassle and a couple of nasty waking stares from time to time. The time difference is the stacking of the sails which takes about 20 minutes from start to finish but hugely worth the effort

– What has your peak speed been on this trip? 30 knots.

Some teams have not had such fast, relatively trouble-free sailing, including Manouch Moshayedi's Bakewell-White 100 Rio100: yesterday they reported breaking their port rudder and having to slow down to affect repairs, but now they are going again, albeit at a reduced speed because they need to sail the boat flat on starboard tack to keep the starboard rudder immersed. A danger for Rio 100 is being able to stay ahead of some smaller fixed-keel boats that may now be able to catch them and take the Barn Door Trophy, such as Frank Slootman's Pac 52 Invisible Hand, who is now showing to be almost 2 knots faster on average.

Similarly, Scott Grealish's Farr 400 BlueFlash has had to be careful not to break a jury-rigged steering cable they fashioned from a piece of Dyneema to replace the primary one that broke. They are proceeding to Hawaii at less-than optimal speed due to this problem.

Other stories and videos coming from the boats range from the profound to the mundane, with some boats being prolific in sending a new story each day while others have submitted only one. Common story themes include on board mechanical issues that need solving, how many were seasick on board the first few nights of rough seas, the incredible clear moonlit nights, how life is better and drier on board now that the hard reaching is turning to running and the boats are not heeled as much, the types and varieties of sea life spotted, flotsam missed, etc.