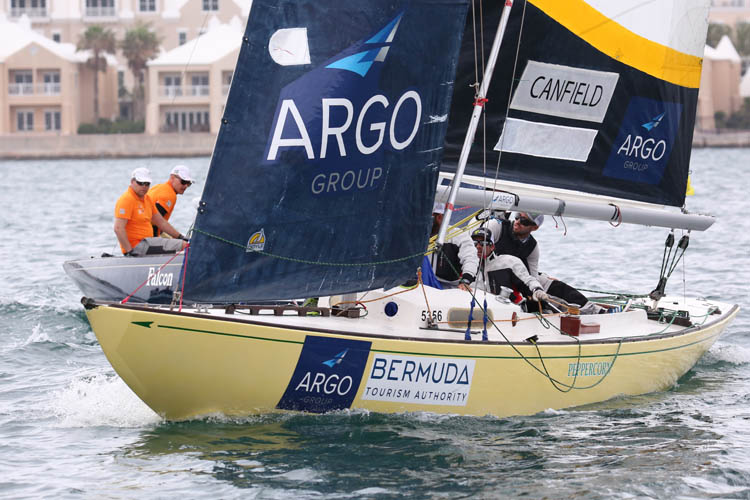 Canfield succeeded in an exciting match that belies the lopsided scoreline. The final four races featured lead changes, penalties and luffing matches, the hallmarks of good, close match racing. In this case, Canfield and crew happened to come out on top versus a very experienced team.

“We made huge gains through the week,” said the 29-year-old Canfield of Miami, Fla. “The IOD is a tricky boat to sail and we had very tricky conditions this week. But the more time we spent in the boat the better we got. Full credit to Johnie and his team. They’re very experienced and have also won this trophy twice. We always have great matches against them.”

Berntsson’s job as the CIO of a hospital in Stennungsund, Sweden, has prevented him from match racing full time the past few years, but his accumulated experience in the IOD and on Hamilton Harbour helped him get to the final where he and his crew ran into a ruthless opponent.

“We’re a bit disappointed,” said the usually affable 47-year-old Berntsson in a moment of reflection. “Had a few decisions we made gone the other way we could’ve done a bit better. But Taylor and his team sailed very well. If you give them a slight chance they take it. We have full respect for them and congratulate them. It was a really good week of sailing.”

In the Petit Final, Australian Torvar Mirsky defeated Lucy Macgregor from the U.K. by the score of 2-0.

Mirsky led the match 1-0 lead after Friday’s racing and then made quick work of today’s race when Macgregor started on the course side. By the time she cleared the line and started properly in the light winds under 5 knots, Mirsky was nearly halfway up the windward leg.

Mirsky led by nearly 90 seconds at the first windward mark rounding and when the breeze increased to nearly 8 knots shortly after his rounding, he was on his way to third place overall.

Macgregor posted the best finish ever by a female crew in the Gold Cup and won the Wedgwood Heritage Trophy, awarded to the sailor who best represents the traditional values and history of sailing.

Italian Ettore Botticini, competing in his first Argo Group Gold Cup at the age of 22, won the Jordy Walker Memorial Trophy for the most improved crew in the regatta.

The first three races of the final were sailed Friday afternoon and Canfield moved to match point at 2-1. Today’s lone race was sailed in a west/north-westerly breeze between 5 and 10 knots, far different from the shifty and puffy southerly of the first four days.

Berntsson got the jump off the start line, taking better speed onto the racecourse and sailing over the top of Canfield. Halfway up the beat Berntsson led by about eight boat lengths when both crews tacked to port. Berntsson tacked before Canfield, who extended slightly farther.

Berntsson probably tacked too soon because he was shy of layline. That forced him to do two extra tacks to make the windward mark while Canfield was able to lay the mark. Berntsson led by approximately three boat lengths but was still suffering from the down speed tacks.

Canfield jibed to starboard shortly after rounding and Berntsson matched even though he was still down speed. Once both were on starboard Canfield sailed over the top of Berntsson and then down across his bow.

“We didn’t have the best start but we kept pushing hard,” said Canfield. “We had a great layline to the first mark and we kept the pressure on him. If you have a good team and you keep the pressure on the guy in the lead you stand a good chance of passing him and that’s what we did.”

The Argo Group Gold Cup is sponsored by the Argo Group, an international underwriter of specialty insurance and reinsurance products in areas of the property and casualty market. Additional sponsors include the Bermuda Tourism Authority, Bacardi, Guy Carpenter, RenaissanceRe and Aon Benfield.