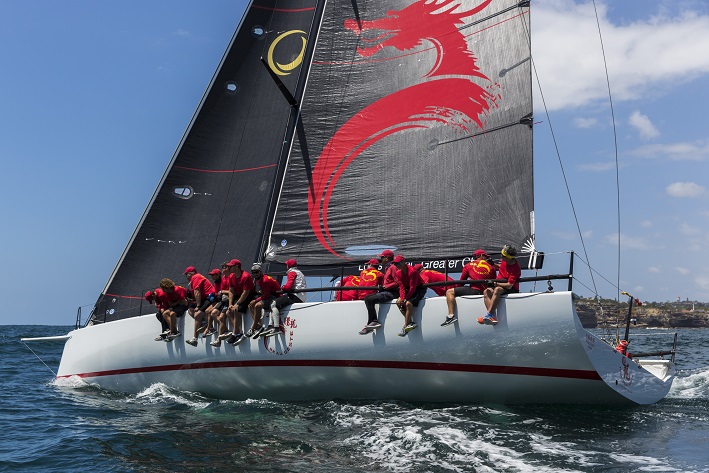 A tight-knit crew and a take no prisoners approach to every race and regatta they compete at, finds Karl Kwok’s Team Beau Geste in the winners seat yet again, this time on Day 1 of the CYCA Trophy Passage Series.

The crew of Team Beau Geste, Kwok’s TP52 representing Royal New Zealand Yacht Squadron, timed the start beautifully and there was no looking back. Her nearest rivals, Steven Proud’s Kernan 44 Swish and Syd Fischer’s TP52 Ragamuffin with grandson Brenton in the skipper’s role, were left behind to battle it out for the minor placings.

Division 2 provided much closer racing for that winner, Larki Missiris’ Sydney 38,Wld1, whose crew struggled with an awful seaway to keep up with their larger opponents.

Missiris recalls, “It was a big seaway – it was terrible offshore. It was hard to hold on to our bigger competition – Chutzpah (Bruce Taylor’s Caprice 40 from Victoria) and especially Nine Dragons (the DK46 owned by Bob Cox).”

However, Missiris admits, “It was a great day out. We had a fantastic start – around 10 knots, but it filled in as we raced. We got up to around 15 knots as we sailed to the mark and 19 on the return to the finish in Watsons Bay.

“We knew we couldn’t lose time on Nine Dragons and fortunately we kept up. The crew worked well – there were no mistakes,” ended Missiris, whose boat topped the board with Nine Dragons second and Travis Read’s Jarkan 12.5, China Easyway, third.

Principal Race Officer Denis Thompson started the race on time at 11.00am in a light 8 knot east-nor-easterly breeze.

“We had one OCS – Hartbreaker,” Thompson said of Antony Walton and Alan Breidahl’s well named Reichel/Pugh 46 from Victoria.

Hartbreaker had its problems when owned by Geoff Boettcher and known as Secret Mens Business, including an altercation on the start line at Hamilton Island Race Week. Her name is a nod to that and the fact that she was built by Hart Marine in Victoria – and for the fact that Walton is a cardiologist. His own heart may have been working overtime at the start.

“The sea breeze started to fill in and moved more into the north-east shortly after the start and increased to 12 knots,” said Thompson who sent the fleet on Course 6, a 27 nautical mile race with a mark laid 12 miles offshore.

Racing in the annual CYCA Trophy Series, conducted under IRC, ORCi and PHS, finishes tomorrow, with another passage race.

Starting from 11.00am, Denis Thompson will select the course on the day, depending on conditions. Racing is due to start from Shark Island at 11am and finish at Watsons Bay. In the case of heavy weather, Thompson will set a Sydney Harbour course.