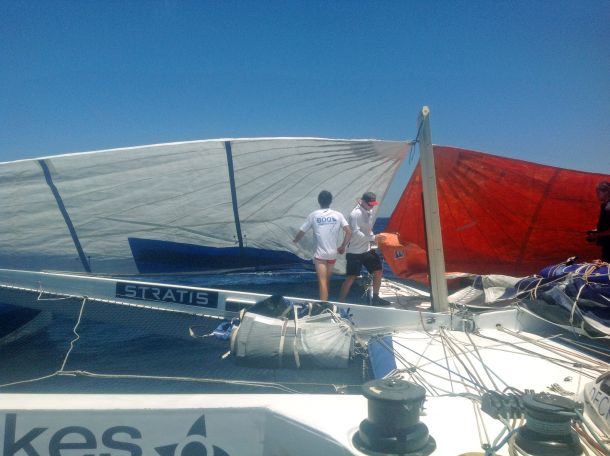 Rig down on Team Australia

In a sudden disappointing turn of events in the Club Marine Pittwater to Coffs Yacht Race, race leader and multihull record holder Team Australia’s 100-foot mast came down late this morning when the trimaran was 10 miles out to sea south of Port Macquarie.

The crew of eight men on board the Sydney based 60-footer are all OK.

“It’s a shock given we had we weren’t doing anything unusual, we were just starting to get going properly,” said Langman via mobile phone at 1300hrs. “It’s disappointing and not over yet, we still have to get in. We are heading back south as it’s too difficult to motor straight up wind.

“The carbon fibre made a hell of a noise when it cracked. It ended up in three bits so it’s not really repairable. Jimmy [Spithill] was steering at the time, he was telling everyone to stay down below. It would have been a much worse situation if any of the guys were hurt. We are all good and now playing with jury rigs so we can get going.”

Team Australia’s crew spent a significant amount of time trying to retrieve the mast and sails and bring all the lines in before starting their engine however this proved too difficult. Instead they made the difficult decision to jettison the broken mast, marking its location with a Dan buoy, flashing light and flag and a spare Yellowbrick tracking device.

Team Australia is about to motor away under jury rig to Port Stephens where skipper Sean Langman has a boatyard at Nelson Bay. The race committee will continue to monitor the situation and keep track of Team Australia’s position until they are safe at port. Maritime authorities have been alerted should the crew require assistance to reach port safely.

The rest of the racing fleet heading north has been alerted to the large obstacle drifting on the surface potentially in their path via a sécurité radio message from Water Police Area Command.

Langman notified the organising authority the Royal Prince Alfred Yacht Club just before 1100hs they had been dismasted around 10 miles out to sea off Diamond Head, south of Port Macquarie. Winds at the time were 17 knots from the NE.

At this time there’s no known reason for the dismasting.

The crew of eight on board includes Sean’s son Peter and America’s Cup skipper James Spithill along with Spithill’s brother in law Grantley Pellew from Harken. The Langmans are not long back from this year’s Rolex Sydney Hobart where they competed on Sean’s other sailing love, his 83 year-old 30-foot Maluka of Kermandie, the smallest boat in the fleet.

It’s been a tough New Year coastal classic so far, light winds plaguing the fleet for the first 20 hours and just when Team Australia was finally up and moving its race abruptly ended.

Karl Kwok’s Botin 80 Beau Geste sailing for the Royal Hong Kong Yacht Club is the new leader, with 86 nautical miles to the finish and currently travelling at 11 knots of speed in nor ‘east winds.

Based on current speed their ETA at the finish is around 1900hrs this evening, Saturday January 3, 2015.