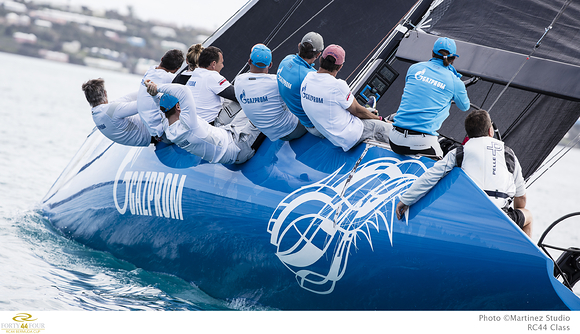 A last minute charge from Vladimir Liubomirov's Bronenosec Sailing Team was not enough to displace Chris Bake's Team Aqua from the top of the leaderboard at the conclusion of the RC44 Bermuda Cup, the first event of the Sir Russell Coutts-conceived one design's 10th anniversary season.

Conditions on the final day of competition on Bermuda's Great Sound looked marginal initially with a near glass out mid-morning. After a postponement ashore, the first warning signal was finally sounded at 1410 and PRO Peter Reggio just managed to lay on two races in a shifty, patchy breeze that rarely exceeded five knots.

A disappointing penultimate day of racing had seen Bronenosec drop off the leaderboard, but today in the difficult light conditions the Russian team's tactician, Michele Ivaldi, seemed to have a direct line to the wind gods. This somehow enabled the blue-hulled RC44 to win both of today's races.

“I've been asleep for a couple of days – today I woke up finally,” said Ivaldi with a grin. “For sure in this kind of conditions some luck is involved, but we had good starts and we managed both times to get the first shift. That together with good boat speed and good crew work – it wasn't easy, but it was a good effort.”

The secret was to be looking ahead constantly to 'join the dots' between the various puffs. “If you looked behind you, you would go crazy…” Ivaldi warned. “There were 40° shifts and big puffs everywhere. It was really hard – like Virgin Gorda again!” (Referring to the last event in the RC44's 2015 season).

Italian navigators are typically good at these conditions which Ivaldi compared not with those typical of Mediterranean Italy, but of an Italian lake.

Bronenosec's helmsman Vladimir Liubomirov was equally delighted with his team's performance today. “Before we were really scared because the wind conditions were really tricky, like a casino, but Michele did an extremely good job together with the trimmers. And we did it… For us it was very important to finish this first race of the year very well.”

Liubomirov added that he had been thoroughly taken with Bermuda as a sailing venue. “I like it a lot – we have to come back for sure.” The next RC44 visit is pencilled in for 2018.

John Bassadone's Peninsula Petroleum Sailing Team, which has another renowned Italian tactician, Vasco Vascotto, also had a solid day, posting a 2-3. But it was less good for Artemis Racing and Francesco Bruni, despite one extraordinary opportunity that emerged on the first run of the second race when the boats at the back of the fleet were able to sail some 20-30 degrees lower than the boats ahead. This elevated Artemis Racing from seventh to second, but she subsequently lost this position on the next beat. “It was a real throw of the dice,” admitted Bruni.

Bronenosec Sailing Team's pair of bullets caused them to leap from fourth overall back on to the podium and then to second, finishing three points ahead of their arch-rival, Vladimir Prosikhin's Team Nika. But it was not enough to topple Chris Bake's Team Aqua. Team Aqua only had two results out of the top half of the fleet, in this lengthy 12 race series.

“We're really pleased with this week – the guys did really well,” said tactician Cameron Appleton. “We fought hard today in the first race for a start we really believed in. It didn't quite work out in our favour, but the team did a really good job of keeping the boat fast and we got back into the race enough to take fourth.”

Their prospects were looking better in race two when they pulled out an extraordinary lead on the first beat. However they were prepared for the second leg becoming a lottery. “I said to the guys 'at this point, if we don't win, then we're not supposed to, because who knows how this race is going to unfold.'”

Despite dropping back on run and for a stage on the second beat, they managed to recoup a second place and the victor's 'golden wheel's as winner of the RC44 Bermuda Cup.

The margin between the leaders has impressively remained tight throughout the four days of fleet racing at the RC44 Bermuda Cup. Going into the final race four boats mathematically could still have won.

The RC44s now leave the 35th America's Cup venue bound for the RC44 Sotogrande World Championship in May.