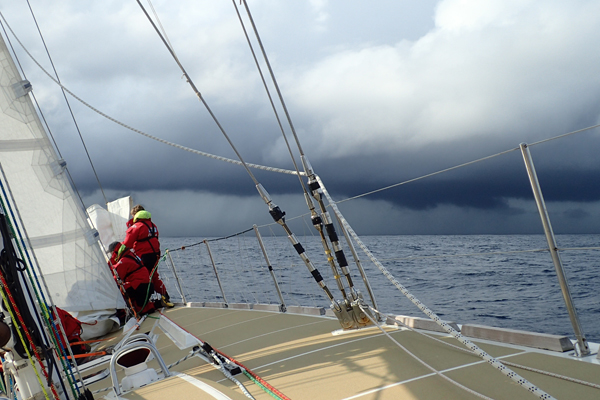 Wind holes, thick fog and enormous fishing fleets are making for very stressful racing for the teams as they make slow progress towards Qingdao on Day 9 of The Sailing City • Qingdao Cup to China.

Derry~Londonderry~Doire (first position) and Garmin (second) have been involved in a duel over the last few days, with both teams activating Stealth Mode yesterday to hide their tactics. Both teams were neck and neck as they approached the Scoring Gate, but Derry~Londonderry~Doire got ahead of Garmin to be first over the virtual waypoint by 1h 17m*.

The welcome extra three points for the Northern Irish entry comes on top of two points won on the Ocean Sprint yesterday.

Garmin will receive two Scoring Gate points for being second over, with third-placed LMAX Exchange looking likely to take one point.

Garmin Skipper Ash Skett noted in his blog today how sailing in such light winds (4-5 knots) is even more exhausting than sailing in heavy weather.

“It takes a lot of concentration and constant sail adjustments to try and squeeze each extra 0.01 of a knot of boat speed. Every tweak of a line or turn of the helm can make a difference,” he wrote.

Matt Mitchell, Skipper of ClipperTelemed+, in eleventh place,described the conditions over the last day and looks at the changing weather forecast ahead.

“Progress has been very up and down over the last 24 hours, one minute the wind would be up and we would be storming along, the next, it would die to nothing and we would be left drifting.

“At present we are in drifting mode, right in the middle of a fleet of fishing boats about 40 strong. Thankfully the path through is pretty clear. We are expecting continued light winds until later on where the wind should start filling in first from the south east, followed by a back to the north where it should set pretty strong as a low pressure system makes its way over us.

“After that it looks like we should keep in breeze for the remainder of the race, albeit from the north,” Matt added.

Max Stunell, Skipper of PSP Logistics, in tenth position, also described the frustrations: “The wind gods are being fickle again and today it seems even the current has stopped running in our favour, frustrating but it seems to be fleet wide fortunately.

“Yesterday we had very similar conditions then it suddenly picked up after lunch so fingers crossed.

We are currently just over 250 nautical miles south of Shanghai with 550nM to go until Qingdao although with some toing and froing that distance will inevitably increase,” Max added.

Who will be first into Qingdao? Who will best take advantage of the winds due to fill in?

* All results are provisional until verified by the Race Office Committee upon the yachts’ arrival into Qingdao.