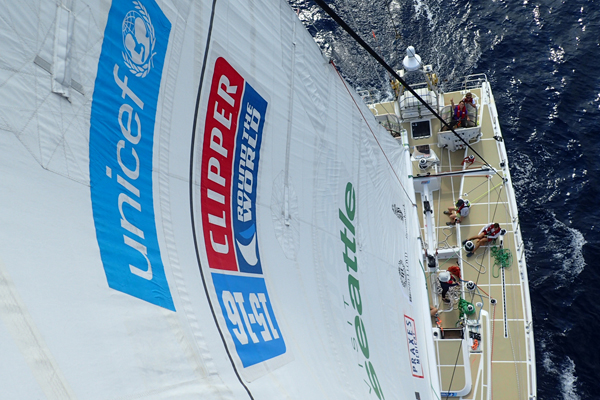 Onboard Unicef during the Clipper Race. Photo Clipper Ventures.

A front is moving over the fleet, with north-easterly wind between 30 to 40 knots and a swell of three to four metres as the teams beat upwind in the final 400 nautical miles to China.

With shifty conditions over the last 24 hours meaning lots of sail changes including between various spinnakers before the wind backed, the fleet took time to prepare for the incoming storm.

With the final denouement approaching, final positions will depend on who best weathers the storm, and whether the inshore or offshore route will pay off.

LMAX Exchange is now in the lead, 7.35 nautical miles ahead of second-placed Derry~Londonderry~Doire, with former race leader Garmin 10 nautical miles behind the Northern Irish entry in third place.

“Last night the winds were light and a little shifty but mostly from the east-south-east, which meant that over the past 18 hours we've gone from headsails to spinnaker, back to headsails and now with the wind certainly notching up a bit, this morning has been spent changing down those headsail gears and reefing.

“The temperature is cool but not too extreme so relatively refreshing. It makes a big difference wearing the right stuff though! No such thing as bad weather, just bad clothing and all that! So Qingdao seems closer but with the forecast it's going to take us a bit of beating into some strong conditions to get there. Another stage of battening down hatches before we finish this little race,” Peter added.

Huw Fernie, Skipper of Visit Seattle, in seventh place, said: “We're expecting a storm so this morning we are doing a few last little bits of tidying and getting ready, after a few calm days it could be quite good fun. Everyone is looking forward to making some fast progress towards Qingdao and seeing how the closing stages of this Sailing City • Qingdao Cup will pan out. Although the fleet is nicely spread out there is still a lot of potential for gains and losses, and a lot of sailing to be done,” Huw added.

Will LMAX Exchange hold onto its lead to take its fifth race win of the series? What will be the outcome of the duel between Garmin and Derry~Londonderry~Doire?
All positions correct as of 1000UTC.