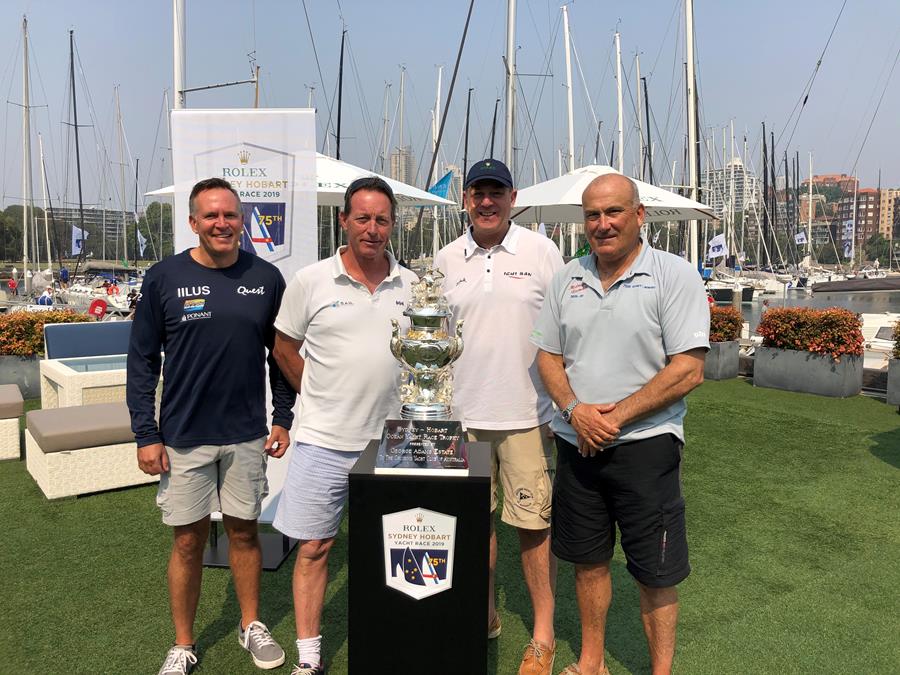 Five contenders to win the famous Tattersall Cup, awarded to the winner of the Rolex Sydney Hobart Yacht Race each year, were mulling over their chances this morning, trying to decide which boats would be favoured to win the 75th running of the Cruising Yacht Club of Australia’s annual blue water classic.

Apart from winning the 2017 Rolex Sydney Hobart with his then new TP52 Ichi Ban, Matt Allen has since won a plethora of trophies, resulting in Ichi Ban being named Royal Ocean Racing Club’s Boat of the Year – from among the best racing yachts in the world.

Allen will sail his 30th Sydney Hobart this year and would love to win the 75th race, but said today, “I think with the weather forecast will make it a really interesting race. There’s going to be quite a few transitions that will put pressure on the tacticians, navigators and watch captains to get through those transitions,” the Sydney yachtsman said.

“To win the race, I think the all-round performers will have an advantage over the rest. It’s really wide open and will be a great challenge out there. Of the boats our size, there are 14 or so really good ones – so that will be a challenge it itself.”

Midnight Rambler’s skipper, Ed Psaltis said, “It’s a good fleet, but a much, much larger fleet. We’re keeping our feet on the ground, but hoping to win our division. Midnight Rambler loves upwind sailing, and we’ll get a bit of that. Reaching is our weakness.

With Bob Thomas, Psaltis won the 1998 Sydney Hobart on their little Hick 35, Midnight Rambler. He is again racing one of the smallest boats in the fleet, a Sydney 36. In a career spanning 37 Sydney Hobarts, Psaltis has scored many offshore race wins.

“In our size range though, I can’t go past (Willie Smith’s) Philosopher, it’s a similar boat to ours (a modified Sydney 36 cruiser/racer). We race against them regularly in Hobart and there’s never anything in it.

“We both did the Maria Island Race and were never more than 10 boat lengths apart through 30 hours of boat racing. They push us hard,” said Psaltis, who early this year relocated from Sydney to Tasmania where he has sailed his yacht from to ready it for the start.

Carl Crafoord is the co-owner, skipper and navigator of the Cookson 12, Sail Exchange. He has won the Sydney Hobart overall four times in the past – one of only three people to do so – but on other people’s boats. He is also keen to win the 75th, as he would then equal the record five set by two sailing greats who have since passed on; Magnus Halvorsen and Captain Stan Darling.

“Stan taught me to navigate the old school way – with a sextant. He was the master. He taught me all about how the weather works. I would love to be up there with those guys,” Crafoord said.

“We have Sail Exchange in good shape and the crew is in good physical shape. One of the things we worked on during the year was mental strategies and mental strengthening. It’s been extremely interesting working on this over our three month course, which included meditation and mental home work.”

Craig Neil has joined forces with Bob Steel in the re-purchase of Steel’s Quest. The TP52 won the 2008 Rolex Sydney Hobart as Quest and the 2015 race as Balance for Paul Clitheroe. With Steel back at the helm in 2017, Quest finished the race runner-up to Ichi Ban. There was just 10 minutes in it.

Firing a warning salvo to Matt Allen and the other TP52 owners, Neil said this morning: “The crew has come together really well. We won the Bird Island Race at the end of November – one of the only boats to beat Ichi Ban this year. We’re feeling confident. We have spent time and money on Quest and feel it’s quick. We know it’s an older TP52, but it still keeps good pace with these newer models.

“I think there is a race within the race between the TP52s, but there’s obviously any number of other boats to beat as well. It is not going to be easy.”