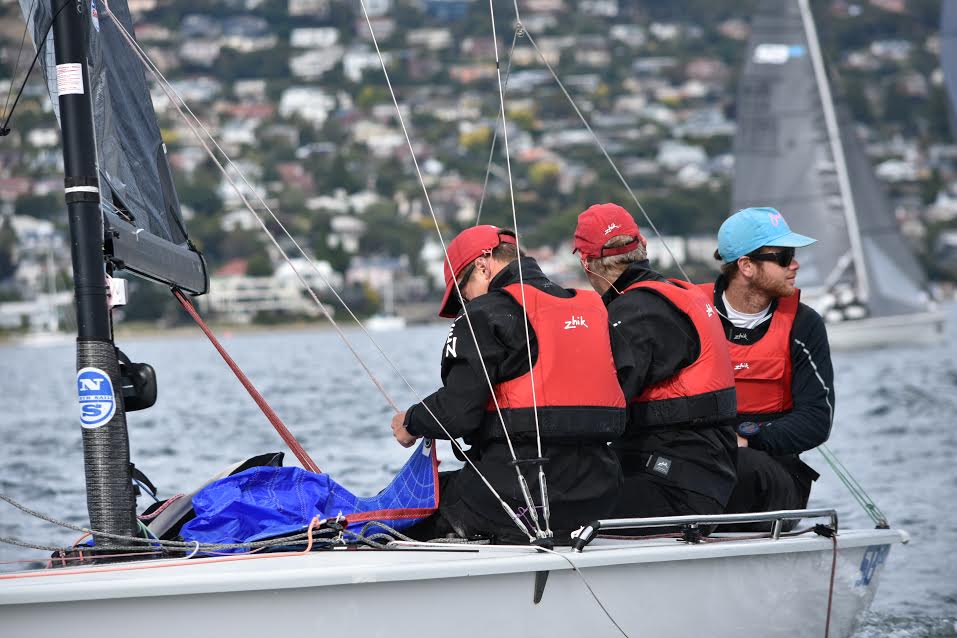 Elliot Noye at the helm of Porco Rosso

Tasmanian SB20 one-design sports boats, Export Roo and Porco Rosso, are equal first on points after day one of class racing at historic Cowes Week on the Isle of Wight, off the south coast of England.

Export Roo, skippered by Michael Cooper, had two second places while Porto Rosso, with Elliott Noye on the helm had a third and a win in the almost entirely British fleet.

Cowes Week is being used by Cooper, Noye, Stephen Catchpool (Hypertronics) and Andrew Smith (Smigger) as part of their lead-up to the 2017 World championships on The Solent in late August.

The Tasmanian crews coped well with the tricky sailing conditions of The Solent, a west-south-westerly breeze with the current at the top mark at least three knots flowing against the boats.

Tacking up the shore to escape the strong tide each of the Australian boats hit the bottom several times. “I’ve never experienced hitting the bottom so many times in a race before,” commented Cooper, who has contested the past two World championships with impressive results.

Race one start line was off the Royal Yacht Squadron, along with close to one thousand other boats in a multitude of other classes that make up the UK’s traditional regatta.

Paul McCartney commented: “This is about learning to sail The Solent. In the first race, we rounded in first but a navigational error took us back to third. In the second, we came off the start and went right – that's where the breeze seemed to be.

“It went very very soft – it was very hard to keep the boat moving particularly through all this chop and swell. We kept at it and managed to stay up the front. The shortened course – we were very pleased with that”.

Michael Cooper said he had never experienced hitting the bottom so many times in a race before. I think we hit it five times – most of the fleet hit it at some point.

“And that's what you have to do – you hit the bottom and you tack because the tide runs so strong down the shore. It was a long race, it was round the bay racing so we ended up on the other shore, then we prepared for the second race which was windward/leewards.

“The Aussies sailed really well – they were consistent – most of them were up there at the top mark in most races. It was good to see the Hobart fleet is on the pace.” (Hobart will host the 2018 Worlds next January).

“Never really sure how far we could go in. We went for a reach and a run and picked up quite a few places, finished in 15 places.

“Race Two – got a good start – one-mile beats – we were fifth to the top mark on the first lap, seventh on the second lap and they shortened at the bottom; we had a bad gybe at the bottom and we lost two places.

“Tomorrow is going to be very windy. Hopefully we won't be tacking up that shore in 25-20 knots. we have a better idea now than we did this morning about where we can and can't go. it's really not very well marked. There are little oil containers floating along the shore which apparently mean you can't go too close as its too shallow – but we thought they were lobster pots.”

As SB20 Australian president said: “The Aussies are doing very well with a first, second and third Four Australians in the top 10 – I think we are performing pretty well.”

South-westerly winds of 6-20 knots, gusting to 25 knots are predicted for day two of Cowes Week.

On Lake Garda, Italy, Tasmanian Rob Gough has finished 25th overall in the gold fleet at the foiler Moth World championship. Results are not available for the Masters division but Gough was at the top of leader board going into the gold fleet racing.

Gough’s next sailing campaign will be the SB20 Worlds at Cowes, sailing Difficult Woman.