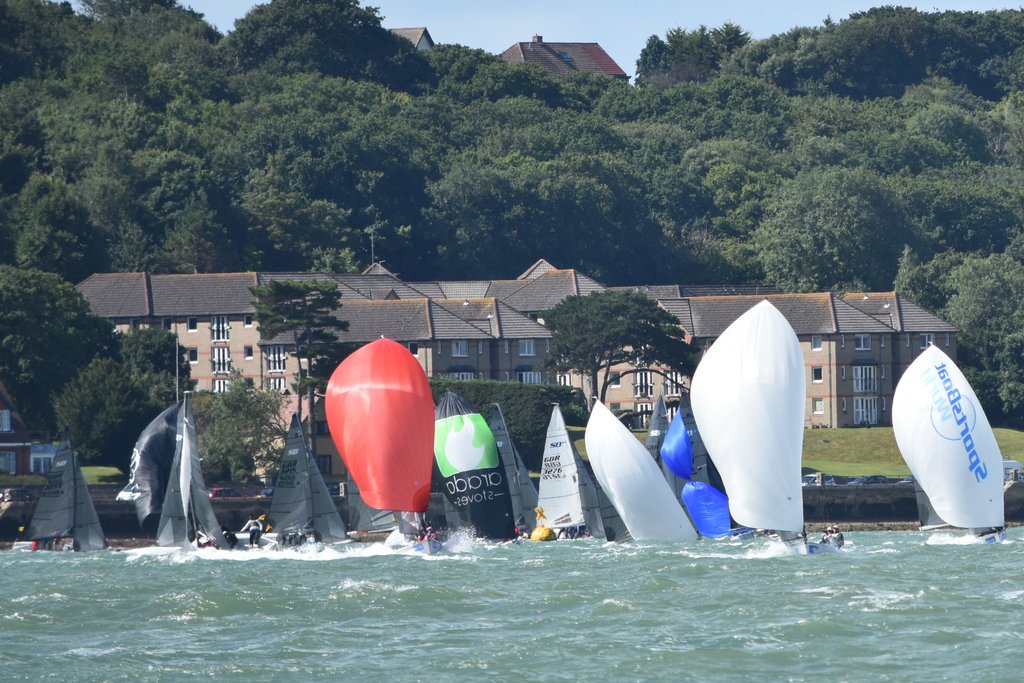 The SB20s come roaring out from the Cowes shore. Photo Jane Austin

Prominent Hobart yachtsmen continue to dominate results in the SB20 one-design sportsboat ‘Cowes Grand Slam’ being sailed on The Solent off Cowes on the Isle of Wight off the south coast of England.

The SB20s are racing as part of the historic Cowes Week with The Solent overnight turning on very windy conditions – 20-plus knots gusting to 30 in the late afternoon.

The Cowes Grand Slam is one of the lead-up regattas on Th Solent for the 2017 World championship for the SB20s with six crews expected to compete. The Royal Yacht Squadron at Cowes is running the Worlds which will be held in Hobart in 2018.

Paul Burnell became the second Australian to win a race at Cowes Week, steering the British yacht Marvel to first place in race four on day two of the regatta. His brother Tim is sailing as crew with owner Richard Powell.

Despite two wins by the strong British continent, Tasmania’s Porco Rosso, with Elliott Noye on the helm, has maintained overall lead with placings of 2-3 on day 2 following a third and a first on day one.

Hypertronics (Stephen Catchpool) finished sixth and ninth across the line in today’s two races but received at late penalty (NOD) for failing to lodge a declaration after the racing. It cost 33 points for each race and has dropped the Hobart boat to 21st overall.

Smigger (Andrew Smith) has found the conditions tough going with an 18 and 17 in yesterday's races.

The stand out helm at the Lendy Cowes Week has certainly been young Tasmanian sailor Elliot Noye.

“We (Porco Rosso) had a really good day – we had plenty of boat speed – we were sitting first for the majority of race three,” Elliott said.

“We had an unfortunate gybe where we had to ditch the spinnaker and drop the halyard so that cost us probably ten or fifteen seconds which gave enough room for a British boat to get passed us – but we were very happy with second.”

“Going in to Race four we had a solid game plan to go right in the first beat and that worked out OK – we were round the top mark in about third and managed to get ourselves into second.

“At the second top mark we hit the mark and had to take a one per cent time penalty, and we finished third overall in that race. “However, overall with a two and three today we are very happy.”

Noye described the conditions on day two as “ pretty tricky”, adding “ we had quite a bit of breeze on and a bit of tide as well.

“There was some short tacking up there in the first race …you just had to get out of the tide. We started in about 15 knots and built to 20 gusting to 25-20 – we had a bit on and our downward rides were great.”

Noye’s thoughts on the Australian fleet as it shapes up for the SB20 2017 World Championship to be sailed at Cowes in late August: “Its great to see the Aussie guys coming over here and doing really well.

‘’We have a strong contingent back home and coming over here and learning how to sail [on The Solent] is only going to put us in good stead for the Worlds here,” Noye added.