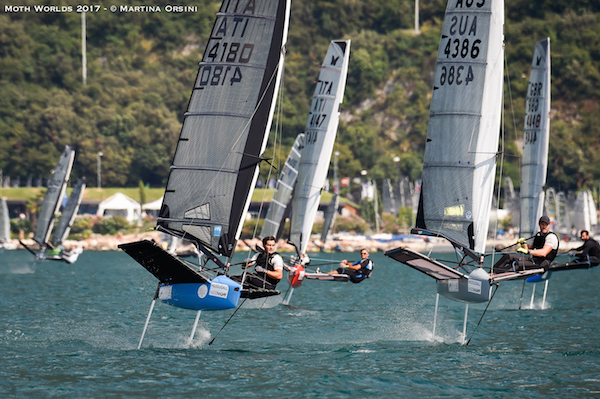 The final series of racing at the 2017 McDougall + McConaghy Moth Worlds got underway today in more glamorous conditions on Lake Garda with the Gold, Silver and Bronze fleets released just after lunchtime for four races on two race courses.

The hottest Moth Gold fleet ever left the shore around 1300 hrs for four back-to-back races on the Southern course in a light to moderate breeze from the South. Consistent shifts and an over eager hungry fleet led to a string of U flags, black flags, postponements and one race cancellation when the breeze collapsed at the top end of the course.

Eventually two hours later a frustrated PRO managed to get the fleet to behave enough to sail a shortened version of the usual windward / leeward race track. The breeze settled in about 12 – 14 knots but at the top end, it was quite a lot weaker, nearer 8 knots and marginal foiling.

From the start it was a mad sprint to hit the shore, right in front of the Fraglia Vela Malcesine club, again proving popular with spectators and the weekend diners out on the terrace. The leaders tacked up the shore line taking advantage of all the little bays where the breeze scalloped in puffs.

A number of boats overstood the top mark, Pete Burling (NZL) led Nathan Outteridge (AUS) and Rob Greenhalgh (GBR) third. The downwind dash was really quick, Burling crossed the finish line in around 15 minutes with Outteridge 2nd, Greenhalgh 3rd and Paul Goodison (GBR) 4th, his worst result to date. Iain ‘Goobs’ Jensen (AUS) was up in the leaders again in 5th, but Tom Slingsby (AUS), second at the start of the day, crossed in 7th.

A short turn around and race 2 started in similar conditions, however, the race course was extended a bit to make a longer race track. More general recalls and the black flag came out again.

The first leg was again a mad sprint to the Eastern Lake shore. Again it was Burling leading the pack from Kohei Kajimoto, a Japanese Moth sailor who lives in Australia. Goodison was back in 6th position but gaining rapidly on Kohei downwind to the finish.

Burling finished this one by a big margin, Kajimoto holding on for a really well deserved 2nd and Goodison settling for 3rd. Jensen consistently racing in for 4th and an excellent finish for Corinthian sailor Matthew Chew from Queensland in Australia.

RO Tim Hancock didn’t hang about banging off the races, rolling straight into race 3 of the day. No real changes on the course again and all clear at the start this time. Goodison led this one from the flying kiwi, Burling with Jensen just behind.

Scott Babbage (AUS) was back in the mix, but Greenhalgh deep in the teens. On the last downwind Burling came in on a tight angle making use of the pressure that had started to build in the middle of the race track, (a regular occurrence at this time of day).

However, Jensen and Babbage had judged the layline to the finish to perfection, speeding past Burling. Goodison scored his first bullet of the day, Jensen 2nd, Babbage 3rd, Burling dropping to 4th. Josh McKnight came in for his best finish of the final series in 5th. Slingsby in his customary 7th was beginning to lose his grip on second overall.

The last Gold fleet race of the day, number 8 of the championship, was started in a patchy breeze as the sun was getting low in the sky. The sight of a fleet of Moths spread across the lake in the late evening sunlight was a photographers dream and fully appreciated by the onlookers sipping their Aperol aperitifs under the club umbrellas.

Some of the big names watching some racing included Russell Coutts and his lads, and Olympic Gold medallist Santiago Lange, another master getting used to foiling catamarans.

As the leaders surged up the middle of the course it was, of course, the current world champion Goodison fighting it out with 2015 world champion Burling. This time there was the sad sight of the other former world champion Outteridge, limping in to shore with a broken wing bar.

The Brit and the Kiwi were sprinting clear but the chase was on for the remaining podium place. Babbage was having another good race and the home Italian fans were pleased to see Francesco Bruni amongst the leaders.

Goodison glided down the final leg in the fading sunlight to take his second bullet of the day and keep a comfortable cushion between himself and Burling before the final day or racing. Burling crossed in second to pull himself up to second overall and Babbage took third to pull back into the top 6.

Going into the final day of racing, Paul Goodison has a handy 13 point cushion over Pete Burling on 26 points. Iain ‘Goobs’ Jensen had another excellent day to move into a comfortable 3rd position on 29 points.

Goody sums up his day: “In the first race I overlaid the first mark a bit and it put me down the fleet after that I got it together,

“I had a little scare on the last run in the last race, I snapped the tip off the foil so I was sailing around with a bit of drag, but hung on in there and came good in the end so pretty pleased with today. Kiwi Pete was starting really well and going upwind really nicely so it made me pick up my game a bit later in the day.”

Burling adds: “It was a pretty long day on the water, I think we were out for about 5 and a half hours so most people will sleep pretty well tonight. I am just getting used to the boat and in that last race I felt I had pretty good speed but a bit tired. Goody just kept hiking!”

Gian Marie Ferrighi of Italy didn’t finish the last race of the day but remains top in the Youth category in an impressive 16th position. Rob Gough (AUS) overtakes Jason Belben (GBR) to the top Master spot. Annalise Murphy (IRL), still with a constant smile on her face, remains the top female competitor.

The Silver fleet raced four races on the trot on the North course. John Clifton (GBR) continues to lead but David Holenweg from Switzerland has a good day to close the gap. In third is Olympic Laser sailor Philipp Buhl from Germany.

Tom Slingsby slipped to 4th with a 7,8,7,8 for the day. Despite suffering more damage, Nathan Outteridge was saved by the fact a second discard comes into play after 8 final races are completed, so moves into 5th on 48 points.

Rob Greenhalgh drops down to 7th after another tough day on the water but Dave Hivey holds onto 10th spot. Also, the two Italian boats Francesca Bruni and Carlo de Paoli Ambrosi are just outside the top 10 in 11th and 12th respectively.

Gian Marie Ferrighi of Italy didn’t finish the last race of the day but remains top in the Youth category in an impressive 16th position. Rob Gough (AUS) overtakes Jason Belben (GBR) to the top Master spot. Annalise Murphy (IRL), still with a constant smile on her face, remains the top female competitor.

The Silver fleet raced four races on the trot on the North course. John Clifton (GBR) continues to lead but David Holenweg from Switzerland has a good day to close the gap. In third is Olympic Laser sailor Philipp Buhl from Germany.

The Bronze fleet went out at lunchtime for two races then came back for a break before returning to the South course for 2 more races in the evening breeze. Grand Master, Hans Rasmussen from Denmark leads the fleet from Maximillian Mage from Germany and Youth category sailor, David Simmonds from the UK.

The final day of racing for all fleets on Sunday will not commence before 12 noon.