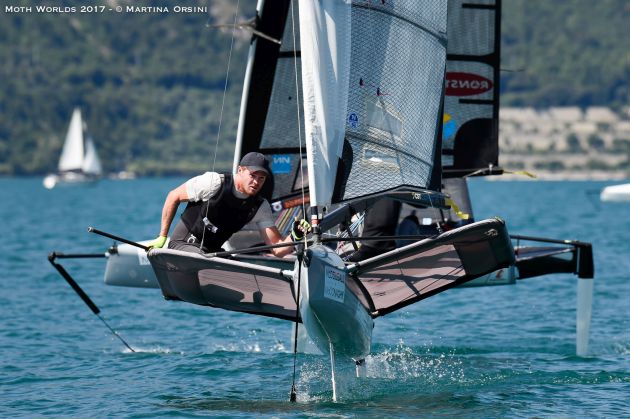 Paul Goodison (GBR) smashes it on the final day of racing at the 2017 McDougall + McConaghy Moth Worlds at Lake Garda against the hottest fleet of Moths ever assembled. Goody (to his friends), is the first foiling Moth sailor to win back to back world titles and the result is that much more special considering the high calibre of competition from the most recent top Americas Cup skippers and sailors with more Olympic medals around their necks than any other regatta with exception of the Olympic Games itself!

Going into the final day of racing Goodison begun the day with a 13 point cushion over Pete Burling (NZL) with Iain ‘Goobs’ Jensen with an outside chance of catching Burling.

The weather gods turned it on again for the final day of racing when a light ‘Ora’ started to build from the South around lunchtime and any fluffy little clouds dispersed to leave another fine sunny afternoon for racing.

The Gold fleet was sent out around 1330hrs to race on the South course to complete as many races as possible before the cut off time of 1600hrs. Race 9 of the championship started under the black flag in 12 – 14 knots of breeze with flat water. As usual, the aim was to charge to the Eastern shore and before hitting the rocks in front of the Fraglia Vela Malcesine clubhouse, tack and try to find a clean lane of pressure to get to the top of the course in good shape.

At the windward gates, the breeze was quite soft causing a number of boats to drop off the foils, especially if squeezing round the marks. On the first lap, it was Scott Babbage (AUS) leading, followed by the young gun, Gian Ferrighi (ITA)  with most of the big names in the top 10. The downwind leg proved a bit more shifty and the pack shuffled. It was Tom Slingsby (AUS) who stayed in the best pressure to take the win from Nathan Outteridge (AUS) with Rob Greenhalgh (GBR) third, Burling 5th and Jensen 6th.

PRO Tim Hancock did a good job of setting up for race 10 under the same conditions. Started under a black flag it was a similar story with slightly different players. The breeze shifted a bit right and begun to drop at the top end causing some competitors to drop off the foils.

At the bottom gate, the action started to unfold, Jensen got round just in front of Slingsby but Slingers dropped off the foils bang in front of Outteridge and Babbage, allowing Goodison to slide past inside avoiding the low riders. Burling was also in trouble rounding the opposite gate and dropping off the foils. Greenhalgh was also in a world of pain.

Coming into the finish it was Jensen who crossed the line with a massive lead and a big smile on his face as he closed up the points to second placed Burling to one point. Second was Goodison to all but seal the title. Many competitors had fallen off the foils in the soft patches around the course. Singsby crossed third but Burling was deep in the pack.

With time running out and the breeze getting a bit weak, the PRO announced that the third race of the day, race 11 of the world championship would be the last. The last race would be victory laps for Paul Goodison but the chase for second and third place would be decided on the last race between Burling and Jensen.

The last race started in the same light to moderate breeze, 11 – 13 knots from 215 degrees. Again the fleet used the clubhouse shoreline for a flyby in front of the grandstand of supporters. This time it was Tom Slingsby who looked like he had made the right foil choice leading the world champion elect with some of the usual suspects struggling with foil selection. Slingsby cruised across the finish line for a second win of the day with the victorious Goodison crossing in second.

A good third for West Australian, Steve Thomas, Babbage finished a consistent 4th and Jensen in 5th finishing comfortably ahead of his skipper of so many years, Nathan Outteridge. As Burling crossed in a lowly 17th, supporters scrambled for their calculators to do the maths.

Agonisingly for Goobs Jensen he fell one point short of toppling the Kiwi but was very happy with his third place overall. With Slingsby’s final day score of 1,3,1 he held on to 4th and Scott Babbage came back from the brink early in the regatta to snatch 5th off Nathan Outteridge.

The Youth category went down to the wire on the final day with a fine battle between the two Italian twins Gian Marie and Stefano Ferrighi. With an 8th in the final race on Saturday and a 9th today (Sunday), Stefano stole the title from his brother by 3 places. Stefano finished 23rd overall an excellent performance in a fleet of champions.

The Master's category swung between Jason Belben (GBR) and Rob Gough (AUS) and a similar tussle played out. Rob Gough won this one finishing 25th overall to Jason Belben’s 28th.

First in the female category went to Irish Olympian Annalise Murphy who finished 51 in the Gold group.

The Silver group was won by John Clifton (GBR) and the Bronze group won by Maximilian Mage of Germany.

PRO Tim Hancock and his team did a great job getting through so many races for a fleet of 220 Moths, the biggest Moth regatta ever assembled.

A bit shout out to the two Moth workshops running the Moth hospital to keep sailors out there on the water doing what they do. The legend that is Simon Shaw and his team at event title sponsor, McDougall + McConaghy and Simon Maguire and his dad Tony did an amazing job behind the scenes.

Also a huge thank you to Fraglia Vela Malcesine, host club for their race management, hospitality and the pasta that has kept over 200 mothies racing for a week.

Of course, it goes without saying that the regatta only took place due to the support of great sponsors and suppliers such as McDougall + McConaghy, Veneri, Zhik and Negrinautica and a long list of Fraglia Vela Malcesine local sponsors.

The 2018 Moth Worlds will take place in Bermuda and we hope to see everybody there for more high octane action in this incredible class.