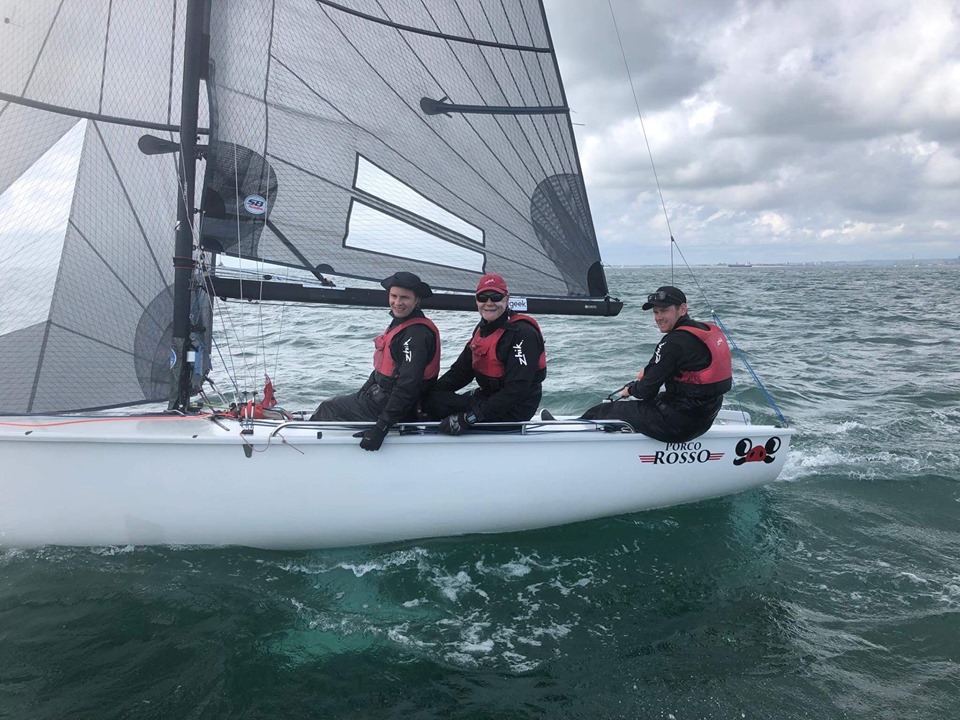 Tasmanian champion SB20 crew, Elliott Noye, Paul McCartney and Edward Snowball, have made an instant impact on the British fleet of SB20 sportsboats, sailing on The Solent off Portsmouth.

Sailing McCartney’s Europe-based Porco Rosso, they have won six of the first nine races at the SB20 United Kingdom Open and National Championship for the sportsboat class over the weekend.

With one race to complete the championship overnight, the reigning British champion boat Xcellent, skippered by John Pollard, holds a three point margin over the Tasmanians.

Unfortunately, a UFD starting line disqualification in race seven means that Porco Rosso has to carry an eighth in race four in their net score, while Xcellent’s drop race is a fourth.

The UK Nationals is the first regatta in Northern Hemisphere waters this summer for the Porco Rosso crew, leading up to the SB20 World Championships at Hyeres, France, in October.

The Porco Rosso teams experienced the highs and lows of sailing on day two of the championship, hosted by the Sea View Yacht Club.

After dropping their worst result (8) after Race 6, Porco Rosso, owned by McCartney and helmed by Noye, with Snowball at the bow, moved to the top of the leader board, with a one point lead from Xcellent.

Porco Rosso needed to consolidate their lead in Race 7 in a regatta that was becoming a three way tussle between Xcellent, Porco Rosso and the Ukrainian crew, Game Changer (Julia Freespirit), but instead was one of four boats penalised for being over the line at the start with the U flag up.

Race 8 was again a close contest between Pollard and Noye. The NoR had up to four back-to-back races scheduled for day two, however the Championship PRO opted to sail Race 9 with heavy conditions forecast for the final day of sailing.

The Aussie lads were on fire in the last race of the day, blitzing the fleet of 12 boats (five-DNC) while Pollard had his worst race of the regatta, finishing in fourth.

Porco Rosso spent some time in the protest room at the end of Day Two of sailing to no avail, and head into the final day of sailing on 17 points, three points behind Pollard and three ahead of Freespirit.

Day two was sailed in moderate to fresh south-westerly winds varying between 16 to 26 knots.