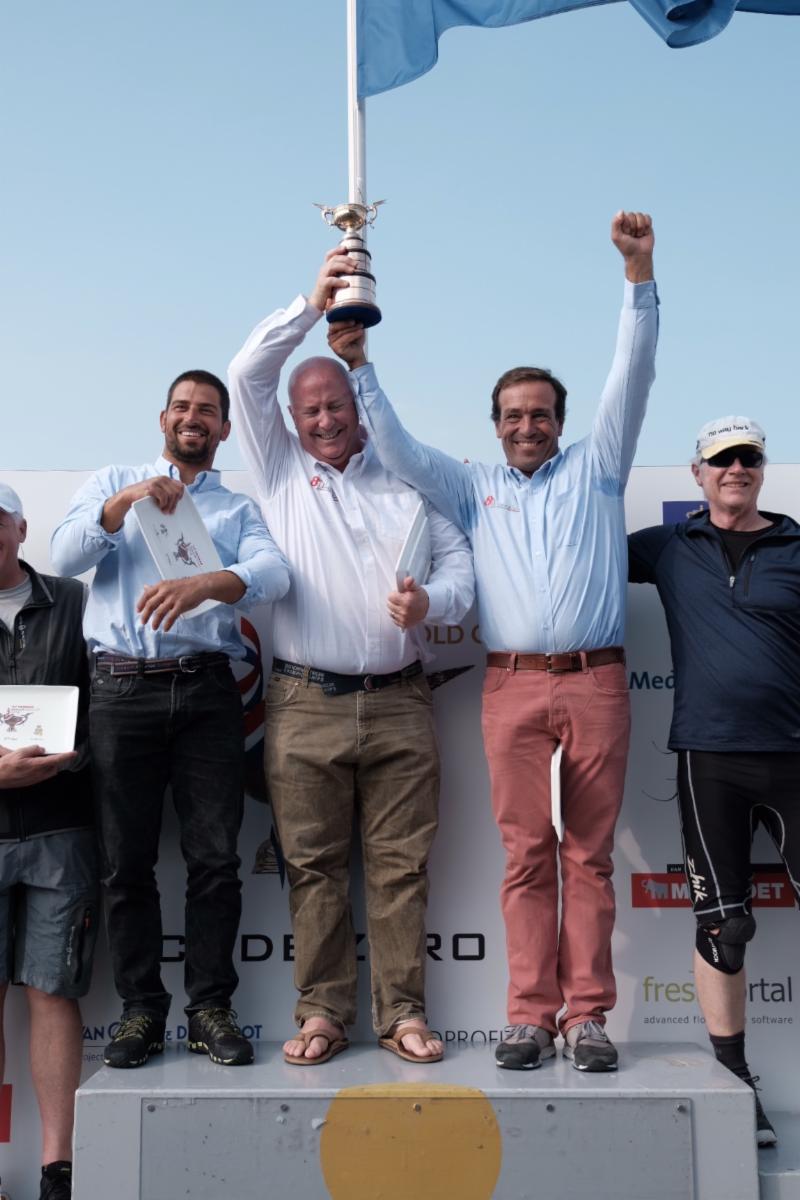 The final day of the Yanmar Dragon Gold Cup 2019 in Medemblik was a frustrating one as the wind refused to stabilise sufficiently to complete a race, and despite there being wind in the race area, it simply wouldn't stop shifting and ultimately no race was possible.

The trio had battled several major gear failures during the week, including a broken gooseneck, ripped spinnaker, failed bilge pumps and a broken runner, but in spite of that, they not only won the regatta, but won it by a convincing ten points.

Andrade, who has made the Gold Cup podium twice before but never won it, was keen to pay tribute to his rivals.

“They sailed really well and it was hard to stay ahead of them sometimes. Peter Gilmour had one bad race; otherwise he would have been really close to us. And Pieter Heerema was always looking smart somewhere on the race course.

“Fortunately it went our way, but still a great job by those two teams.” In his acceptance speech he also paid tribute to his crew and to the organisers and sponsors who did such a superb job of running the regatta.

Second place overall went to Vendee Globe veteran Pieter Heerema of The Netherlands, who was sailing with 2005 49er world champion, George Leonchuck, as well as Lars Hendricksen, who has won the Gold Cup twice as a helm and is also a double Dragon European champion.

Heerema has made the Gold Cup podium three times before, including last year with the same crew, and was surely hoping that it was his turn to be the bride and not the bridesmaid, but it was not to be.

Had it not been for a disastrous third race the result might have been different, but the no discard rule is one of the things that makes the Dragon Gold Cup such a very special and challenging trophy to win and it put paid to Gilmour’s hopes.

Double Olympic Gold Medallist and Dragon sailing, legend Poul Richard Hoj-Jensen, who the Dragon fleet simply calls ‘The Man’ in recognition of his immense contribution to the class, took victory in the Corinthian Division. Or as he calls it, the “weekend sailors' class”.

Crewed by old friends Hamish McKay and Chris Brittain, 75 year-young Hoj Jensen may class himself as a weekender, but he has won the Gold Cup an incredible five times and remains a fearsome competitor. He finished ninth in the overall competition this week.

After sailing he paid tribute to the quality of the event organisation. “They could not have got it much better, we had light wind, we had good strong wind, and they have organised it very, very well.”

Second place in the Corinthian Division went to Sweden's Martin Pålsson, Peter Lindh and Thomas Wallenfeldt, while local hero Jan Bakker, who sailed his first Gold Cup in 1963 and raced this week with his sons Dominic and Oliver, took the third step on the Corinthian Podium.

The Nations Cup Trophy, for the three boat national team's competition, was won by the British Team of Grant Gordon, Richard Hoj-Jensen and Gavia Wilkinson-Cox with 214 points. In second was the Russian Team of Dmitry Samokhin, Anatoly Loginov and Igor Goikhberg with 220 points, while third went to the Danes, Frank Berg, Jens Christensen and Jørgen Schönherr.

Dutchman, John den Engelsman, took home the Silver Cup Trophy, which is awarded to the winner of the Silver Fleet or the boat that finishes at the mid-point in the ranking if the regatta is sailed as one fleet. Den Egelsman is a huge character in the Dutch fleet and his win was very well received.

The next Dragon Gold Cup will be held in Kinsale, Ireland from 5-11 September 2020. This always popular Dragon sailing venue combines a wonderful shoreside ambiance with superb racing on the spectacular Bay of Kinsale and great Irish craic, so another great turnout is expected. Further information about the event is available from www.dragongoldcup2020.com

Later this year, the International Dragon has its 90th birthday and the class will be celebrating in style with a very special Gala Regatta to be held in Sanremo, Italy from 5-11 October 2019.

The event will bring together Dragons, Dragon sailors and friends of the class from around the globe and across the generations to celebrate this milestone in the class's history. Already 130 entries from 25 nations and four continents have confirmed their participation. Further information about the 90th Anniversary Regatta can be found at: www.dragon90.com.