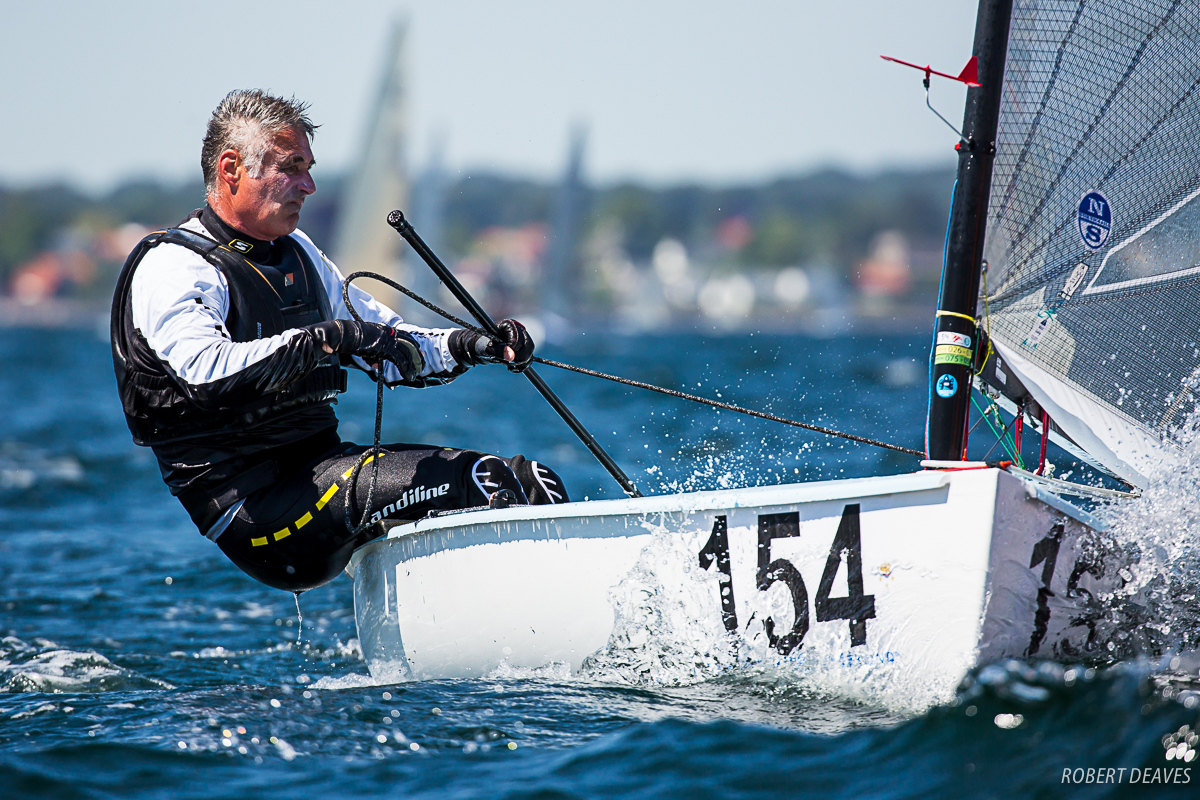 Vladimir Krutskikh, from Russia, has won his third Finn World Masters title after the final day of racing at Skovshoved, Denmark, with two more races in great conditions. Mike Maier, from Czech Republic, finishes second with Laurent Hay, from France, in third.

Krutskikh began building a picket fence on Monday and carried on each day picking up first places in each and every race. His final score of seven wins from seven races is remarkable given the calibre of the fleet and the challenging conditions.

With a limited time window to get in the two final races, it needed to go smoothly with the fleets away without recalls. And smoothly it went with each fleet of 124 boats getting away first time. For the second day running, the sub-tropical conditions were a delight with 8-12 knots of breeze.

In the Yellow fleet Felipe Silva, from Portugal, rounded first from Maier and Paul McKenzie, from Australia. Silva extended for his second win of the week from Maier and Hay. In the final race, Hay led at the top mark for the first time this week from and maintained that to the finish to win from Axel Schroeder, from Germany, and Christian Gunni Pedersen, from Denmark.

In the Blue fleet Krutskikh rounded from Taras Havrysh, from Ukraine, and Anthony Nossiter, from Australia. Nothing much changed until the finish, though Krutskikh extended for a large win to take the title with a race to spare. He also led the final race all the way to win from Peter Overup, from Sweden and David Terol, from Spain.

While numbers were down on last year, 248 Finns is still a huge fleet of boats and sailors to manage, and the Royal Danish Yacht Club has done an amazing job to keep everyone fed, watered and looked after on the water. It is never an easy task to organise such a huge event, but the huge amount of volunteers and club members have made everyone feel welcome.

Krutskikh explained his victory: “The regatta was very beautiful for me because I had a local coach from Denmark, Christian Rasmussen, who helped me a lot because every day he told me about the forecast, the current, about changes in the wind, so that was very good for me, because he knew some tricks with the wind and clouds.”

“The regatta was very beautiful because there were lots of very strong sailors. For this regatta the start was very important, and tacking from right side as it was a very strong current. For this reason I try to play close to committee boat.”

“For me, everything was good. I won seven races so I am very happy.”

“This is my third Finn World Masters title and I’ll be back next year to defend in The Netherlands…probably.”

The Masters age category title was dominated by Krutskikh but there was a close battle between Christoph Christen and Anthony Nossiter for second.

Nossiter, at his first Masters was so enthusiastic with the organisation and the racing that he bought a boat this week so he could reignite his Finn career and train for next year. He wants to see all his friends from his Olympic years back in the class, sailing the Masters.

Mike Maier took the Grand Masters Trophy, overcoming the early leader, Laurent Hay from France. The 1988 Finn Gold Cup winner, Thomas Schmid, from Germany, was dominant in the very competitive Grand Grand Masters to finish in eighth place, 14 places ahead of runner up John Greenwood, from Britain, who is also a double World Masters champion.

Henry Sprague continues to defy his age by not only winning his third Legends Trophy, for sailors over 70 years old, but to do so while beating hundreds of sailors 20 to 30 years younger than him to finish 17th overall.

All Legends and Super Legends are honoured each year, a remarkable group of sailors who confront the challenge of old age with the unique challenge of the Finn.

The championship ended with a great prizegiving and free bar and as the event ended, so did the nice weather, with the traditional Danish weather returning to assist those late in packing up their boats.

In 2020, Finn Masters from around the world are invited to gather in Port Zélande, in The Netherlands, for the 50th Anniversary Finn World Masters, which is already promising to be the biggest Finn event on the planet…ever.