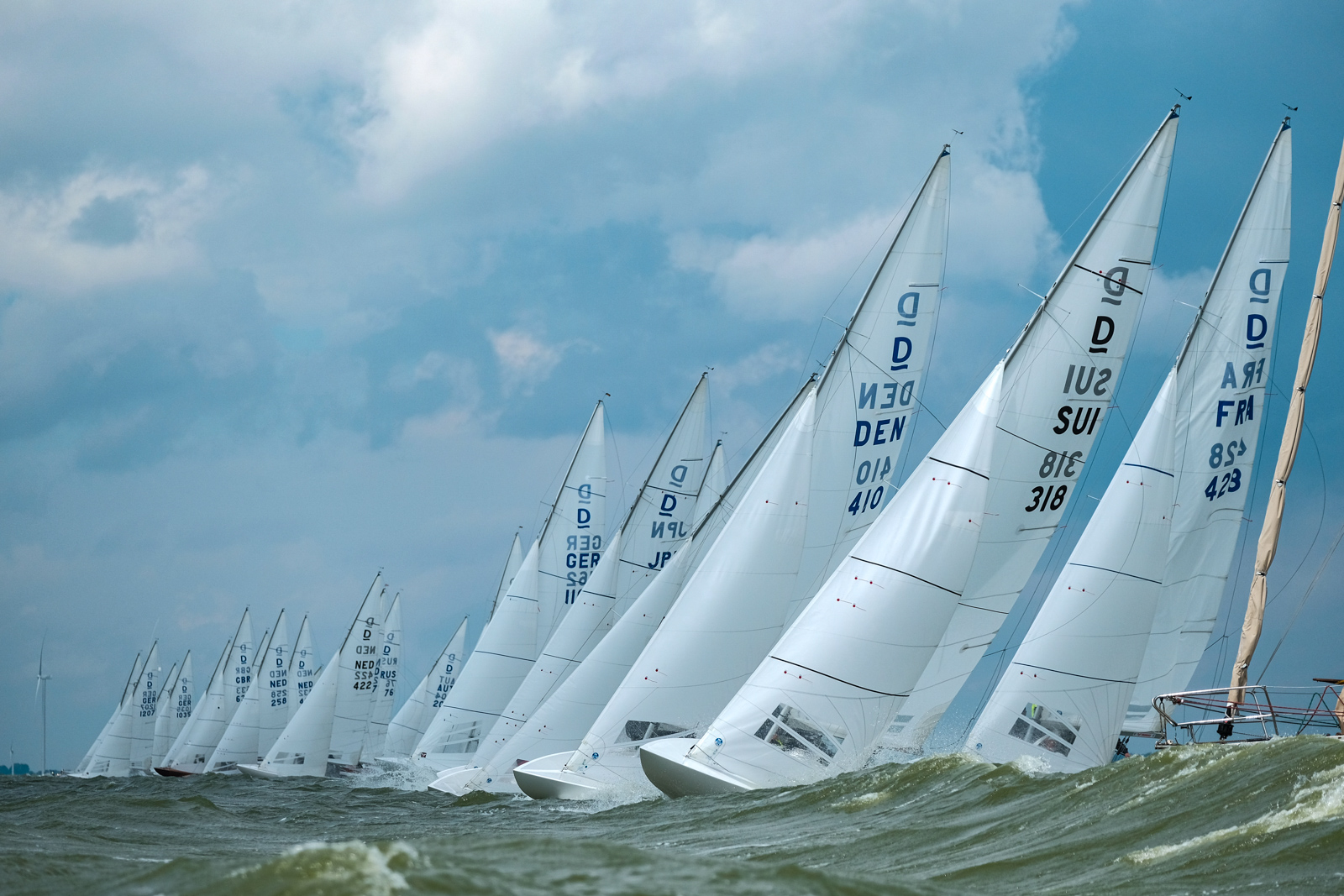 13 June 2019 – Medemblik, Netherlands – The fifth and penultimate race of the Yanmar Dragon Gold Cup 2019 was yet another heavy airs humdinger. With 18-22 knots average and gusts up to 27 knots from the south-south-west, plus a punishing short chop, it was seat of the pants stuff for even the most experienced crews. Britain's Ron James, a stalwart of the International Dragon circuit, crewed this week by Nigel Young of North Sails Ireland and Ian Turnbull, summed the day up succinctly saying, “I don't think I've ever been as fast in a Dragon before, it really was pretty extreme.”

Although strong the wind was relatively stable in direction and the race committee was able to get the fleet away cleanly at only the second time of asking. The five leg windward leeward course was the longest of the regatta so far with an individual leg length of 2.6 miles, and by the end of it the entire fleet was physically and mentally drained. At the first mark Germany's Stefan Link headed the fleet by a whisker from the closely bunched pack led by Russia's Evgenii Braslavets with Peter Gilmour sailing for Japan third, Sweden's Martin Pålsson fourth, regatta leader Pedro Andrade of Portugal fifth and Britain's Grant Gordon sixth.

There were some big gusts on the first run and a number of boats, including several of the top crews, found themselves unexpectedly pirouetting into spectacular broaches and even an impressive Chinese gybe. Gordon was steady as a rock through and gained sufficient ground that at the first leeward gate he was able to snatch the lead which he then successful defended to the finish. After racing he explained, “We were happy with the race today and I'm very happy with how the guys worked, the boat is going fast. We were fortunate at the first bottom mark rounding to get a jump on Evgenii Braslavets and Stefan Link and we managed just to sneak through and led from there.” Following Gordon across the finish line were Braslavets, Frenchman Gery Trentesaux, Andrade, Gilmour, Pålsson and Link.

In the overall standings and with just one race remaining to sail, today's fourth place puts Pedro Andrade into a ten point lead over nearest rival Pieter Heerema who finished the race in tenth. Peter Gilmour's fifth moves him up two places into third, five points behind Heerema. Anatoly Loginov finished the race in thirteenth, which was sufficient for him to hold onto fourth overall, while Grant Gordon's win jumped him up two places into fifth. Overnight third placed Dmitry Samokhin had a tricky day ending up nineteenth, and drops from third to sixth, nine points behind Andrade. Whilst Andrade's lead is comfortable this is a no discard regatta and so anything could still happen with tomorrow's final race, which gets underway at the earlier time of 11.00 and for which there is a 14.30 latest start time.

Martin Pålsson was the top performing Corinthian sailor of the day but fellow Corinthian's Poul-Richard Hoj-Jensen and Jan Bakker were close behind him and so there are no changes on the Corinthian leader board with Hoj-Jensen first, Pålsson second and Bakker third going into the final race.

Alongside the individual competition the Dragon Gold Cup also features a National team competition for the Nations Cup Trophy. The first three boats to finish in race one of the event form the team for each nation and their cumulative scores from each race then decide the winning team. Going into the final race this year's Nations Cup competition is being led by the British Team of Grant Gordon, Poul Richard Hoj-Jensen and Gavia Wilkinson-Cox with 214 points. In second is the Russian Team of Dmitry Samokhin, Anatoly Loginov and Igor Goikhberg with 220 points, and third is the home Netherlands Team of Pieter Heerema, Charlotte ten Wolde and John den Engelsman on 256 points.

After racing the crews came together at the pretty harbour side regatta village for a delightful Dutch Party supported by Van Omme & De Groot Project Development with live music and delicious food courtesy of the famous Music Cafe Brakeboer. The evening also featured a Gold Cup Tombola in which competitors and event volunteers found themselves winning some 10,000 Euros worth of prizes. These included a Fritz Sails jib, a Tacktick and Dock Fenders from Doomernick Yachts, a fabulous four day coaching clinic including boat in Portugal with Pedro Andrade's 8th Dimension Racing for a Corinthian crew, Pig & Hen hand made nautical bracelets, a Yanmar stand-up paddle board and a host of other goodies.

The organisers also took the opportunity to announce that at Wednesday night's Happy Hour party some Euro 1500 had been raised through contributions by event sponsor Yanmar, the Dutch Dragon Association and the Gold Cup sailors for the event's official charity INLOOPHUIS of Medemblik, which offers coaching and a warm welcome for cancer patients and people with mental issues like burn out or anorexia. A number of INLOOPHUIS's clients had attended the Happy Hour party where they'd joined the sailors in singing and dancing to the ‘t Scheepstuygh’ Shanty Singers of Schagen.

The regatta will conclude tomorrow, Friday 14 June with a sixth and final race and the Yanmar Dragon Gold Cup Prize Giving, which will take place at the Medemblik Regatta Centre.