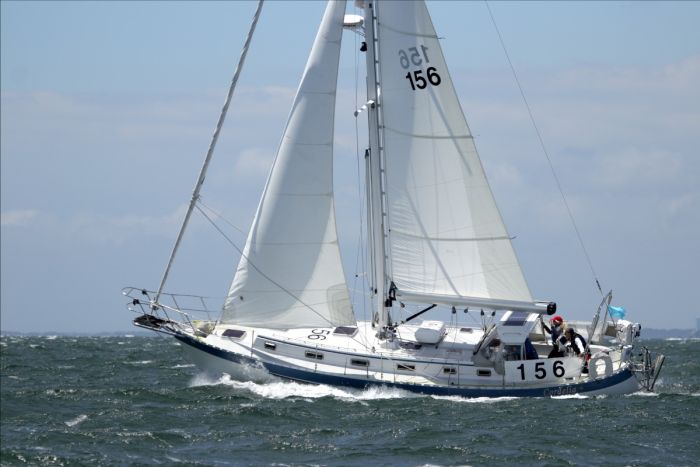 Cordelia is skippered by Roy Greenwald of Marion. Photo by Fran Grenon

Finishers are not expected for at least another 20 hours. Estimated time of arrival off St David’s Lighthouse is 0 ‘dark’ 0300 or so.

Kiwi Spirit, designed originally for Dr .Stanley Paris' single-handed circumnavigation, was sailing at 6.6 kts steering a course of 144º. She's sailed by a Riley family crew with 18-year old Jo Riley as the skipper.

Eugene Berardi’s MachBuster, a Little Harbor 70, has moved up into second place for line honors poised to strike some 20 nautical miles behind the leader. At 0730 she was doing 7.4 kts steering 158º. MachBuster will push the Riley's boat hard from behind as winds lighten on the leader as the day develops.

According to 'Predict Wind', one of the data layers on YB Tracking, Kiwi Spirit and the front of the fleet had a southerly breeze at about 10 kts. After being well to the West, they were tracking just east of the original rhumb line from Buzzards Bay to Bermuda’s Isles. The wind shift is in control.

Selkie, the Morris 32 which was winner overall in 2017, was near the back of the fleet (the second smallest boat this year), 250 nautical miles from Bermuda. She was sailing briskly at 7.4 kts in 14 kts of SSW wind. By mid-day Monday, winds for the fleet are expected to swing back to the southwest, but only in the 10 kt range.

Abigail, Robert Buck’s Aquidneck 52 from Marion MA, was some 20 miles back and a little further west than Kiwi Spirit. She was sailing at 7.3 steering 160º to Bermuda. Abigail is still holding on as the predicted leader of Class A… at this time, according to the predicted data on the YB Tracking.

Monday’s estimated leader in Class B was still the US Naval Academy's Gallant, a Pearson Composite Navy 44 skippered by Christian Hoffman. She was doing 7.9 kts steering 151º

Dauntless— a double-handed Sabre 425 is the new predicted leader In Class C. She's sailed by Matthew Breuer (designated skipper) with Paul Kuechler both of Boston MA. They were making 7.4 kts at 152º. Their wind was around 14 kts at 202º

Cordelia, still the leader of Class D on Monday morning, had 200 miles left to Bermuda. She was making 7.4 kts steering 152º. Cordeliais skippered by Roy Greenwald of Marion.

The classic schooner Tabor Boy from Tabor Academy in Marion MA continues as the sole competitor in the Classic Division. They were sailing at 7.5 kts steering 158º. Wind near them was 11kts at 200º.

This morning the boats were sailing into the north part of Bermuda ‘parking lot’ area where nothing good can happen, fast. This is an area some 50 nautical miles from Bermuda that extends all the way to the finish. The island is surrounded by its own tricky currents and tides. It’s well known areas of light patchy winds.