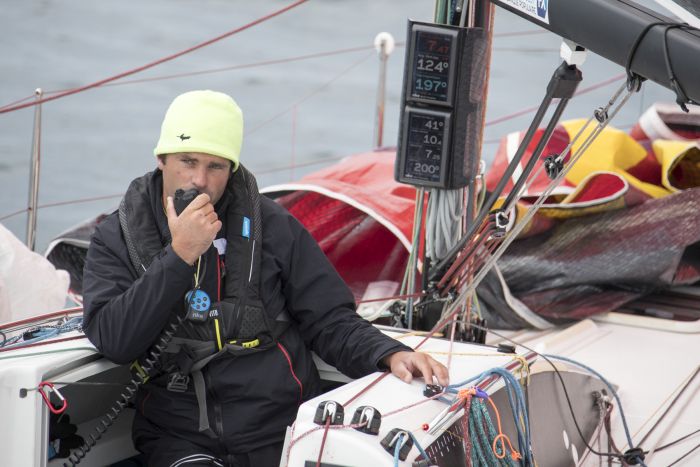 Alexis Loison, (Region Normandie), continues to assert his dominance on the shortened 400-nautical mile third stage of La Solitaire URGO Le Figaro, having led the fleet for much of the last 48 hours.

Along with Gildas Mahe, (Breizh Cola-Equi-Thé), and Anthony Marchand, (Groupe Royer-Populaire Secours), the trio have earned themselves an incredible buffer of 52 miles over the rest of the fleet, after having escaped through a key tidal gate off the north eastern tip of the Channel Islands, which so many others fell foul of and described it as ‘hellish’ and ‘disastrous.’ (You can watch an incredible video of the fleet battling on the passage past Alderney here (https://www.youtube.com/watch?time_continue=1&v=NnrcolnSQUY).

The cumulative fatigue of three mentally and physically gruelling stages will be setting in more than ever for the solo skippers, but one man who will be getting very little rest is the current La Solitaire URGO Le Figaro overall leader Yoann Richomme, (Hellowork-Groupe Telegramme).

At 1435BST today, Richomme was in 16th place, having just rounded the Hand Deeps mark by Eddystone Lighthouse approximately 10 hours and 20 minutes behind leader Loison. For Richomme, who came into Stage 3 with a 10 hour, 31-minute advantage over Loison, he is hanging on to his overall lead by a whisker. Having diminished to just 11 minutes, that margin is looking increasingly fragile and eyes will now be on the tidal gate at Ushant. The overall race lead could be determined by how quick the final miles to the finish are which could yet turn things on its head.

Originally from Cherbourg, Loison has been a professional skipper since 2006 – the same year he first entered La Solitaire at 21-years-old. Since then he has competed in the annual solo, multi-stage race an incredible 13 times, including his one career leg win in 2014 when the fleet raced to Plymouth, UK.

Speaking this afternoon as he looks ahead to the remaining 88 miles of this leg, Loison said: “We’re advancing gently towards Ushant. I’m not surprised they shortened the course. There is still the sail around Ushant, which isn’t going to be easy. I think we’ll be in amongst the rocks at some point. I would have liked to be out in front alone, but now I have a couple of friends close to me. It’s not bad, as we can see what the others are doing and adapt.”

Last year, Loison worked with one of those close friends, Marchard, on a two boat programme. Talking earlier today, Marchand, who was second overall in last years La Solitaire and won the first and last legs, commented: “We have our little battle between us three, the goal is to try to catch up and pass Alexis. I will try to position myself well, choose the tactics correctly and after that, we will see once the finish line is passed. I try not to think too much about it, even if it is in the corner of my mind. What is certain is that it is nice to recover and erase the hours lost stupidly on the first stage.”

The rest of the fleet are currently bunched into two fairly tight groups. A split at the TSS exclusion zone at Casquets off the Cherbourg peninsula late last night has paid dividends for those who favoured the southern route. Amongst them was Martin Le Pape, (Skipper Macif 2017), who is currently in fourth place and was the first of the chasing pack to round Hand Deeps pursued by three times overall leader Michel Desjoyeaux (Lumibird) who is certainly strengthening his overall challenge.

In touch with the leading chase group is Irishman Tom Dolan, (Smurfit Kappa), who by 1500BST this afternoon, had worked his way up from 33rd place last night to eighth. Not far behind in 13th is Brit Will Harris, (Hive Energy) and both are now enjoying the relative respite of the channel with less than 150 miles to the finish.