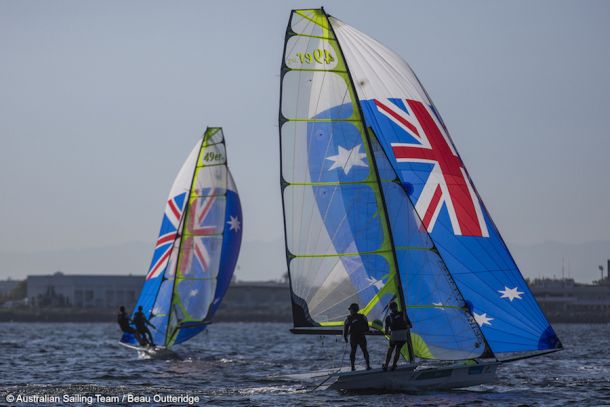 Outteridge and Jensen in the 49er. Photo AST/Beau Outteridge.

Australian Sailing and Yachting New Zealand have signed a joint commitment to attend major regattas on both sides of the Tasman for the next three years, strengthening existing events by generating international quality racing.

The agreement with the working title of ‘The Tasman Project’, will have representation from the New Zealand Sailing Team at Sail Melbourne in late November and Sail Sydney in December as well as the lead-in event, the Sail Sydney Coach-led Regatta.  In return, Australia’s Olympic class sailors will compete in the Oceanbridge New Zealand Sailing Regatta in February.  These regattas also host youth and aspiring Olympic class sailors and have a strong coaching element.

Both countries have impressive records in Olympic class sailing with each winning four medals at last year’s Rio Olympics, the highest number of any competing nation in sailing.

Australian Sailing Chief Executive Officer John Lee is excited at the establishment of the new partnership saying, “This is a great opportunity for Australian Sailing and Yachting New Zealand to work together to create stronger competitions.

“To allow the sailors from both countries to have guaranteed international standard racing at home each year will be a huge benefit in the development of our athletes and squads.   We will also encourage sailors from neighbouring countries to take part and we expect that our friends in the northern hemisphere will see the benefit to taking a summer break in Australia and New Zealand to compete against the best,” John added.

Although rivals, New Zealand and Australia have a history of working together with many crews helping each other as training partners and ‘The Tasman Project’ is expected to strengthen those ties and help both countries succeed internationally.

“The reason for creating this agreement is, in part, due to the prohibitive costs of attending European and World Cup regattas,” Yachting New Zealand Chief Executive David Abercrombie said. “The idea is to create quality coaching and regatta opportunities in this part of the world during a time of the year when the sailing is best here.  This year’s Oceanbridge NZL Sailing Regatta saw sailors from seven countries travel to compete and we think that number can grow.”