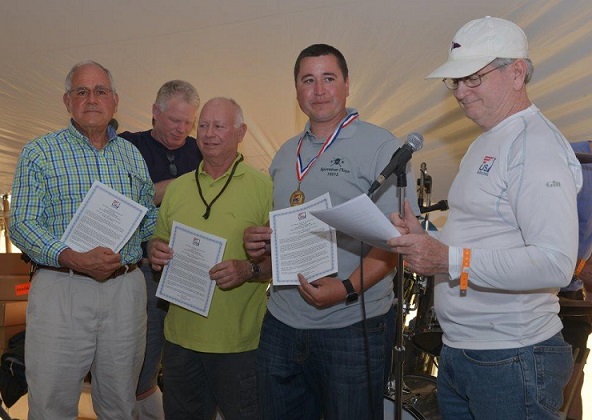 From left to right: Duane Rose

PORTSMOUTH, R.I. (June 13, 2017) – The US Sailing Safety at Sea Committee awarded the Arthur B. Hanson Rescue Medals to a competing Lightning sailboat and two mark-set boats at the 2016 Ford Yacht Club Regatta for the rescue of two Lightning sailors, and the recovery and the attempted resuscitation of the third Lightning sailor.

US Sailing Treasurer Steven Freitas made the presentation during the Bayview Yacht Club’s Bayview One-Design Regatta in Detroit, Mich. on June 3, 2017 during the daily prize awards.

On August 21, 2016, the Ford Yacht Club Lightning Regatta, held in Grosse Ile, Mich., experienced wind gusts up to 30 mph and a temperature high of 78 degrees. Emilia capsized momentarily, re-righted and rounded-up; but the boat flipped over again, putting skipper Michael Read and fellow crew members David Sakowicz and Roy Salisbury into the water.

Aboard a nearby mark-set boat, Dick Synowiec and Matt Jablonski witnessed the accident, motored over, and were told by Sakowicz and Reed that Salisbury couldn’t be found. Synowiec and Jablonski made a Mayday call on the radio and then lifted the mainsail, having to cut the spinnaker away to reach Salisbury who had been trapped with one arm in the port stays and the other arm in the starboard stays with his PFD inflated. They freed the unconscious Salisbury from the rigging and attempted to lift him onboard.

Equipped with a swim platform, the second mark-set boat, Polar Bear, arrived on the scene with Ted and Denise Wagner onboard. Denise held the two powerboats together while Ted, Synowiec and Jablonski muscled Salisbury onto Polar Bear. Polar Bear sped to shore to Huron Metro Park and waived down two police officers. Police took over and performed CPR, including the use of a defibrillator. The ambulance arrived and rushed Salisbury to the hospital. Salisbury did not survive.

Sakowicz shook violently from hypothermia, and Spinnaker Ninja put a foul weather jacket over him to hold in the remaining heat. Others came to recover the abandoned Emilia to clear the waterway of a navigational hazard.

US Sailing is honored to award the Arthur B. Hanson Rescue Medal to Dick Synowieck and Matt Jablonski for locating and recovering their fellow mariners, as well as providing CPR in very trying circumstances.

US Sailing is pleased to award the Arthur B. Hanson Rescue Medal to Ted and Denise Wagner for recovering their fellow mariner, as well as providing CPR and bringing the victim to professional medical services in very trying circumstances.

The Arthur B. Hanson Rescue Medal is awarded to any person who rescues or endeavors to rescue any other person from drowning, shipwreck, or other perils at sea within the territorial waters of the United States, or as part of a sailboat race or voyage that originated or stopped in the U.S. The medal was established in 1990 by friends of the late Mr. Hanson, an ocean-racing sailor from the Chesapeake Bay, with the purpose of recognizing significant accomplishments in seamanship and collecting case studies of rescues for analysis by the Safety at Sea Committee of US Sailing for use in educational and training programs. Any individual or organization may submit a nomination for a Hanson Rescue Medal.