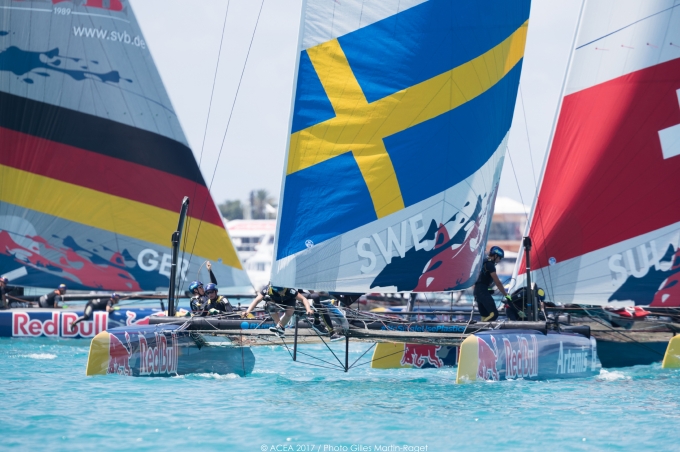 Day Two of the Pool A Qualifiers in the Red Bull Youth America’s Cup once again belonged to Sweden’s Artemis Youth Racing as they topped the tables with two wins.

Heading into the day the Swedish team once again grabbed the headlines with two victories from day two’s three races to reaffirm their position at the top of the standings, qualifying comfortably with 55 points.

Joining them in the final three qualification spots from Pool A are SVB Team Germany, Switzerland’s Team Tilt and Team France Jeune.

The result today means that Youth Vikings Denmark and Kaijin Team Japan from Pool A join Next Generation USA and Austria’s Candidate Sailing Team from Pool B in suffering elimination from the 2017 Red Bull Youth America’s Cup.

Red Bull Youth America’s Cup Sport Directors Roman Hagara and Hans Peter Steinacher gave their thoughts on the latest day of competition, and what lies ahead in the Finals on 20th and 21st June. Hagara started, saying, “The teams were faced with yet more light winds today, but they dealt with the conditions well and we managed to complete the race program today.

“It’s tough work racing in these conditions – it’s hot, there’s little breeze and you’re having to work incredibly hard on the racecourse to maximise every opportunity that comes your way.

“Now we know which teams will be in the Finals next week, and I think we’re in for a couple of days of thrilling racing. Hopefully we have some better winds, but they’ll go out and deal with whatever is in front of them, and I know that whichever team comes out on top, they’ll deserve the spotlight that will be shining upon them.”

Hans Peter Steinacher added, “I’ve been extremely impressed with how all the teams have come into this regatta. There are a few teams emerging as serious contenders, but the margins are so fine, there’s really so little to choose between them, I don’t think anyone can predict who will come out on top at the end of the series.

“One thing we can predict for sure is how the Finals on Tuesday and Wednesday will captivate Bermuda. TeamBDA did so well to get into the Finals, and now it’s all anyone on the island wants to talk about. The guys in that team are doing an incredible job, and now they also have to deal with the hopes and dreams of their entire home country.

“Having seen them in action, both on and off the water, I don’t think for a second that will faze them, in fact I think it’ll help them as the support is going to be incredible.”

Pool A Race 4
Building on their impressive displays on day one of Pool A qualifying, Gustav Petterson’s Artemis Youth Racing solidified their position as Pool A leaders with a third overall victory in the qualifying stages to kick off the day in perfect fashion.

It was Max Kohlhoff’s SVB Team Germany who had led the way for the majority of the race, but a late final mark surge from the Swedish team ultimately saw them snatch victory ahead of the Germans.

Behind that scrap, a close-fought battle between the four other Pool A teams saw an improved performance from Youth Vikings Denmark help them clinch a morale-boosting third place finish, ahead of Team France Jeune, Switzerland’s Team Tilt and Kaijin Team Japan.

It proved a much closer battle for the next three places, with Sebastian Schneiter’s Team Tilt securing second place, ahead of SVB Team Germany and Youth Vikings Denmark.

Further back, Ibuki Koizumi’s Kaijin Team Japan crossed the finish line in fifth place while somewhat surprisingly, Team France Jeune, who struggled throughout the race, were forced to settle for sixth place.

The results after race five meant that Artemis Youth Racing and SVB Team Germany had secured their places in the Red Bull Youth America’s Cup Final. Their progression meant that there were only two spaces left in the Finals for the remaining four teams to fight for ahead of the sixth and final Pool A Qualifiers race.

Pool A Race 6
The final race of the Pool A Qualifiers saw Switzerland’s Team Tilt come out on top in a dramatic late tussle with Youth Vikings Denmark, clinching a vital victory which sealed their progression into the Red Bull Youth America’s Cup Finals.

Behind them, Team France Jeune also confirmed their qualification with a third place finish, ahead of Artemis Youth Racing and SVB Team German, who had both already sealed their places in the Finals ahead of Race six.