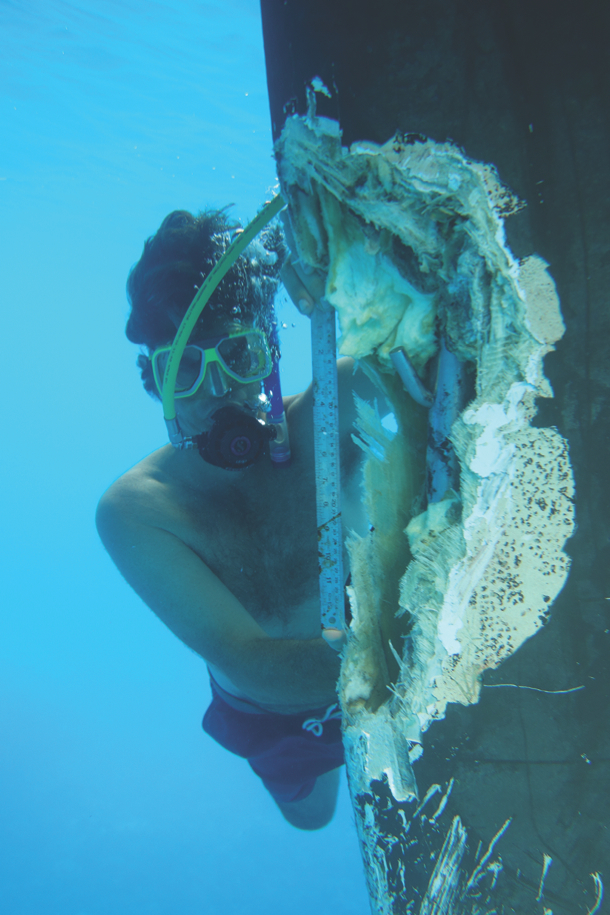 When your boat goes up on a reef in a remote atoll the last thing you expect is your VHF call to be answered at four o’clock in the morning.

Off Ile Boddam there is no beautiful soft sand to anchor in a sensible depth. That is the preserve of the shallows and shoreline.

Part of the remote British Indian Ocean Territory (BIOT) and found 300 nautical miles south of the Maldives, this beautiful deserted island contains the ruins of a church, warehouse, prison and other buildings. All reminders of a small population forcibly evicted in the 60s by the British government of the time, to Mauritius and the Seychelles.

The jungle has taken over with casuarinas and prolific palms swaying in the breeze. Here coconut crabs are king. The nearest habitation is over 100nm away at Diego Garcia, a prohibited area to all but the military.

After two failed attempts at dropping the hook of our 48ft Wauquiez on a bedrock of coral when we dragged each time, we decided to pick up the last available mooring which had recently been used by another similar sized yacht in winds of up to 40 knots.

The ropes attached to the buoy were not in good condition so we dived three metres below the surface and found a ship’s hawser at least four inches in diameter, through which we passed two of our substantial mooring lines. In turn the hawser was secured to a coral head (bommie) 12m down, too deep for free-diving. With the engine in reverse and revved to 2500rpm, equivalent to over 30 knots of wind, the mooring held.

The weather was mixed for the next couple of days, one moment calm, the next squally with torrential rain and strong winds. Despite assurances from others and doing everything we could to ensure our safety, we were still concerned about the mooring, normally a ‘no-no’ for us in all but locations where we know they are reliable.

Sleeping fitfully in our forward cabin because the wind had increased, we were suddenly aware of a change of boat movement: a sideways slide accompanied by a slight grinding.

Fearing the worst we were up in a flash. Before the anchor alarm had had time to sound, we were in the cockpit with the engine on in pouring rain. It was 0400 and blowing about 35 knots.

Within moments we were on a coral reef. Initially we were able to move off, but did not know which way to turn to reach the safety of deeper water in the pitch black. The keel came to rest on coral, on a falling tide. We were helpless and no longer in control.

A myriad of questions went through our minds. Could we and our floating home be saved? What further damage could occur? How could anything be done on this remote atoll? Would we finish up like the wrecked and abandoned catamaran on the other side of the atoll?

How did we escape?

Our immediate call for help on the VHF was answered by two yachts, then dinghies magically appeared out of the darkness. As dawn broke Cruiser One calmly took control and secured us with two kedge anchors.

We were surrounded by coral and there was no clear escape route. Our brains turned to treacle, but we were more than willing to pull ropes on command.

The support team quickly grew to six, with dinghies, snorkel and dive gear. An initial visual underwater inspection showed that the rudder had several large gouges in it and the propeller shaft was bent at the taper for the propeller. It later emerged the P bracket was leaking slightly. Inserting rubber tyres taken from the ruined jetty and timber where the hull could have been exposed to the grinding of coral, saved the boat from further damage.

At low water the angle of heel was about 40 degrees. High water was at 1400 and during the morning the yacht refloated in very shallow water. An underwater inspection of the reefs was made by Cruiser Two to plan a careful route out through numerous bommies.

The weather was not good: rain, 15 to 20 knots of wind, overcast with no sunlight. It was difficult to detect the reefs and because the propeller shaft was damaged we could not use the engine.

Using a system of four kedge anchors with two dinghies lashed alongside, port and starboard, for motive power, we slowly progressed through the bommies. We were warned it was unlikely we would reach safety without touching another reef.

Cruiser 1 tirelessly lifted and then strategically placed each anchor from a dinghy by hand, guided by the team in the water. The deck team pulled in and eased the ropes using the winches and anchor windlass.

By 1600 we finally dropped the anchor in 12 metres on coral bedrock. This time it held. The sun was shining.

We heaved a huge sigh of relief.

Repairs in the middle of nowhere

In the meantime, Cruiser Three, one of the group who just happens to be a naval architect, had arranged via email for a friend to visit Wauquiez in France to obtain plans of the rudder.

He needed a calculation of the weight required on the bow to lift the stern high enough so that when the rudder was released, sea water would not ingress through the rudder tube. Back by email came detailed drawings of the aft section of the yacht: 800 kilograms ballast was required.

The first step was to load our bow down with sea water from our deck wash poured into old fuel containers that were stored in the ‘yacht club’ ashore. Then all heavy items that could be moved from the stern were transferred to the bow. Toolkits and spares from the stern cabin quickly found a new home forward.

The difference in balance was remarkable, the bow dropped by nine inches and the stern lifted by eight.

With ropes controlling its descent, the rudder was successfully released from within the lazarette, lowered and supported by flotation bags and fenders and manoeuvred to a dinghy for towing ashore.

Once there, Cruiser 3 took over organising a portable genset, angle grinders and sanders to cut away all the damaged GRP. After a good dousing with buckets of fresh water from the nearby well it was left to dry overnight. The next day, repairs began.

Being a naval architect and having modified and improved his own catamaran, Cruiser 3 was expert in working with GRP and had stored copious quantities of resin and hardener plus the different types of layup material. He was also keen to teach all those who were interested.

The rudder should have been filled with foam but, upon exposure, we found it was barely half full and shrivelled.

The Southampton boatyard that repaired it in 2008 did a poor job, weakening the whole structure.

Cruisers 1, 2 and 3 found material from their own boats to use as stuffing, but there was still a shortfall. Necessity being the mother of invention, they had a brainwave. From the masses of coconuts lying around, copra was stripped, mixed with resin and inserted into
the voids.

Next day Cruiser 3 gave another masterclass, applying different layers of GRP to obtain maximum strength, finally covering it with silk for a smooth resin finish. The weather then turned against us with a tropical downpour and a constant 15 to 20 knots of wind.

But nothing fazed Cruiser 3 and Cruiser 1. As if by magic, a very large plastic tarpaulin appeared from another boat, which was secured between the palm trees to provide more than adequate protection for work to continue.

To us it was almost as if the whole exercise, from the stranding of our yacht to our escape and repair, had been staged for a TV program. We found it hard to believe that the expertise and materials could exist on a deserted atoll in the middle of the Indian Ocean.

Sanding back the excess resin around the repair, some additional cutting and minor repairs of the trailing edge of the rudder were the final steps. Once the resin had set, it was time for a coat of antifoul and a celebratory ‘pot luck’ barbecue on an open fire at the improvised ‘yacht club’.

The following morning the rudder was strapped and slung between two dinghies for the return journey to our yacht. We now had a floating rudder so a significant weight of anchor chain was attached to sink it then manoeuvre it so the stock could be inserted into the rudder bearings and finally secured in place.

All the weight up forward was removed and items restowed. Slowly we became shipshape again. Plans then began to take shape to manoeuvre us out of the atoll, enabling us to sail the 1,000nm to the Seychelles where complete repairs could take place.

Whilst every yacht in the anchorage helped in some way and we are indebted to them for their support, our special thanks go to cruising couples 1 and 3. Without their help and expertise, the recovery would have had an entirely different outcome.

We cannot stress strongly enough how overwhelmed we are by the unparalleled camaraderie, team spirit, generosity, friendship and thoughtfulness of our fellow yachties. This is a small part of the international cruising community coming together and showing itself off at its best. Not including us, there were six other boats in the ‘anchorage’, the closest roughly 200m and the furthest about 500m away.

It is also a tribute to the high build standards of Wauquiez that the yacht remains structurally sound.

Moving on to the Seychelles

Using the engine with a bent propeller shaft was clearly impossible without severely damaging or breaking the P bracket and stuffing box. Therefore we were still totally reliant on outside help to get us safely out of the atoll when
the time came for our downwind passage to the Seychelles.

We and the other five boats waited for the right weather window to give us at least five days of steady winds. Departures were staggered so we sailed in company with another two yachts, yacht 1 and yacht 2, the others following on a few days later.

Getting out of the atoll was unexpectedly straightforward. We left in good light, a dinghy strapped either side to provide propulsion and manoeuvrability once the anchor was up.

We were soon sailing gently across the lagoon, avoiding coral heads and being guided out through the pass. Once outside we bade farewell to our escorts and set off on what was to be a fast and challenging 1,000 mile passage to Victoria in the Seychelles. Fast because it took just seven days and challenging because we encountered frequent squalls, wind shifts and uncomfortable seas.

Reporting our progress and position twice daily on a scheduled frequency and time via the SSB was comforting.
As was the weather forecasting advice we received by a cruiser who had access to the latest satellite pictures. Otherwise we were in regular VHF contact with the two yachts ahead of us.

Anchoring in the quarantine area off Port Victoria, we felt safer than we had done in weeks.