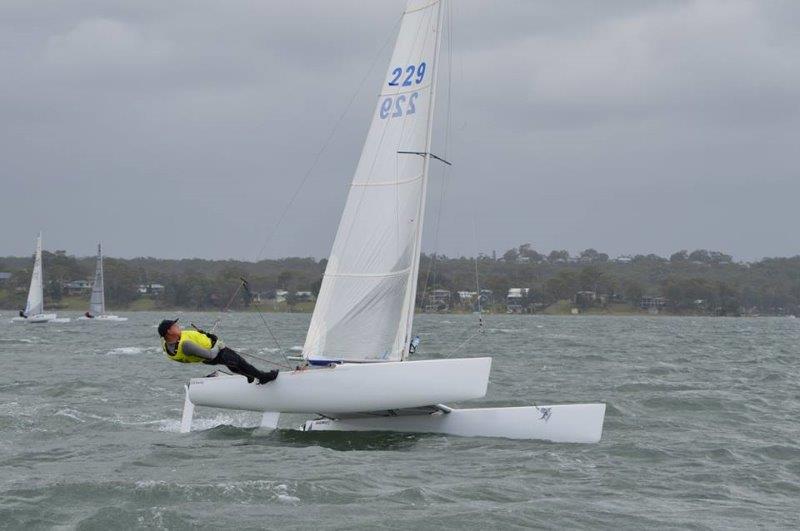 The SailingKit.com.au TCAA 2017/18 Nationals Titles held at Mannering Park Amateur Sailing Club in NSW proved to be a huge success, with racing coming down to the final day in all three fleets. Thirty-eight boats made the trek to the beautiful stretch of Lake Macquarie; 29 x Cat Rigged, 3 x Sloop Rigged and 6 x 5.7’s.

After an unorthodox start to the regatta, in the form of having the lay-day before the first heat thanks to the unfortunate timing of NYE, we had four days of solid racing and we managed to get in all 12 races. A massive thanks must go to Mick Forbes (RO) and Terrie Blackford (Regatta Manager) and all the team at MPASC for their hard work in getting the races in under some tricky conditions and for their wonderful hospitality throughout. We had a big mixture of conditions ranging from very light and shifty, to heats sailed just under the upper wind limit (nothing like submarining the whole way down each run leg!). In the end, we were able to crown three new National Champions!

In the 29 strong Cat Rigged fleet, the racing was fantastic. If you have a look through the results, you will see some big gains and big loses from all across the fleet. Overall, we had five different heat winners which is a testament to just how competitive the fleet was. The Yellow leader’s jersey looked to be cursed throughout the event, but Dave Parker put it to rest on the final day with some stunning sailing, claiming his maiden National Title. In second place was Will Richards who is new to the class and is one to watch in the future, followed by Zac Breaden in 3rd place who was easily the most consistent throughout the event. Rounding out the top 5 was Ant Richards in 4th and Sam Breaden in 5th.

This year, the Cat Rigged fleet trialled a Masters trophy for sailors 50 years and over. It was extremely successful. Based on a handicap system (12 seconds for each year over 50), the racing was really tight and came down to the last day as well. Colin Gow came away with the chocolates and I must say his acceptance speech was really heart felt and brilliant! Lachie Cameron came in 2nd and Mick Colecliffe rounded out the podium. A big thanks to Mark Colecliffe for getting this off the ground and no doubt it will become a permanent fixture at every upcoming Nationals.

In the Sloops this year, unfortunately the numbers were down. However, the racing was certainly not ho-hum. In fact, quite the opposite! It came down to the final day and the eventual result came down to a countback, with father and daughter combination Steve and Evelyn Floyd taking out the win. Nick and Bailey Hord came in 2nd with the brother’s White coming in 3rd after some issues with breakages.

In the 5.7’s, there were six highly competitive crew combinations with all boats carrying kites. Again, racing was tight with the top 3 all in contention on the final day. This year it was Brad and Matt Carver’s turn to get the win without needing to sail the final race. As with Colin, Brad’s acceptance speech will be remembered for a long time as well! Very inspirational. In 2nd place was Greg Caines and Anthony Ducat, with an ever improving Paul Lindemann and Wayne Hale coming home in 3rd place after a couple of bullets throughout the event.

This year we had SailingKit.com.au as our class sponsor and as I’ve mentioned before, I can personally attest to their awesome Rooster gear! As part of their sponsorship, they provide prizes not necessarily for the winners, but for people/acts of note. This year we awarded; Evelyn Floyd, Bailey Hord and Kyle Micaleff (up and coming juniors), Mick McGuire and Tom Luitjes (most travelled – from S.A. to QLD to NSW then back to S.A.!), Ash Johnson and Rob Fowler (for having a red hot crack despite breakages), Brad Carver (Sportsmanship award – for basically assembling another 5.7 with all the breakages!), Kim Russell (Guts and determination award, who also took out the Steve Kielly junior sailor award) and Colin Gow (Masters winner). A big thanks to SailingKit.com.au who have sponsored all our major TCAA regattas this season.

Finally, a massive thanks to Mark and Mick Colecliffe for all their hard work in the lead up to and during the Nationals. Also to Roellen Gillmore for her work during registration, taking photos and of course helping during the presentation, Rohan Gillmore for all his work with measuring and of course Craig Harden for the fantastic trophies!

Next year we roll onto Portland in country Victoria. If Mannering Park was big, this one will be massive! In the Cat Rigs, there will be at least four if not five or six current or past Nationals Champs sailing, in the Sloops, there’ll definitely be more attending with larger numbers in Vic and SA, and of course the S.A. 5.7 fleet will again be coming across to take back the title. Combined with some sensational family focussed social events and a picturesque location, this is the Nationals you MUST attend!