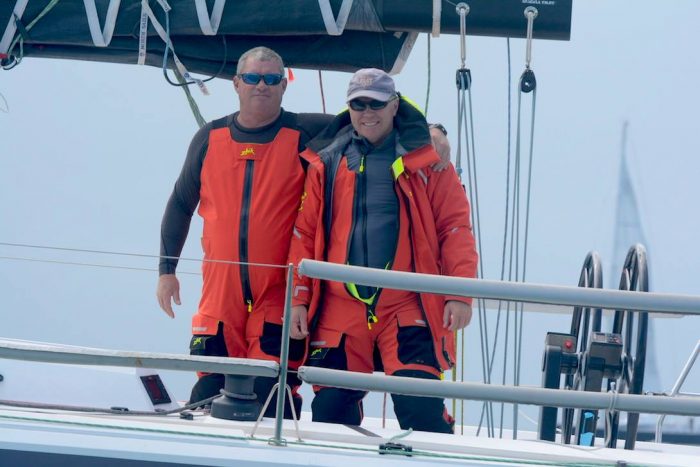 Todd and Dubbo on Kraken.

Following the Notice to Competitors yesterday regarding concerns over cyclone Iris there have been some decisions made by skippers overnight and courses in some cases altered accordingly.

Some competitors such as Allegro have decided to head further east, keeping an eye on things and hopefully getting north of the cyclone. Quite a number, such as Nexba, Maverick and Mr Lucky have turned to find a safe haven. There are others of course in the earlier group, who are clear of the weather to the north and others such as Utopia 2001 and our recently started Chinese Whisper ,who are still a fair way south. They will no doubt keep a close eye on things as they proceed.

It’s not as simple as picking any Port either when it comes to deciding where to shelter. Depending on whether a crew decide to get off the boat or find a safe place to anchor, they will need to choose an official “Port of Entry” such as Southport. That way they can clear customs if they need to.

Following is a list of our 19 competitors and their known status by the Race Director as of the 07:00 schedule this morning.