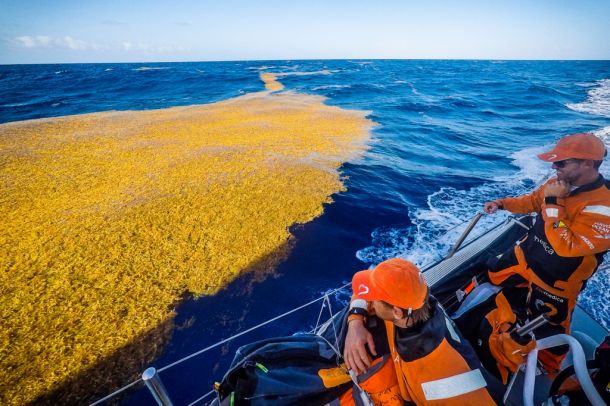 The six crews continued to be closely matched with less than 10 nautical miles (nm) separating the first three and just over 65nm from first to last, but they are now well split laterally and can no longer cover each other’s moves via the onboard Automatic Identification System (AIS).

For Briton Walker, it was seaweed which was the current concern. “We would have had a really good last position report averaging over 20 knots until the last hour when we got so tangled up in seaweed it caused numerous involuntary broaches, lots of attempts at clearing it and in the end we had to do our second back down,” he reported in his latest blog from the boat. “It has been better recently but the problem never really fully goes away. I remember the seaweed being bad in the last race, but not this bad. It is getting quite hard to race through here sensibly.”

Behind him, Caudrelier’s main concern was the forthcoming gybe east of the Caribbean islands, in a more northerly direction, as they attempted to catch the Emirati boat while keeping Team Brunel (Bouwe Bekking/NED), MAPFRE (Xabi Fernández/ESP), Team Alvimedica (Charlie Enright/USA) and Team SCA (Sam Davies/GBR) at bay.

“It doesn’t look like we’ll be heading for the Caribbean,” he wrote in his blog on Thursday night. “Shame as we were well placed to head that way but it’s okay as our good speed is saving us for the moment.”

The Frenchman, 41, admitted he was feeling the pace in a nine-month offshore test of stamina as well as seamanship. “I am feeling tired, or rather, worn out. This is our sixth leg of 20 days and this one has come right after the stressful Southern Ocean leg.

“When a competitor comes up to you on the dock and says ‘this is my last ever Volvo, never again’, while he’s fighting for victory, you know that, he too, is struggling and not even trying to hide it. The end of this race will be won by the last men standing.”

Towards the other end of the fleet, Team Alvimedica continued to bide their time in the hope of a change of fortunes in the race to their home port of Newport.

“We’ll likely sail east of the Caribbean before spearing off into the Atlantic towards Bermuda,” said Onboard Reporter, Amory Ross. “There lies an area of high pressure and light wind that could potentially split the fleet near the mid-Atlantic coastline and it’s as good a chance as we’ll get to try to catch up with the leaders.”

The boats are forecast to arrive at their destination between May 7 and 8. They will have 10 days in Newport for boat maintenance before heading out to Lisbon, Portugal, on May 17 for one final crossing of the Atlantic.

There are then two final legs that will take the fleet to France (Lorient), the Netherlands (The Hague) and Sweden (Gothenburg) before the race reaches its conclusion on June 27.