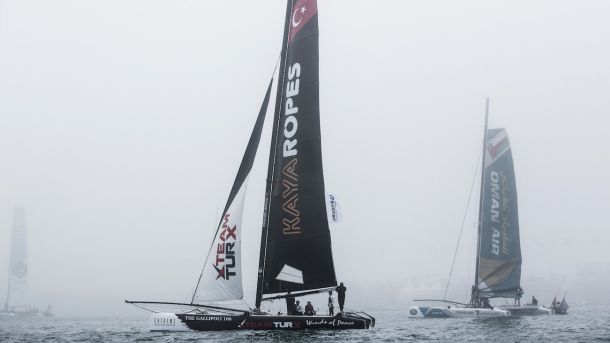 Persistent heavy fog forced the cancellation of racing on day one at the Land Rover Extreme Sailing Series Act 3, Qingdao. It is only fourth time in the nine-year history of the Series that mother nature has forced the organisers to cancel racing, but the first time it has happened due to fog.

Famous for its mixed conditions, this morning’s forecast was for a building five-knot breeze and hazy conditions clearing throughout the day, but the city of Qingdao had other things in mind, as Race Director Phil Lawrence explained: “We were all set up and the teams were going through their practice run when a fogbank rolled in from offshore”.

With visibility quickly falling to 40 meters, Lawrence was forced to make a call: “Racing was impossible and we initiated our fog control plan with the fleet and supporting boats quickly returning to shore. Despite being held for two hours the fog became thicker instead of lifting and racing was abandoned for the day.”

Despite the fog, today was a landmark moment for Extreme Sailing Series, with the skippers press conference kicking off proceedings with the announcement of an exciting new partnership with one of the world’s leading airlines and the Sultanate of Oman’s national carrier – Oman Air.

The partnership with Oman Air sees a full ‘360 activation’ from the airline, supporting not only a competing team, but now as an event supplier. This latest addition to the family of Series partners further strengthens the Extreme Sailing Series position as the leading sponsors funded Stadium Racing circuit.

As Official Airline to the Series Oman Air also took the opportunity to confirm China will be their 49th destination, playing a major role in increasing the number of travellers to the Sultanate of Oman and providing a thriving gateway for business and tourism.

With three full days of racing planned for the national holiday weekend here in China, the forecast is looking promising, but with Qingdao already catching the sailors off guard anything could happen.