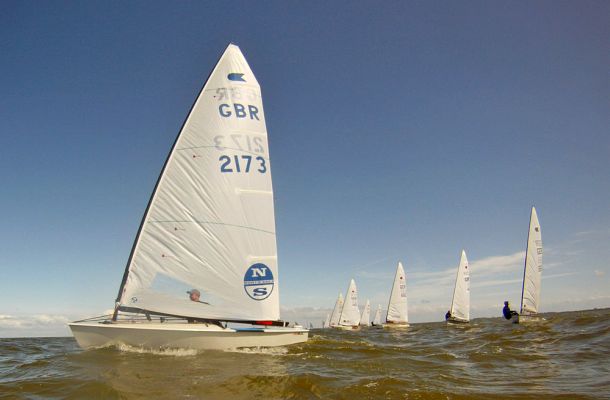 Charlie Cumbley (GBR) made the first day of his first ever international OK Dinghy regatta look easy as he took three straight wins on the opening day of the OK Dinghy Spring Cup in Medemblik, in The Netherlands. Sailed in a shifty 8-14 knots onshore breeze the 45 sailors from eight countries enjoyed a great day's sailing, if a little on the cold side.

All three races got away first time, though race 1 featured five OCS as the bunch at the pin pushed too hard. Cumbley started in the middle of the line and played the shifts well to the first mark to lead round in the first two races. He was pushed hard by both Jim Hunt and Nick Craig. It was slightly more open in the final race as Jørgen Lindhardtsen (DEN), led at the top. However Cumbley rounded sixth and was soon taking places offwind to round the downwind mark in the lead, which he held to the finish. Craig gained a lot on the final beat on the left to ensure Cumbley only won by the narrowest of margins – a couple of boatlengths.

Cumbley said it was anything but easy. “It was absolutely not easy. I came here with no expectations or any idea of the pecking order. I did't know who was slow or quick. So it was nice to be up there and that's the the best I have sailed for a good while. Maybe because I was relishing the new challenge. Because I had no expectation I just tacked on the shifts and sailed my own race. Luckily I had a bit of pace downwind so that got me out of trouble.”

Racing continues until Sunday. Light winds are forecast for Saturday and very strong winds for Sunday, so the fleet should see a little bit of everything.