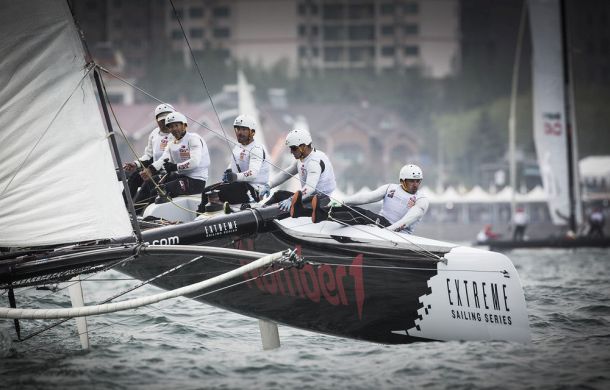 A patchy seven-knot breeze blew across the Chinese racecourse today as the nine international Extreme 40s took to the water in the shadows of the Qingdao skyscrapers at Act 3 of the Extreme Sailing Series. The change in conditions mirrored a change in rank within the fleet, as Team Turx powered by Kaya Ropes stepped up to the mark. Replay today’s racing here.

Taking home a total of 65 points from a possible 80 in the eight races sailed, the Turkish team, co-skippered by Mitch Booth and Edhem Dirvana, today showed what they were capable of. Stepping away from their mid fleet results of the past two Acts, the Turkish team were second on the days leaderboard, with two race wins – their most successful day on the water since they joined the fleet in February – boosting them up the overall Act leaderboard to fifth place. The only team to top the Turkish team’s score line were SAP Extreme Sailing Team, who added 68 points to their tally to remain overnight leaders ahead of tomorrow’s final showdown and putting them on course for their maiden Act win.

Entering the day with a plan, Booth explained: “We thought it was going to be lighter breeze today, so our main tactic was to stay away from everyone as much as possible. Even if it was extra distance we had to sail, we just wanted that clean air, as it can get pretty busy at the top end of the course.”

Good starts, smart tactics and taking full advantage of the favoured right-hand side, the team held an impressive level of consistency throughout the day. Co-skipper Dirvana was visible thrilled with the team’s performance as they crossed the line. “It feels great, we love every minute of sailing here – these boats and being in this fleet is fantastic and to be out here in China representing our country and getting the crowds cheering for us, it’s wonderful. All our hard work is paying off.”

An almost flawless performance by the Danish duo Jes Gram-Hansen and Rasmus Køstner that included three race wins, has put them a clear 23 points ahead of second placed Gazprom Team Russia, currently on 123 points after a day of consistently chipping away at the top half of the pack.

Established teams The Wave, Muscat drop to third overnight on 117 with Red Bull Extreme Sailing Team just one point behind in fourth.

Tomorrow the forecast is set to change again for the final day in China’s Olympic sailing city, with the wind shifting round to the north, and gusts up to 28 knots predicted to pummel the racecourse. Watch the racing live, from 1530 local time at www.extremesailingseries.com as the winners of Act 3 Qingdao are crowned.