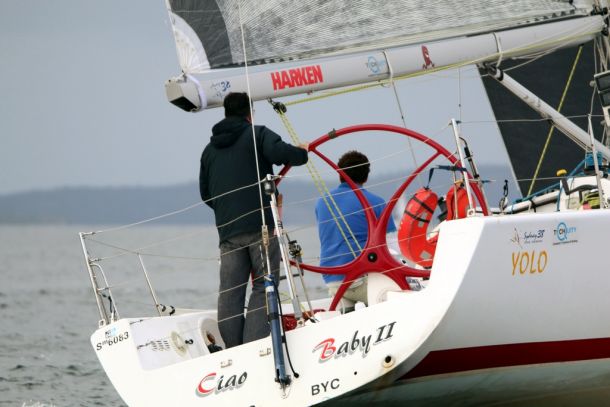 With only two more races to sail, competition is tight for top honours in the Derwent Sailing Squadron/Quantum Autumn Short-Handed Series 2015 being sailed on Hobart River Derwent.

The 52-boat fleet enjoyed a good breeze in mild autumn weather for today’s race four, which produced five new winners in the six divisions and shortened the overall pointscores in each fleet.

A northerly breeze which eased during the morning from 12 to 10 knots enabled DSS race officers to set a largely windward/leeward course between the Tasman Bridge and Nutgrove Beach for the four spinnaker and two non-spinnaker divisions.

The only down note today was a crunching collision between Jory Linscott’s Cole 23 Acacia II and Luke Kiely’s Trick Cyclist in Division 4 which saw Acacia II badly holed in its topsides.

The biggest lead after four races is 15 points held by Rod Chamberlain, sailing Elliott 1, with a series score to date of 2-1-2-3 in Division 4 (spinnaker). Elliott 1, one of RYCT’s newly acquired fleet of Elliott 6s, holds this huge lead from Serenity (Graham Hall) which is one point ahead of Elliott 5 (Dan Woods).