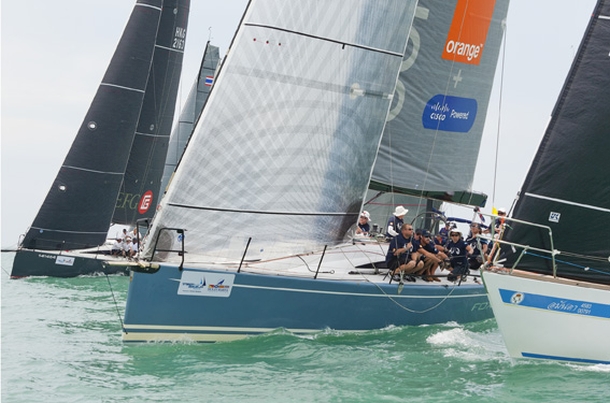 The 2015 Top of the Gulf Regatta came to a close today after four days of exciting racing. The dinghy classes and Thailand Optimist National Championships finished their three-day series yesterday with today the last day of racing for the keelboat and multihull classes, and there was still plenty to play for.

This years Top of the Gulf Regatta Presented by Ocean Marina will go down as one of the toughest yet. Not only were there top international crews and close racing on-the-water, the conditions proved to be some of the most varied, tricky and challenging in the Regatta's history.

Out on the course, Race Officer Denis Thompson AP'd waiting for the wind to fill in and by late morning there was a moderate breeze, enough to get the fleet into sequence. Two races was the plan, and it was delivered for the IRC, one-design Platu and multihull classes, with one longer race preferred for the Cruising class.

Celebrating its 20th milestone this year, the Coronation Cup – launched in 1996 to coincide with the  anniversary of His Majesty the King of Thailand's Coronation date, 5th May 1950 – has grown to become one of the largest one-design racing competitions in the region.

After a slow start to the 2015 series, Kingdom Property (AUS) rallied to put in a string of five wins and take a commanding position at the top heading into the final day. With two races planned for today, a first in Race 1 secured the title for Scott Duncanson and his crew one race early – the first time ever that the title has been defended and the fourth time in total that Scott Duncanson has won the Coronation Cup.

After leading the Platu class at the end of the first day, the Thai team on Le vent 2 struggled in the lighter winds and fell off the pace to finish fifth overall, while the all-Thai female crew – soon heading to the SEA Games in Singapore – on the Platu YRAT, were sailing light with just four crew, and despite the weight disadvantage in the stiffer breeze they managed a commendable ninth out of 13 overall.

In IRC Racing 1 there has been some close competition, disappointing performances by sailors' own account, and one DQ. It was enough to keep everyone on their toes and nothing was certain with the final two races' performances set to decide the final standings. Fully aware of this, it was EFG Mandrake (HKG) fastest out of the blocks to score line honours and the handicap win in Race 1, ahead of Foxy Lady VI (SIN).

Wan Ma Rang (THA), however, got caught out on the first downwind leg of the windward/leeward course and slipped down the scoreboard to finish last in the race.

It wasn't enough to knock them off the podium, however, as they secured third place by a single point margin, while at the top a win in the final race saw Foxy Lady VI, lead by Steve McConaghy, defend their class title and EFG Mandrake – first time competing at the Regatta – finish in second.

A little over 20 seconds separated first and second places in today's first race for IRC Racing 2 with Amanda (SWE), who struggled in yesterday's shifty winds, edging out Iolanthe (AUS) and El Coyote (AUS) on a late surge with a solid third place.

A disappointing sixth place in the final race for Amanda – their worse on the scoreboard – meant they fell off the top spot and finished second overall. A first for Iolanthe saw them take advantage of Amanda's slip-up to win the title by two points with El Coyote finishing third overall.

Being scored with the NHC performance handicap system, Cruising has been a closely fought battle between the Japanese crew on Tai Two (JPN) and the USA team on Nautical Wheeler, and it wash Tai Two who won the title by 0.4 points from Nautical Wheeler with George Foose and his Dream team (USA), scoring a first in the last race, sneaking into third overall.

In 2014, the Ocean Multihull class went down to the wire and a three-boat shoot-out for the final race. However, Sonic (THA), after hearing over the radio the final race was not to happen, turned it off and headed back to the marina, missing the next radio call which rescinded the first. Re-capping that moment before heading out this morning Kirati Assakul said “I won't turn off my radio this time until I am back onshore after the racing has finished, and I'm in Bangkok!”

That proved to be a very wise decision as Sonic won the first race of the day by just three seconds to level the series with Cedar Swan (THA) with the final race set to decide the title.

The longer second race for the Ocean Multihulls, however, favoured the handicap of the smaller Cedar Swan who was the run away winner by almost 8 minutes on corrected time, and with that won the class title by a single point over Sonic and License to Chill (AUS) in third.