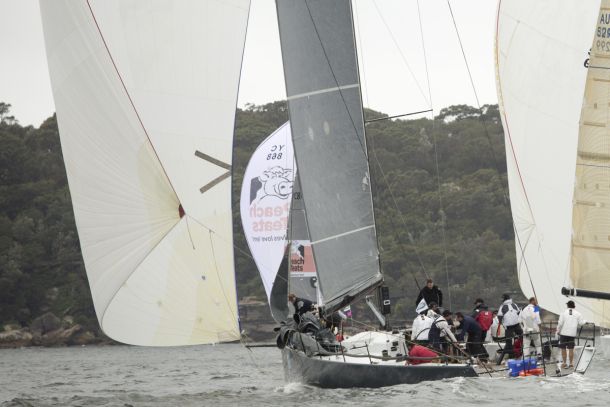 Another grey and wet Sunday on Sydney Harbour failed to dampen the enthusiasm of the fleet contesting the Cruising Yacht Club of Australia’s Land Rover Winter Series.

Sam Haynes had a perfect start to his new grand prix campaign with the latest addition Celestial, the TP52 he purchased from Rupert Henry this year. Celestial picked up first place ahead of Victoire (Darryl Hodgkinson) and Brindabella in Division A1.

“The new boat is awesome and we’re really enjoying sailing it,” Haynes said from the CYCA this afternoon. “We just pipped Victoire at the end. She got a little puff and nearly caught us,” he said after their 31 second victory over Victoire once the handicaps were applied.

“It’s more tender than the Rogers 46 I had; it’s a step up and we’re learning to sail it. I plan on sailing this Series every two weeks to keep us ticking along and hopefully we’ll be ready to defend the title we won last July with the Rogers 46,” he said of the Land Rover Sydney Gold Coast Yacht Race (LRSGCYR), the first of the CYCA’s Blue Water Pointscore Series.

Haynes was pleased to note that he beat a number of his LRSGCYR contemporaries today, adding some confidence to his upcoming defence.

Following winning Division A2 last week, Warwick Sherman and his Occasional Coarse Language Too backed up with a second place, sure to hurt his handicap. But if he keeps sailing well, it should not be a problem. Sherman was beaten today by the new Little Nico, a sexy looking Robert Shaw 11 metre design owned by Adrian Walters.

However, it was not smooth sailing for all, as a handful later discover they had sailed the wrong course, turning some from roosters to feather dusters. Those who realised retired, while others would be disqualified.

“The day had all the signs of being miserable all day, but surprisingly, the rain was light and not lengthy, although it was overcast all day,” Principal Race Officer Robyn Morton said. “Most of the race the wind came from the south. The fleet of nearly 100 started in 10 knots and it averaged 10-12 knots throughout, although we did record gusts of around 20 knots, which caused damaged to some. We saw a couple of boats with shredded headsails. An expensive day out.”

Unusually, in Divisions B, E, F, K and JI, last week’s winners stumped up again, giving each one a clean scoresheet.

It did not end there for Missiris either. The Sydney yachtsman’s winning streak continues. In March he won a New Zealand holiday cruise, last week he was drawn to experience the Land Rover and this week his name came out as the winner of the Noakes prize. They say luck rubs off, so one can imagine how many people would be approaching Missiris this afternoon.

Lachlan Irwin was thrilled to find yet another Sunday of breeze, enough to propel his Cape 31, Clewless? to Division E victory for a second week. The yacht’s owner, Guy, was not aboard however, leaving his son Lachlan in charge.

“I wish I could claim the win, but I’m in Byron Bay doing a big swim,” Guy said laughing.

Lachlan was excited not just by the wins, but because this week he was drawn as the winner of the Land Rover drive experience. “We had a blinder of a day – they were our conditions – you have to take advantage of these things when you can,” Lachlan said. “It was good not to break gear this week. Last week in bigger, gustier winds we snapped our prodder in half on the run to the finish. Thankfully we were able to hold on to win. This week the wind peaked at about 15 knots, apart from the odd bigger gust.

“I think we’ll be punished by the handicapper next week, but having said that, a few of our division were in close contact with us, so maybe it won’t be so bad. It was a bonus to find we had won the Land Rover Range Rover Evoque for a week; I’m looking forward to driving it,” Lachlan ended.

For a second week, Steve Wyatt triumphed in Division F, while in Division K, Herman Heiligers steered Hubcap II into pole position ahead of the Karen Hawkett skippered Broulee, a Beneteau 305. A matter of just 23 seconds made the difference between the top two. In Division J1, L’Attitiude (Jon Short/Rob Hunt/Miles Bastick) also came up trumps again.

Weekly prizes are awarded to first, second and third placegetters in each division and include exclusive CYCA Land Rover Winter Series merchandise. One lucky division winner each week is drawn to receive a Land Rover Range Rover Evoque experience for a week. In addition, the Noakes Group is providing a lift stand launch and two free laydays for one lucky division winner each week. Noakes’ Sean Langman has three N26’s entered in Division G of the Series and will enjoy a race within a race each week.

Next Sunday May 10 is Race 3 of the Land Rover Winter Series.