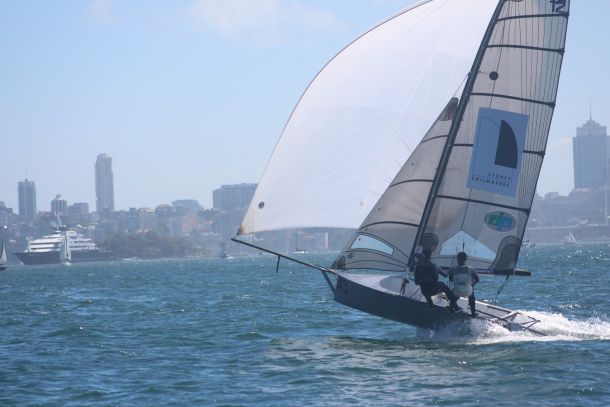 Following on from winning the NSW 12ft Skiff Championship in November, the in-form Nick Press/Andrew Stevenson pushed Sydney Sailmakers to a stunning start on Sydney Harbour in Race 1 of the 12ft Skiff Interdominion and galloped away to win by a huge margin.

Sailing from the start near Shark Island to the first mark, the Beashel Buoy in a building nor’easter on a wavy Harbour, Sydney Sailmakers initially led Brett Hobson/Brad Phillips sailing Geotherm (second at the NSW Championship) and the Kiwi entry, Little Bus (Chris Reid/Andrew Clarke).

The trio seemed to be extending away from the rest of the Aussie and Kiwi fleet competing in the 55th running of the annual stoush between Australia and New Zealand and held alternately in each country. Eventually Alex Vailings/Fraser Brown on C-Tech White (NZL) found the overtaking lane and left their countrymen behind on the run back to Shark Island, while Sydney Sailmakers distanced itself from the rest, her crew not putting a foot wrong.

By the second run to Shark Island, the seaway and increasing breeze had taken its toll, causing frequent capsizes and some breakages. Unlucky was one of the crew aboard Cougar, who after a capsize was struggling to move with a reoccurring pinched nerve and back problem.

As a number rushed to assist, Geotherm capsized and C-Tech White hit a mark, leaving the gate open for Little Bus to steam through, but there was no catching Sydney Sailmakers who stormed home to win by over two minutes to Little Bus. C-Tech White was third and an unhappy Brett Hobson skippered Geotherm to fourth.

Cautious as ever, Press said of their win, “In the end we had a good win. The first two works were tight with Geotherm and the Kiwis. We kept it simple and didn’t make any major mistakes and had some fun rides along the way.

“It’s definitely good to win – you can’t ask for a better start to a regatta,” Press said.

“A perfect first day,” said Little Bus skipper, Chris Reid. “We’re happy to kick of the Interdominion with a second.”

In response to Sydney Sailmakers’ big win, Reid said: “Every squirrel gets its nut and tomorrow is another day. Those guys know the Harbour really well, but I’ve sailed on it a few times too – and it’s anyone’s on the right day.”

Most chose to use their number three rigs, but the only female in the fleet, Adrienne Cahalan and her crew Brett Phillips (Chapman High Performance Sailing), went with the smaller number 4 rig and finished 20th.

“We had a good day, but we had a swim at Bradley’s Head – it was costly and shouldn’t have happened,” said Cahalan, a world-class navigator.

In all, six boats did not finish, putting them on the back foot for tomorrow’s Races 2 and 3, starting from 2.30pm.

The 12-race 12ft Skiff Interdominion is hosted by the Australian18 Footers League at Double Bay, assisted by the Double Bay Sailing Club and will conclude on 10 January, 2015.