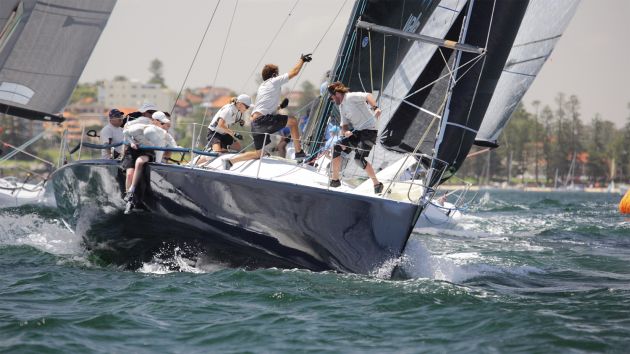 SYDNEY – Australia has been very supportive of the Farr 40 Class Association since its inception in 1997.
Victoria native John Calvert-Jones was one of the original owners and the past class president would skipper Southern Star to victory at the 2000 World Championship.

Calvert-Jones, who received a tremendous honor by being named the first Life Member of the class, was the first of many owners from the Land Down Under. Richard Perini, Neville Crichton, Guido Belgiorno-Nettis, Marcus Blackmore, Lang and Sue Walker, Lisa and Martin Hill, current Australian Yachting president Matt Allen and wife Lisa along with many other Aussies have all been stalwarts of the class.

Australia's stature as a hotbed for Farr 40 one-design racing was solidified in 2005 when the International Class Association selected Sydney to host the 2005 Rolex World Championship. That move was inevitable after the fleet on the country's East Coast grew considerably following construction of Farr 40-footers was established at McConaghy and later in Malaysia.
Perini steered Evolution to victory at the 2005 Worlds, nipping countryman Crichton and Team Shockwave via tiebreaker. Sydney again hosted the Rolex Farr 40 World Championship in 2011 and this time it was Belgiorni-Nettis and the Transfusion team that came out on top.

This country's excitement surrounding the Farr 40 has never waned, evidenced by the number of boats still sailing and the strong season circuit that exists. A deep fleet of 10 boats recently contested the Australian Open Series with Transfusion taking the title.

Sydney will be back in the spotlight this month when it serves as site for the 2016 Rolex Farr 40 World Championship. Royal Sydney Yacht Squadron will host the renowned event for the second time with a talent-laden fleet of 12 boats slated to compete from Feb. 16-19.

“We are delighted to accept the role of hosting such a prestigious regatta. The Squadron has a long association with the Farr 40s, having hosted numerous major regattas – highlighted by the 2011 Worlds,” commodore Richard Chapman said. “We are looking forward to renewing friendships with many owners and crew who have previously sailed out of the Squadron.”
Action will commence this week with the three-day Sydney Open doubling as the Pre-Worlds. All the top contenders will be testing sails, adjusting rig tune and gauging boat speed relative to the competition.

Headlining the fleet are three boats that have been battled-tested by many wars on the Farr 40 International Circuit – past world champions Flash Gordon 6 (2012) and Plenty (2014) along with multiple podium placer Struntje Light.

New York skipper Alex Roepers and the Plenty team enjoyed a dream season in 2014, winning the Circuit Crown then taking the Rolex World Championship on the waters of San Francisco Bay. Things didn't go quite as smoothly last year as Plenty did not win an event and placed second to Groovederci by a mere one point at the 2015 Worlds.

Roepers said crew work and boat speed were not issues last season, noting that a lost protest doomed Plenty at the Rolex Farr 40 North Americans while a Z flag penalty for being over the start line early proved costly at the West Coast Championships. Plenty opened the circuit with a runner-up result at the Midwinter Championship and closed by coming up just shy of defending its world title.

“I prefer to look forward rather than backward, but the short story is that we were victims of a string of unfortunate events last season. We controlled all the variables we could. We just made some minor, but very costly mistakes,” Roepers said. “For the most part, we sailed the boat just almost as well in 2015 as we did in 2014. Other than a couple disappointing races, we put up winning score lines.”

Tactician Terry Hutchinson, jib trimmer Morgan Trubovich, main trimmer Skip Baxter and the rest of the team return intact with Roepers eager to make reclaim the crown. “We are as motivated as any team. Terry and the crew are in Australia as we speak fine-tuning the boat and sails,” said Roepers, who arrives in Sydney on Thursday morning.

This will mark the second time Roepers has raced out of Sydney, having competed in the 2011 World Championship. “I am continually impressed by Alex's ability to show up and sail the boat at a high level,” Hutchinson said of the Atlantic Investment Management founder.

Struntje Light closed the 2015 campaign on a high note, placing third at the Rolex World Championship that was held off Long Beach, California. German surgeon Wolfgang Schaefer, among the most popular and respected owners in the class, steered the boat to victory in three of 11 races while placing second in two others.

Plenty covered Struntje Light throughout the final race in order to protect a one-point lead in the regatta, but the tactic proved costly to both as Groovederci placed second to slip passed both in the final standings.

“We were pleased with how we sailed at the worlds and that was a great result for the team,” said Schaefer, who campaigns the boat along with his wife – Dr. Angela Schaefer. “It was very tight racing and the last race produced a photo finish. Rolex video showed us slightly ahead, but that does not count. That is Farr 40 sailing – very close and the regatta is never over until you have crossed the finish line of the last race.”

Schaefer is returning to Australia for the first time since securing victory in the Corinthian Division at the 2011 Worlds. The Lueneberg resident recalled the Royal Sydney Yacht Squadron doing a “fantastic job” of hosting the regatta and was eager to come back.

“This 2016 campaign will be a completely new game. Unusual for the European and American boats, this season will start with the worlds and none of us have any idea how we will place in this fleet,” Schaefer said. “The Australian boats have already done most of their season and know where they stand. That is an advantage for them and an extra challenge for us that will make the regatta even more exciting.”

Coming off an impressive victory at the Australian Open Series National Championship, hosted by Middle Harbour Yacht Club, Transfusion would appear an early favorite going into the Rolex Farr 40 World Championship. However, Belgiorno-Nettis has been competing in the class too long to put much stock in that result.

“We have been working very hard to get the crew and boat organized. We are on the right path, but we are not there yet,” Belgiorno-Nettis said. “Flash, Struntje and Plenty are veterans of the International Circuit and I expect them to be the benchmark. We are very anxious to see how we stack up against them. Pre-Worlds is the last chance to really test ourselves and we will see what the standard is.”

Renowned tactician and four-time Farr 40 world champion John Kostecki, winning skipper of the 2001-2002 Volvo Ocean Race aboard Illbruck Challenge, has come board Transfusion as tactician and helped take the team to another level.

“John is a very tough taskmaster who expects everybody to be at the top of their game and to perform their job capably,” Belgiorno-Nettis said.

Transfusion defeated Walker and the crew on Kokomo by five points at the Australian Nationals, which were held late last month. “While we are very happy with that win, the final score line is not indicative of how competitive the regatta was. We have not come close to reaching our peak, and that's a good thing because we will need to be at our very best to win the worlds,” Belgiorno-Nettis said.

Estate Master, sailed by the husband-wife team of Lisa and Martin Hill, placed third at nationals – 11 points astern of Kokomo. Martin Hill called that result a “wakeup call” and said a revamped crew was not in sync.

“We went from first to last in one race because the spinnaker went over the bow, which was not good. We are working to get some of our old crew back for worlds in order to address that problem,” Hill said. “One positive we learned from nationals is that our boat is still fast.”

Veteran professional Chris Larson is calling tactics on Estate Master, which was runner-up to Plenty at the 2014 Rolex World Championship. The Hills sailed the boat to fourth place at the 2011 Worlds off Sydney.
“Chris is a very capable tactician and we fully expect he will get the crew mechanics sharpened. We have a lot of training sessions scheduled between now and worlds,” Hill said.

Hill noted that every race of nationals was held on short courses set inside Sydney Harbour while the world championships will include offshore racing of longer distances. Principal race officer Rob Ridley intends to utilize both the Manly and Macquarie circles on the Pacific Ocean to give the fleet some variety.

Ridley has been a race officer for all the Farr 40 national championships hosted by the Royal Sydney Yacht Squadron and acted as assistant to Peter Reggio during the 2011 World Championships. Ridley earned ISAF International Race Officer certification five years ago and has overseen many major events since doing so.

Commodore Chapman said prevailing winds off Sydney in February are from the northeast and range from 10 to 20 knots. However, cold southerly winds are not uncommon this time of the year while there is also the occasional westerly.
“Wind and sea conditions area quite variable and not very predictable,” said Jeff Carter, who skippered Edake to the Corinthian title at the 2016 Australian National Championship.

Carter took delivery of Edake two months before the 2011 Worlds and was not quite up to speed as a result. He's a 10-year veteran of the class, having previously co-owned a boat.

“It has been a long haul. We have seen the back end of the fleet then the middle and now the front,” Carter said. “My team is really looking forward to the opportunity to compete in another world championship regatta. I have no doubt the international boats will set the pace, but the Australian class is very competitive. Our goal is to capture the Corinthian Trophy, but I would be ecstatic if we could find a way to finish in the top five.”