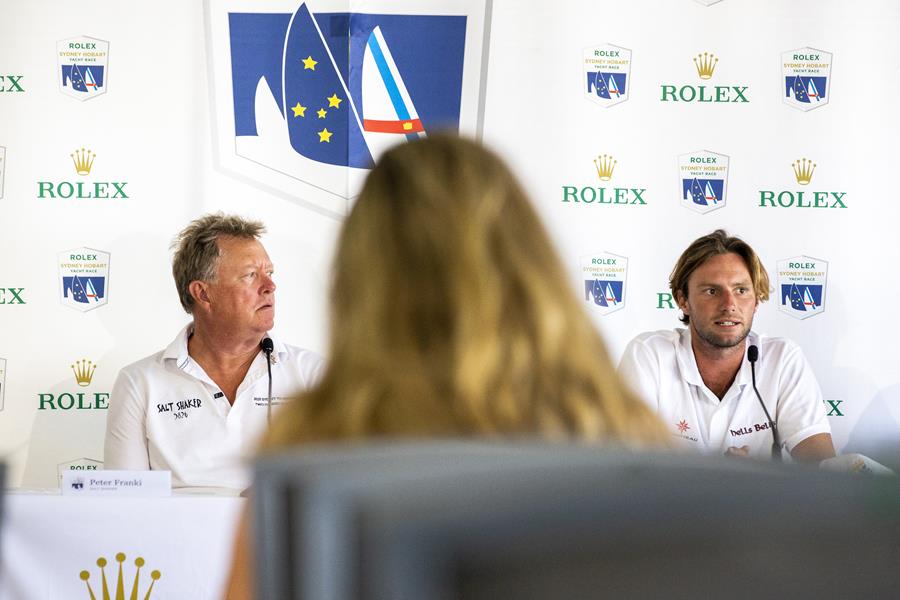 For Lincoln Dews, the challenge of racing in the Two-Handed Division of the 2021 Rolex Sydney Hobart Yacht Race will not only be historic, but “enormous” – for him, his crewmate and his rivals.

The Two-Handed Division is one of the most highly-anticipated battles within the 76th edition of the race. It was to have been contested for the first time last year until COVID-19 led to the race being cancelled. But a year on, interest in the shorthanded crews has only grown.

The division of 18 entries, from the total fleet of 94, will challenge for the inaugural trophy, awarded to the Overall winner on IRC handicap.

It’s clear what racing in the 628 nautical mile Rolex Sydney Hobart means to the two-handers, judging by the comments of Dews and fellow racers at the Cruising Yacht Club of Australia in Rushcutters Bay on Tuesday.

“This is one of the great races of the world. To be able to do it in this [two-handed] category is amazing,” said Queenslander, Dews, who will sail Hells Bells (owned by his father Geoff), with Andrew Scott, who won the 2014 Rolex Sydney Hobart with Roger Hickman on Wild Rose.

“To get to Hobart will be amazing; and to be able to get there on a small boat is too. It’s such a tightly contested field because everyone’s ratings are so close.

“The boat speeds are so close. There are so many opportunities to make mistakes. To gain places over four days … there is going to be some really exciting and close racing.”

Hells Bells is one of two in the division racing for charity – the other being Rogue Wave, owned by Kevin Le Poidevin, whose co-skipper is Adelaide yachtsman Darrell Greig. The pair will raise money for the Brain Tumour Alliance Australia and Soldier On charities.

Dews and Scott will support the Shake It Up Foundation, for which Lincoln became an ambassador after his father was diagnosed with Parkinson’s disease almost three years ago.

Dews, who, like his family, has spent much of his life sailing, surf lifesaving and stand up paddle boarding, is also driven to race hard for the victory.

Having now sailed the boat to Sydney from Queensland, the 26-year-old is ready.

“There are a lot of different aspects to the Two-Handed Division,” Dews said.

“Fitness is certainly one of them, but there is a lot more than that. A lot of knowledge is required.

“There are a lot of things going on in the boat all at one time. Andrew Scott and myself bring a lot of diversity to the program.

“We have both done a lot of different amounts of sailing – Andrew has been to Hobart a lot more times than I have. Together we bring a unique element.”

Victorian Rod Smallman, who will sail with Leeton Hulley on Maverick, a Jeanneau Sun Fast 3600, is another entry with some handy offshore sailing under the belt.

He and Hulley only arrived in Sydney from Melbourne at 8.30am this morning. Smallman’s two-handed pedigree includes a third place in the 2018 Melbourne to Osaka Race over a course of 5500 nautical miles.

“Experience is good. In a 5500 mile race, the biggest thing we learned was our own welfare, to make sure we are always trying to bank sleep when we can,” Smallman said.

Peter Franki owns the Sydney 36 Cruiser Salt Shaker, which he will sail with Drew Jones. The Sydney sailor believes sleep management will be a major factor.

“Fatigue is something that concerns us both,” he says, adding they are yet to settle on a final sleep plan.

“We haven’t really looked at anything there yet. We just have to sleep when we have to. Drew recognises that and has generously decided to let me sleep when I need to.”

Anto Sweetapple, who will sail on the BH36 Local Hero with owner Mark Ayto, says their focus will be to economise their energy output.

“The important thing for us is to improve our efficiency,” says Sweetapple.

“It’s about fatigue management. If you can reduce the amount of energy into whatever sail change, or sail drop or reefing, it leaves you fresher for the rest of the race.”